Tecno Mobile is all set to launch its new phone in India next week. Company has now started sending media invites for an event to held in Delhi on October 11th. Tecno is promoting this phone with the tag line “Spot the Dot” and #PricelessDot. As of now, no other details have been revealed yet. However, we are sure that Tecno Camon 12 Air smartphone having a dot-in display (punch-hole display) is coming to India. The phone comes in Ocean Blue and Alpenglow Gold colour options.

Tecno Camon 12 Air will have a 6.55-inches HD+ Dot-in (Punch Hole) display with a resolution of 720×1600 pixels, Aurora gradient design and 90% perfect edge-to-edge ratio for excellent low light photography. The smartphone comes equipped with an Octa-core MediaTek’s Helio P22 chipset (4×2.0 GHz Cortex-A53 & 4×1.8 GHz Cortex-A53) with PowerVR GE8320 GPU, 3GB RAM and 32GB of internal storage. The phone also comes with an option to expand the storage up to 500GB via microSD card. 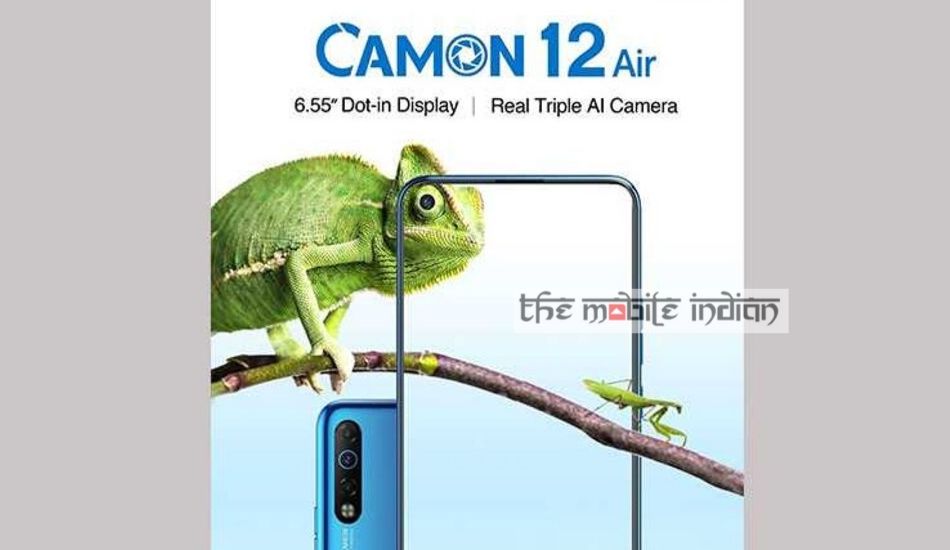 The smartphone has AI triple camera setup with the combination of 16-megapixel as the primary sensor, a 5-megapixel as the secondary sensor which brings 120° Super Wide Angle shots and a 2-megapixel depth sensor for Bokeh effect alongside Quad-LED single-tone flash. On the front, it has an 8-megapixel clear selfie camera with 3D stereoscopic facial beauty feature, AI beauty mode and Video beauty mode. It also has a rear-mounted fingerprint sensor. Other sensors include G-sensor, Ambient light sensor, Proximity sensor and Electronic compass.