Byond has introduced a new smartphone in the Indian market, called Phablet PI. The new Byond Phablet PI, which is priced at Rs 10,999, arrives with a 5.3-inch touchscreen display and dual-core advanced processor inside. In terms of design, the Byond Phablet PI resembles a lot like the Galaxy Note II but this one is a totally different package.

The Phablet PI, with dual-SIM and dual standby feature, runs on Android 4.1.1 Jelly Bean operating system and sports a quarter HD (540×960) pixel resolution natively. It has a dual-core 1 GHz advance processor. We though are not aware of the model number of the phone.

The handset boasts 1 GB RAM, 4 GB on-board storage and micro SD card slot. By default, the phone can handle two GSM SIM modules out of which only one will be active and other will be on standby mode. One of the SIM slots will support a 3G network SIM module. 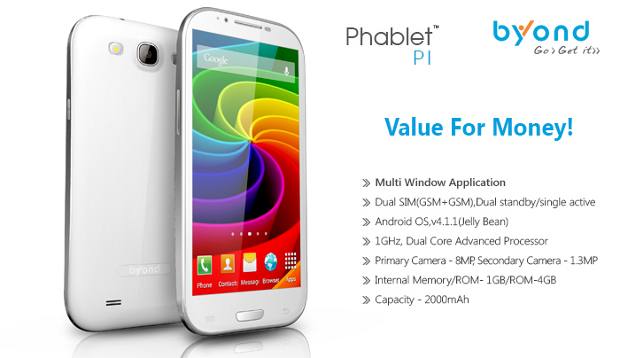 At the rear Byond Phablet PI has an 8 megapixel camera with flash for imaging on the move. In the front lies a 1.3 megapixel camera for clicking self portrait photos and video chat. Other features of this phablet include WiFi and Bluetooth. Measuring mere 9.7mm thick, the Phablet PI weighs about 188 grams heavy along with the 2000 mAh battery included.

With quite interesting bunch of hardware clad Phablet PI will clash with the likes of the Micromax Canvas 2 and Canvas HD phablets in the budget segment.