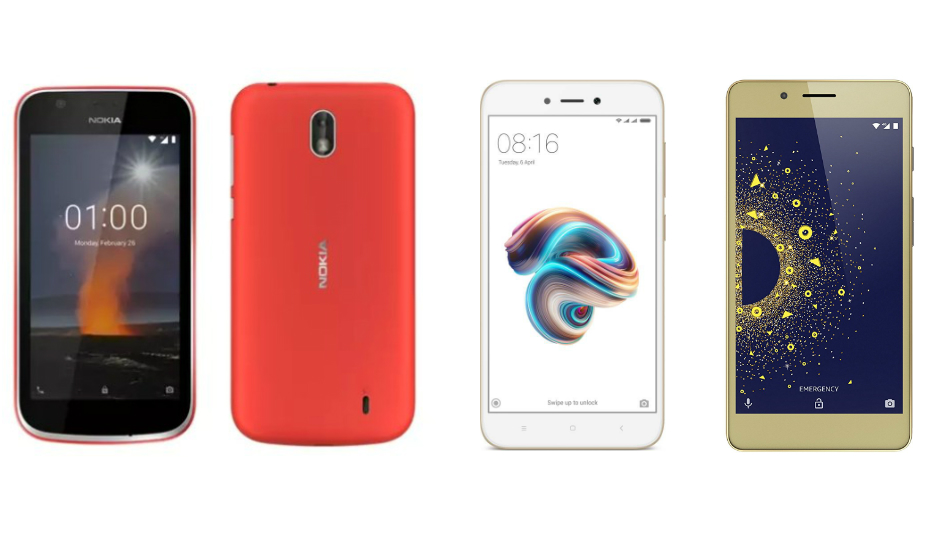 All three of these Android phones feature displays of around 5-inches and are priced under the Rs 6,000 price bracket.

The Nokia 1 smartphone has just been launched as HMD Global’s take on an entry-level handset, the second of its kind to run on the Go Edition of Android Oreo. Running on an ecosystem that claims to deliver an optimized experience in budget category with lightweight versions of Google apps and services, the Nokia 1 fits in smartly as one of the handsets to be considered when picking up an affordable smartphone.

We’ve thus decided to match the latest Nokia 1 device with two of the most significant budget handsets that are currently available in India. Here’s an in-depth comparison between the Nokia 1, Redmi 5A and Amazon’s own 10.orD.

The entry-level Redmi 5A sports an all-metal unibody with dual pyrolytic graphite sheets that have been Xiaomi’s trend ever since it released the Mi A1. Though the design looks a lot like any other device on the market with a Rose and Gold finish, it still looks a tad bit cleaner than the metallic finish on the 10.or.D which is crafted by Amazon. The 10.or.D’s only give-away is the gold finish on the front side of the variant while its Beyond Black edition stays clear on any weird remarks.

The Nokia 1 distinguishes itself from these two for being built on a polycarbonate case which might look less sturdy by can be replaced without any significant expense. Keeping that in mind, the Nokia 1 is still years behind if has to earn design points and the cheapness shows.

The latest HMD-made Nokia 1 device comes with a 1.1GHz quad-core MediaTek MT6737 SoC with 1GB of RAM and 8GB of internal storage. Xiaomi has enabled a more powerful 1.4GHz quad-core Snapdragon 425 processor with 2GB of RAM on its cheapest variant. While the Redmi 5A and 10.or.D both feature the same Qualcomm chipset with the exact same 500MHz Adreno 308 graphics unit, the one thing that differentiates the two is the faster 3GB RAM on the Amazon crafted handset. Another thing to be noted is that entry variant of the Redmi 5A only equips 16GB of internal storage while the 10.or.D has 32GB of onboard storage.

In terms of connectivity, all three devices come with 4G VoLTE, Bluetooth, Wi-Fi 802.11 b/g/n and GPS as well as a micro USB and a 3.5mm headphone jack.

The 10.or.D runs on the not-so-latest Android 7.1.2 which gives a smooth performance due to its near-to-stock Android interface. The Xiaomi Redmi 5A also runs on Android 7.1 Nougat but its overlapped by a heavy MIUI 9 firmware which is known to run smoother only on high-end Xiaomi lineup. On that note, the Nokia 1 stands a step ahead considering it runs on Android Oreo and is among a handful of devices to do so at this price point. The implementation of Android Go means the Nokia 1 will be able to run lite versions of Chrome, Gboard, and YouTube with ease and thus save storage space and data consumption as well.

The Nokia 1 sports a 5MP rear fixed focus lens with an LED flash and a 2MP camera for video calling and selfie purposes. While that seems more than justified for a device at this price, the 10.or.D and the Redmi 5A offer a lot more for the same value.

The 10.or.D with its 13-megapixel camera with f/2.0 aperture offers a decent photographic experience with various camera modes like Auto, HDR, Night, Portrait, Landscape, Sports, Flowers, Backlight, Candlelight, Sunset, Beach, and Snow. For selfies, it packs in a 5-megapixel sensor with a f/2.2 aperture which is average at best.

Probably the best snapper out of these three is the Redmi 5A which comes with a 13MP rear camera with PDAF, LED Flash, f/2.2 aperture and 1080p video recording. There’s a secondary 5-megapixel snapper at the front with f/2.0 aperture which offers similar selfie experiences as in the 10.or.D.

While the 3,000mAh battery on the Redmi 5A doesn’t disappoint, the 10.or.D packs a bigger 3,550mAh power unit which on a stock-is Android interface will last longer than its Xiaomi counterpart. The Nokia 1, again in this department doesn’t hold its head as the latest entry-level handset only packs a mere 2,150mAh battery, which might turn out decent keeping in mind, the device is powered by Android Go which wouldn’t drain the battery much.

Even though all these devices are good on its own for the price they’re available at, it comes down to what a user wants from their device. While the 10.or.D offers the best battery and hardware configuration at the given price bracket, the Redmi 5A offers a good camera setup with a sleek design and a compact display. Though not exclusive to what it offers, the Nokia 1 is smoother due to its Android Go firmware that’s based on the latest Android 8.0 Oreo.

Considering all that, the Nokia 1 is the cheapest of them all with an asking price of Rs 5,499, which will be made available starting March 28th. The 10.or.D and the Redmi 5A are both rated at Rs 5,999, though the latter is pretty hard to grab on to.