Asus has announced that it will launch the ROG Phone 6 series gaming smartphones on July 6. 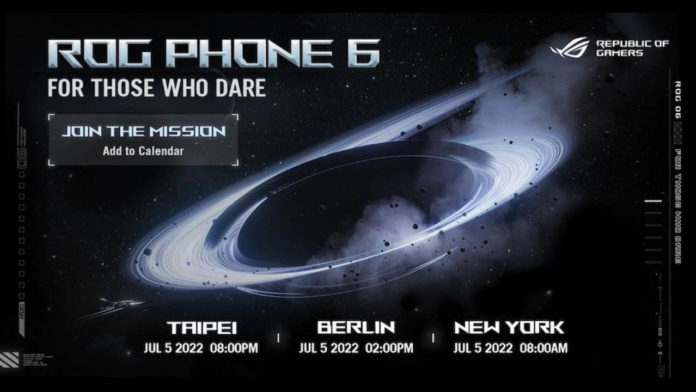 Asus is all set to unveil the next generation of its ROG series gaming smartphones. The Taiwanese manufacturer has revealed that the Asus ROG Phone 6 series will be unveiled globally on July 6. It will be a virtual launch event that will streamed across the company’s social media handles.

Asus announced via a teaser poster on Twitter, that it will be globally launching its new ROG Phone 6 series on July 5. Asus said that the virtual event will be held at 8pm in Taipei, Taiwan. Users will be able to live stream the event at different times with respect to their time zones. It will live stream at 5:30pm India Time, 2pm Berlin Time, and 8am New York Time.

Asus ROG Phone 6 series is being teased with a tagline ’For Those Who Dare’. Asus also said that there are two more things to look out for in the event including new accessories and new gaming headphones. Apart from this, the specifications of the devices are unknown at the moment, except that it has been confirmed to feature the new Snapdragon 8+ Gen 1. They are claimed to be the first gaming phones to come with this SoC.

In recent news related to Asus, the brand recently launched two new Vivobook laptops in India including the Zenbook 14X OLED Space Edition and the Zenbook 14 OLED. Further, the company has refreshed its Vivobook S 14 OLED/ S 15 OLED and Vivobook 14/ 15 notebooks with the latest hardware in India.