The smartphone will run on Android 8.0.0 Oreo operating system.

An Asus device with model number Asus Z01RD has been spotted on benchmarking website, Antutu. The listing has revealed some of its major specifications.

As per the listing on AnTuTu benchmark, the Asus Z01RD comes with a Full HD+ (2246 x 1080 pixels) display meaning it will be an 18:9 display but the screen size is not known. Besides, the listing says that the handset has Qualcomm’s Snapdragon 845 SoC, Adreno 630 GPU, and Android 8.0.0 Oreo operating system. It will come with 6GB of RAM and 32GB of internal storage. The listing has no information about its battery size and camera resolution. 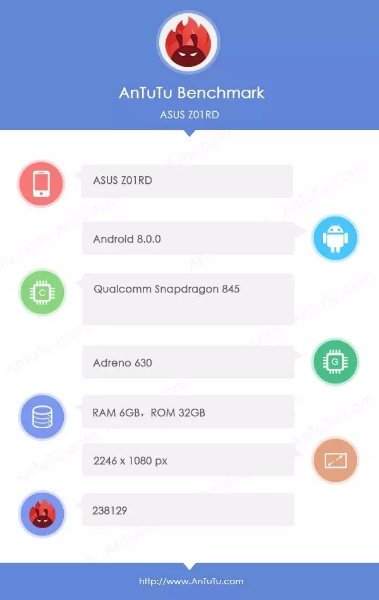 Additionally, the AnTuTu listing reveals the benchmark score of 238,129 points of the Asus Z01RD which is slightly lower than the Galaxy S9 with the same processor. For a comparison, the score of the Galaxy S9 SD 845 variant is 271,674.

As of now, the exact name of the smartphone is not known but if reports are to be believed, this could be the next ZenFone 5 phone that Asus will be unveiling during their upcoming MWC event.The company has scheduled its launch event at MWC on February 27th. The Zenfone 5 series is said to include smartphones like ZenFone 5 (2018), ZenFone 5 Lite and ZenFone 5 Max.