Android Nougat rolled out for Samsung J7 Prime in India

After recently rolling out the Android Nougat Samsung Galaxy J7 (2016) in India, Samsung has now rolled out the Nougat 7.0 update for its Galaxy J7 Prime smartphone in India, as per a report of SamMobile. The update brings some new features which include a new UX along with improved notifications and quick settings. Other changes include Dual Messenger and improved multi-window features. The Samsung Galaxy J7 Prime was originally launched with Android 6.0 Marshmallow operating system in 16GB and 32GB internal variants. 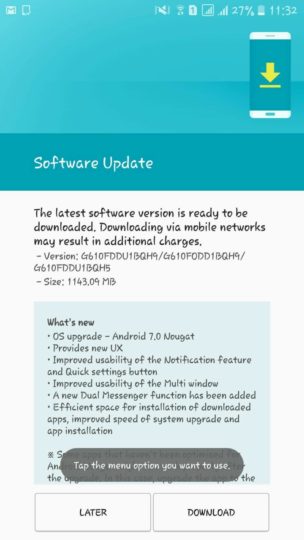 The software firmware version for this update is G610FDDU1BQH9 for the Samsung Galaxy J7 Prime and the update is sized at 1143.09MB. Do keep in mind that before you go for the downloading the update, check that battery of your smartphone. It should have at least 50% charge and 2GB of free space is available. Since the update is being rolled out over-the-air, it may take some time before it comes to your device. One can also manually check for the update by going to Settings ->About Phone -> Software Update.

For the specs, the Samsung Galaxy J7 Prime has a metal body and a 5.5-inch 2.5D glass display that comes with 1920×1080 pixels resolution and Gorilla Glass 4. It is powered by a 1.6 GHz Octa-core processor, which is paired with 3GB RAM and 16GB/32GB internal storage. An expandable storage slot is there for a micro SD card of up-to 256 GB capacity. The smartphone runs on Android 6.0 Marshmallow operating system and also offers a fingerprint scanner, which is integrated on the home button.