The cheapest Android ICS calling tablet in India but with average performance.

The Android tablet market, which was once booming, has started to see a decline ever since 5 inch and bigger screen phablets have started becoming popular. They offer better portability and features as well. Nonetheless, manufacturers are still trying their hand at bringing the lost glory back with devices that offer several features and that too at the right price point.

Go Tech has a 7 inch calling tablet in its arsenal that offers 2G connectivity through cellular connectivity along with 3G connectivity though data dongles. While the device has been priced right, lets find out how well it performs.

When it comes to 7 inch tablets there is not much that designers and manufacturers can do. The 7 inch Go Tech Funtab looks stylish with a dual tone color scheme that adds a touch of class to the device as well. The black and white glossy finish for the device looks great while the white back is also better as black and other darker shades would start showing signs of wear faster. 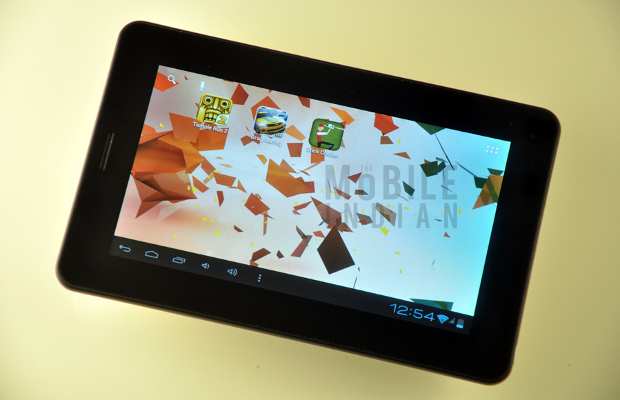 In terms of weight Go Tech has managed to keep the tablet at less than 500 grams, which comes in real handy while travelling and holding the device for long durations. The screen of the display has been protected with a scratch resistant layer, which runs edge to edge, giving the device a flush and neat front. 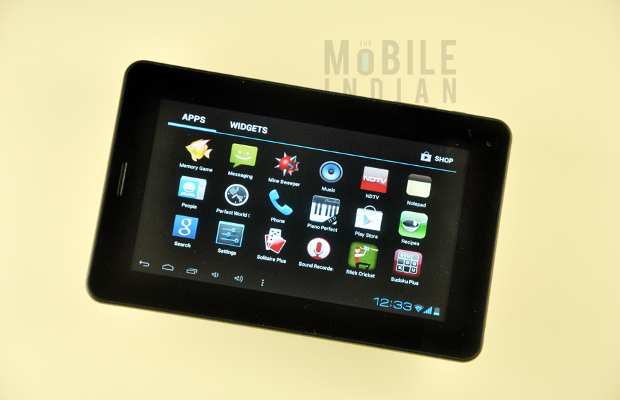 The Funtab has a simple yet functional design that combines mobile phone functionality with a tablet. The overall glossy finish adds a touch of class but with that makes the device prone to a lot of smudges as well. Quick access buttons are placed on the right side of the device, making them extremely handy to use. The buttons on the device comprise of three hardware keys in total, all of which have been placed on the right side, including the volume rocker and power /standby key, all the remaining functions and inputs are offered on the display, enhancing the look of the device.

Go Tech Funtab gets a 7 inch display that features 800 x 480 pixel resolution. The resolution is certainly on the lower side but knowing the fact that it is a low cost tablet we have no regrets with that as the display performed well in most scenarios. In terms of color reproduction the display disappoints a bit but when it comes to brightness levels it is highly impressive and complements every application or game that is run on this device. 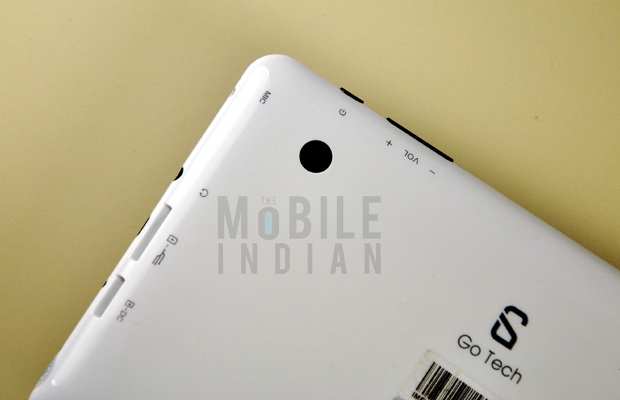 Although the resolution has been kept low, the manufacturer has incorporated a multi point touch input system in the Funtab. Multi point touch is especially important for some applications and games. The touch is accurate but the slower hardware makes it miss its location during processor intensive application usage and performance oriented gaming. 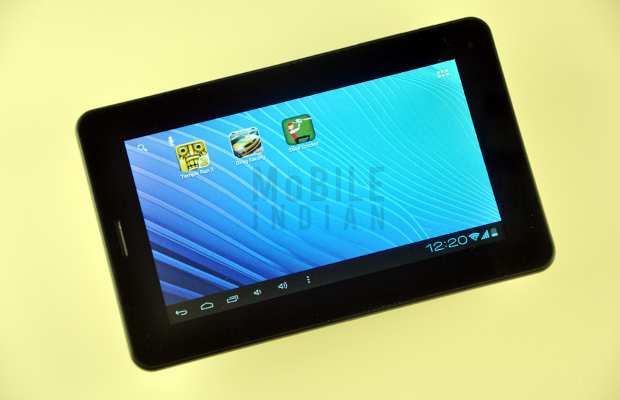 Another plus point for this device is the inclusion of a 400 MHz graphic processor, which makes the device ready for full HD 1080p video playback, but then again the display resolution is too low for enjoying high definition content and users will have to make use of the mini HDMI port for enjoying content on a bigger screen. There is no HDMI adaptor bundled in the package so users will have to buy one.

The Go Tech Funtab 2G features a single core processor based on the ARM Cortex A8 architecture running at 1.2 GHz. The processor is coupled with 512 MB of DDR3 RAM, which is the bare minimum for a device running Android Ice Cream Sandwich. The device gets a 2G cellular modem, which means that it can only connect to 2G cellular networks for data and calling. Although there is a front camera and the device is capable of 3G calling it won’t be able to do that. However, it supports 3G downloads via data cards but that is only valid for data downloads. 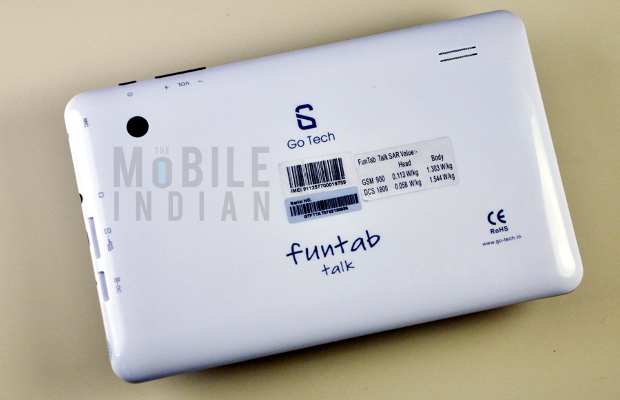 The operating system featured on the device is Android Ice Cream Sandwich 4.0 in its native state without any additional user interfaces on it. With the use of Android ICS the device has got no hardware buttons, which certainly improves its look and feel. However, there has been some customization and the unlocking mechanism remembers the last used application so that you can directly jump into the application using only the unlock button.

The Funtab, unlike other low cost products available in the market, is an official Google Play registered device, which means that it can download and run all the compatible applications. Also, it gets additional access to Go Tech’s very own Fun Bazaar for additional apps.

The device performs well under normal conditions but once you stress the device with multiple applications it starts slowing down because of the low RAM. Operating system optimization for the device is spot on and the device doesn’t face any compatibility issues. 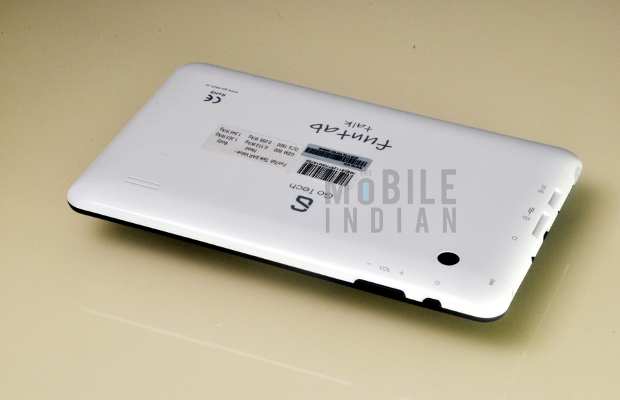 The 1.2 GHz processor is capable of handling any task, be it gaming or multimedia, with great ease but the lack of RAM memory becomes quite evident. While playing basic games the tablet runs confidently, but the moment you try playing a game like GTA on the tablet it goes for a toss. The device heats up quickly and the frame rates drop down to 4-5 frames/second.

The build quality of Go Tech Funtab is good and very similar to the quality of devices that come from brands like Micromax, Karbonn and Lava. The body features a polycarbonate shell that is both lightweight and sturdy; the device can handle accidental falls from a height of a few feet. The display is protected by a polycarbonate layer as well. The layer can protect the device from accidental falls and scratches but it would be advised that buyers get a scratch guard as the device does not come bundled with one.

The Funtab is great and speedy in terms of multimedia performance. The device supports most audio and video codecs supported by the operating system natively, plus users can easily download applications from the Android marketplace to further enhance the device’s multimedia capability. One good thing is that it includes a number of preloaded applications like Hungama, NDTV and tube mate to name a few that will keep users hooked for entertainment, plus more can easily be installed. The device features 4 GB of internal storage memory, which can be expanded up to 32 GB via SDHC cards. 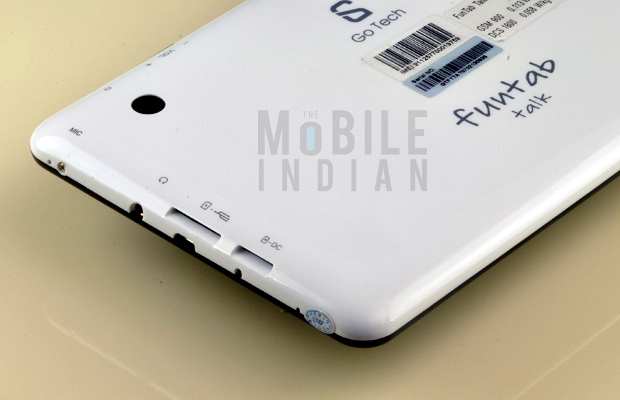 For internet connectivity the device uses 2G cellular networks, WiFi and USB dongles. WiFi is good and speedy while USB dongles and 2G networks provide speed based upon the data plan you have, and till now the faster speed data plans cost slightly on the higher side. Also, you will not need to separately purchase a USB adaptor to use data dongles or USB drives as the box includes one.

The battery level of the Funtab Talk 2G has disappointed us, but not a lot. The smaller 3000 mAh battery is small and fails to power this device for abundant time. In one complete charge the device is good for 3-4 hours of continuous usage or video playback, or up to 4-5 hours of web browsing on WiFi. The device comes with a charger, which takes around 5 hours to fully charge the device while up to 50 per cent of charge is lost within the first 3 hours of use.

Though it is the cheapest calling tablet in the market today, considering its retail price on the official sale partner Flipkart which is Rs 6,499, The Go Tech Funtab Talk 2G is good for those who seek a basic Android device for most regular tasks and nothing fancy. 3G connectivity through a dongle is not useful, especially when one has to spend another Rs 1,500 for a data dongle, for which the user might get a better tablet like the Lava Etron 3G. 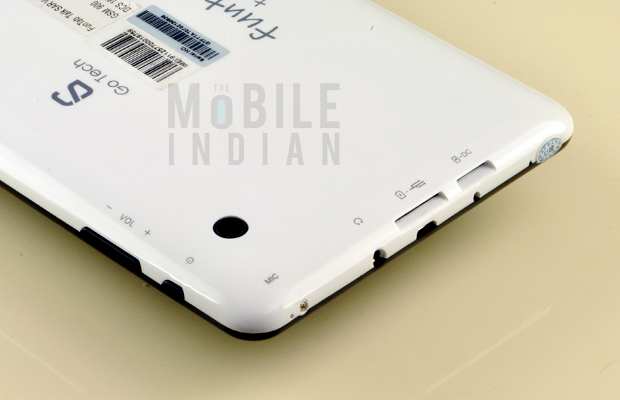 Nonetheless, the tablet is good for the price and there is nothing more you can expect for Rs 6,500.