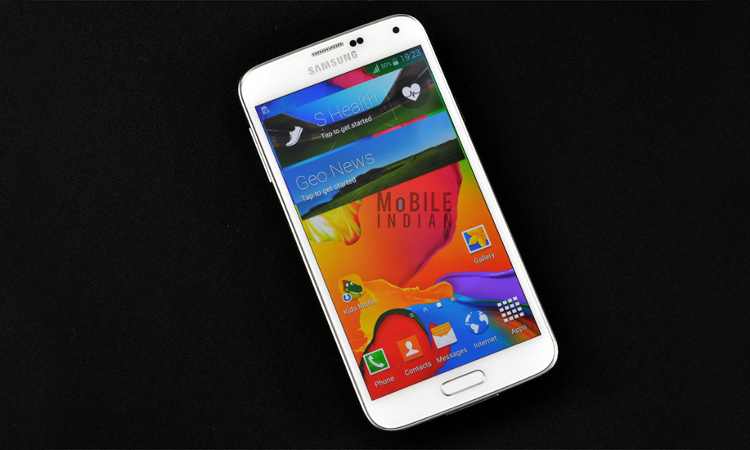 The Galaxy S5 is Samsung's first water and dust proof smartphone, marking the start of an era for Samsung.

Samsung is the leading smartphone maker of the world but its devices were always criticised for lack of innovations, sturdiness, and looks, especially in the high end segment. But in 2013, Samsung came out with a series of devices with faux-leather stitched back panel for its top and mid-tier devices. Earlier this year, it announced its new flagship smartphone – the Galaxy S5. With the S5, Samsung has introduced the fingerprint mechanism. It is also its first water and dust proof smartphone, marking the start of an era for Samsung. 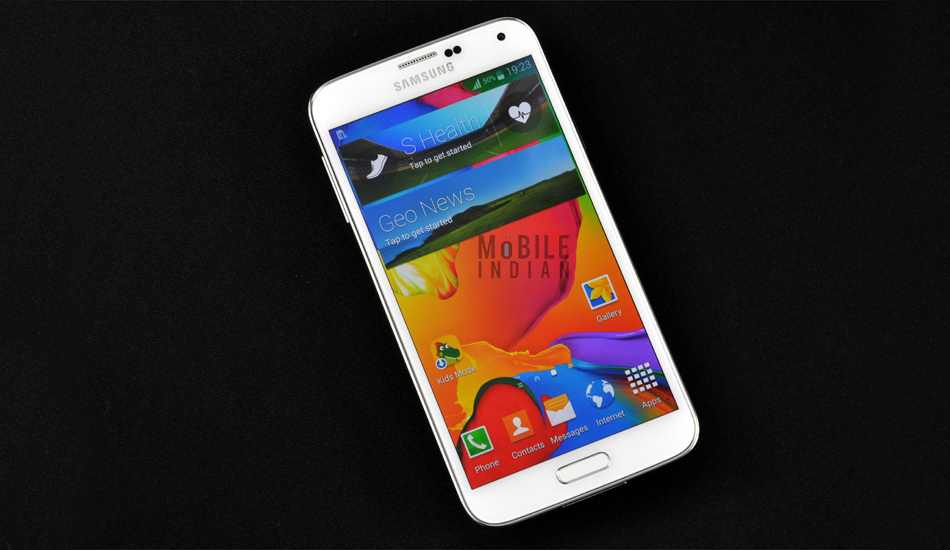 Here we have discussed the nitty gritties of the Samsung Galaxy S5 which has all the features one could look for in a smartphone at this point of time. 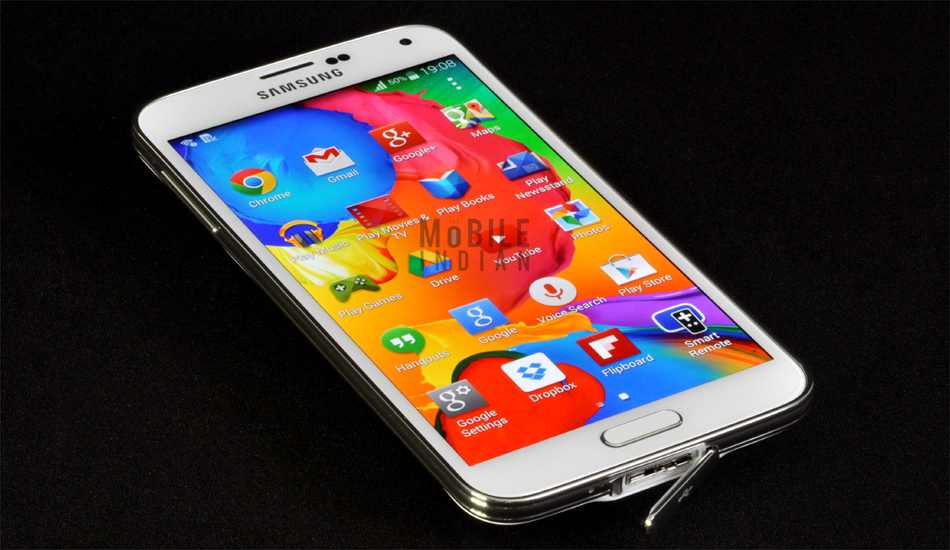 Some time back, a reader on The Mobile Indian commented that no matter the cost, all Samsung smartphones look the same. Well the Samsung Galaxy S5 is no better in this regard either. It has the same old Samsung look. The back panel is made of plastic as well but it has a textured plus rubberised finish that provides good grip and is unique to S5 only. 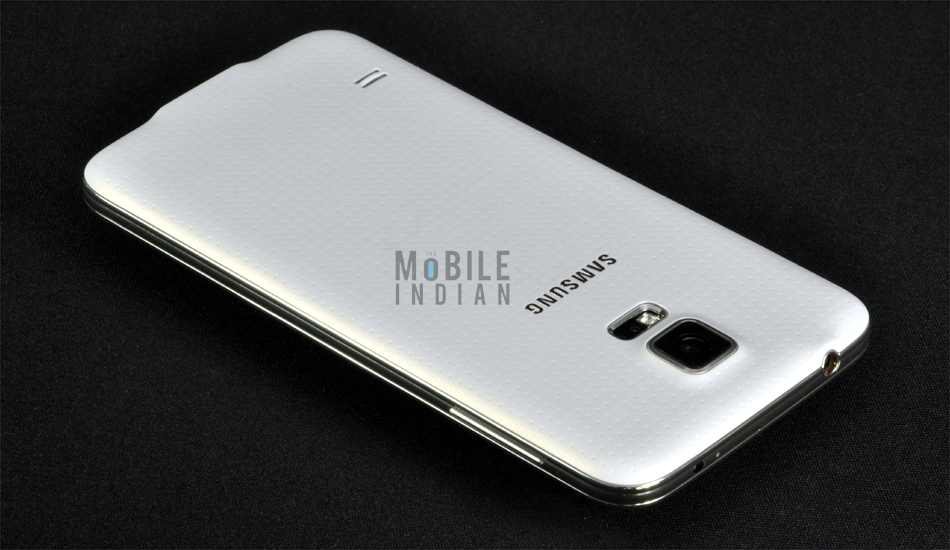 Also it is quite light (145 grams) and thin (8.1 mm). From the front, you would confuse it with any other Samsung phone as it has the same rectangular home button under the display which also acts as a fingerprint scanner. The Home key is flanked by the Recent tab and the Menu key on left and right hand side respectively. Also, you will see the conventional metallic side panel that adds the necessary spark to the phone while giving it some protection.

The volume rocker is on its left hand side while the power button is on the right and both are part of the metal side panel itself. The top harbors an IrLED port and the 3.5 mm jack. At is bottom lies a USB 3.0 port. At the back panel, just below the rear camera lies an LED flash and a heart rate sensor. The protruding camera lens though is always at the risk of getting few scratches during the day to day usage. 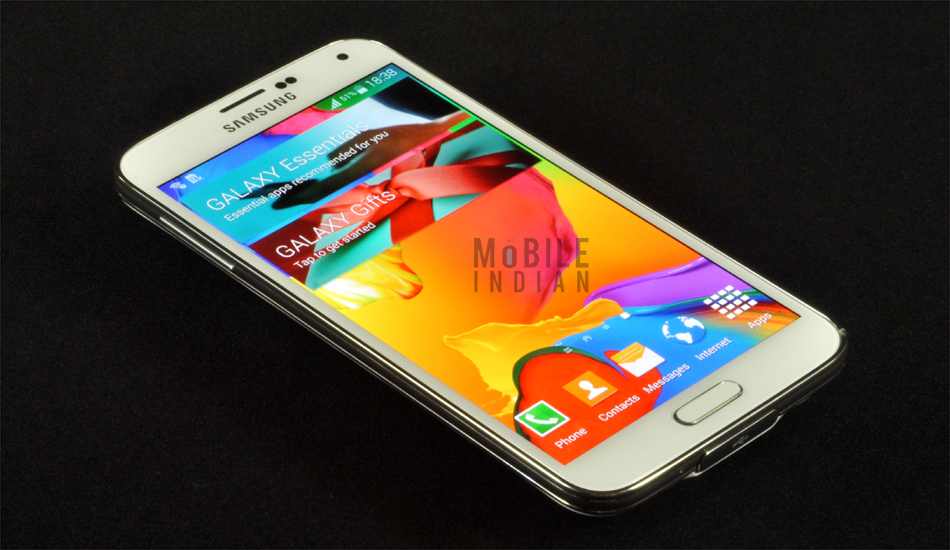 But the Galaxy S5 has something that its predecessors don’t – resistance to water and dust. The Galaxy S5 has got IP67 certification so it is resistant to water, rain, liquids, and dust. Note that in IP67 certification, the first digit (6) is given for its dust resistance capability on a scale of zero to 6 which means it has perfect protection from dust. However, in case of water resistance, the S5 gets 7 on a scale of zero to 9. So as per IP67 chart, the Galaxy S5 can be immersed up to 1 meter and for a maximum time of 30 minutes. But that does not mean you can use it under shower as it is water resistant and not waterproof. Also, the battery cover and the USB port cover must be properly closed else water would go inside the phone and will ultimately damage it.

The Samsung Galaxy S5 has a removable battery as well so in future you can replace its battery as well on your own. Plus, you can make a hard reset (though the need for the same may not arise) by just removing the battery.

The Samsung Galaxy S5 comes with a 5.1 inch touchscreen. This Super AMOLED display has huge full HD (1920×1080 pixels) resolution which means it has very good 432 ppi pixel density. The touchscreen is one of the best in the industry, reproducing colours as they are. The best thing about the display is its brightness – at maximum, even under blazing sun you won’t feel a pinch; you can also reduce its brightness to unimaginable low to save the battery. 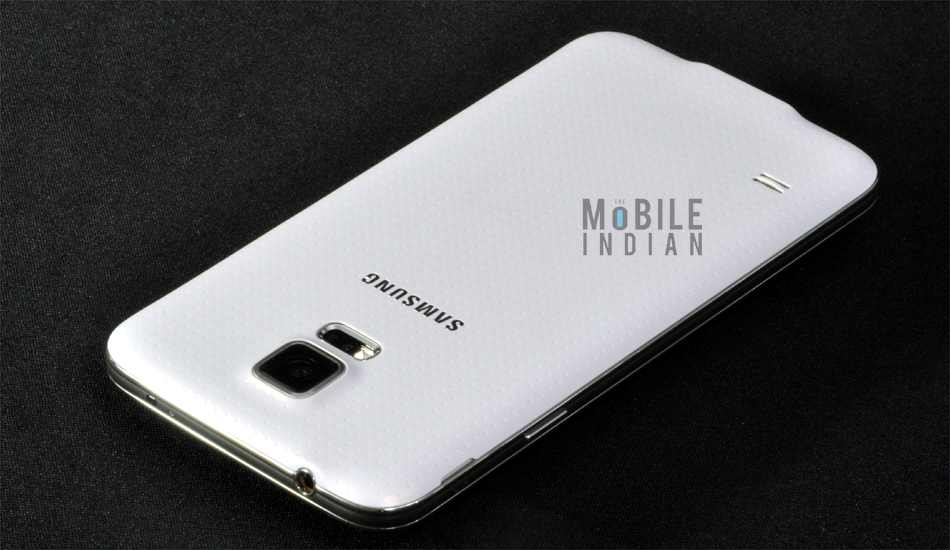 The display comes with Corning Gorilla Glass 3 coating that prevents scratches well (I tried to put some scratch on it using my bike keys too). Samsung has also provided a provision to change the screen sensitivity as well; with increased touch sensitivity, you can even operate the phone while using gloves.

Though there is not much difference in the looks, but inside the Galaxy S5 is lot different than its predecessor – the Galaxy S4. Samsung has really tried to refine the UI to make it user friendly. The first in the line is its locking mechanism. Apart from the traditional Android locking systems including pattern, password, face unlock, the Galaxy S5 comes with fingerprint unlock system. You can register up to three fingers which then would have to be backed up by a password. This gives the user the ultimate privacy. 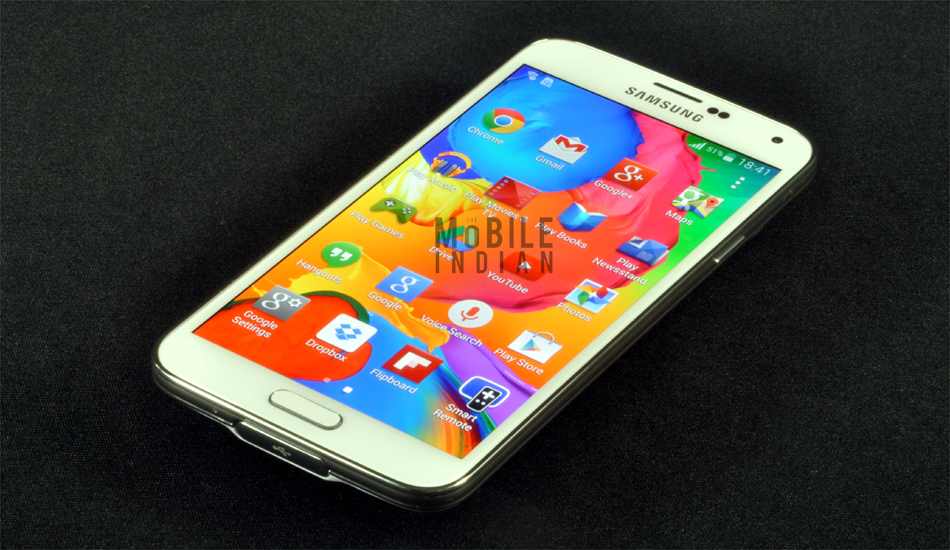 Next difference is the settings page where you can choose from List, Grid or Tab view. From here you can select any 12 items for the quick settings. To check recently close apps, you have to press the recently closed apps button located at the left hand side of the home button. In S5, the recent tab also shows the name of the app alongside, while in traditional Android devices only the app is shown that sometimes creates confusion.

It also comes with the My Magazine section which is a Flipboard like application that stacks up all your information from social sites to news etc in a magazine like format. But you can deselect it from the settings page. There is one app called “S Finderâ€ in the notification bar using which you can quickly check out any application installed in the phone without having to go to menu page. 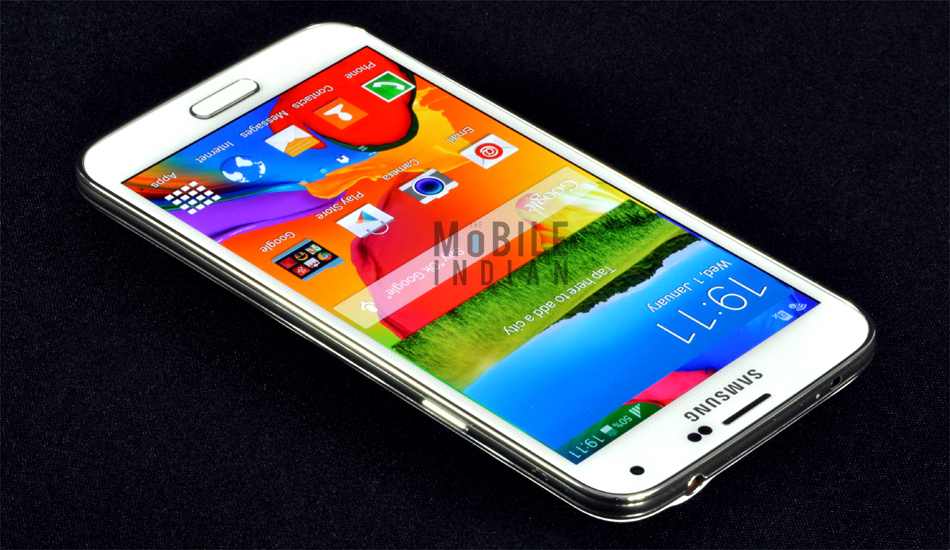 But the biggest talking point is the heart rate monitor. The heart rate sensor is located just below the rear camera besides the LED flash. To use it, you have to open the S Health app which apart from allowing you to measure your heart rate allows you keep a tab on your exercise and food habits. However, there are many apps in the Google Play which too does the same. 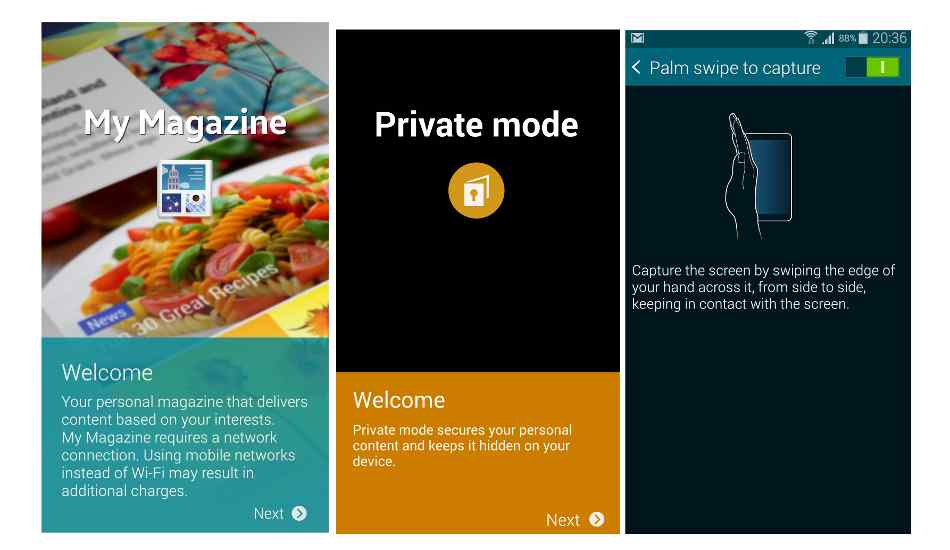 Besides, it allows users to choose between two home screen – TouchWhiz easy and TouchWiz Home. The first one brings a very simple home screen with magnified app icons. The second is the default home screen. 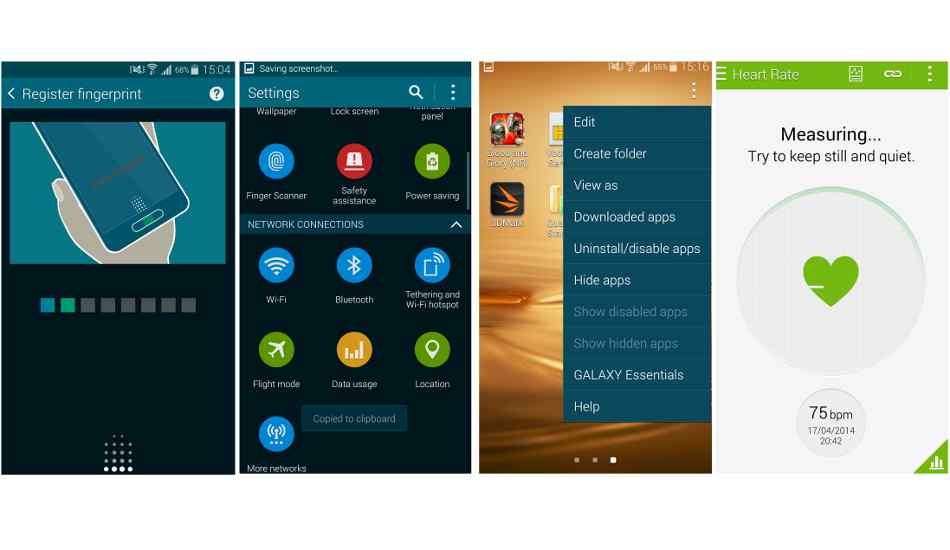 It has also the popular multi-view and S Voice. The Galaxy S5 also brings an innovative app called Toolbox which when activated opens a small circular floating icon which can be dragged to any part of the screen and when tapped it presents a set of widgets including that of camera, internet, voice recorder, note, and calculator. And another notable factor is the design of the app icons and ample space among them creates a neat looking menu page. 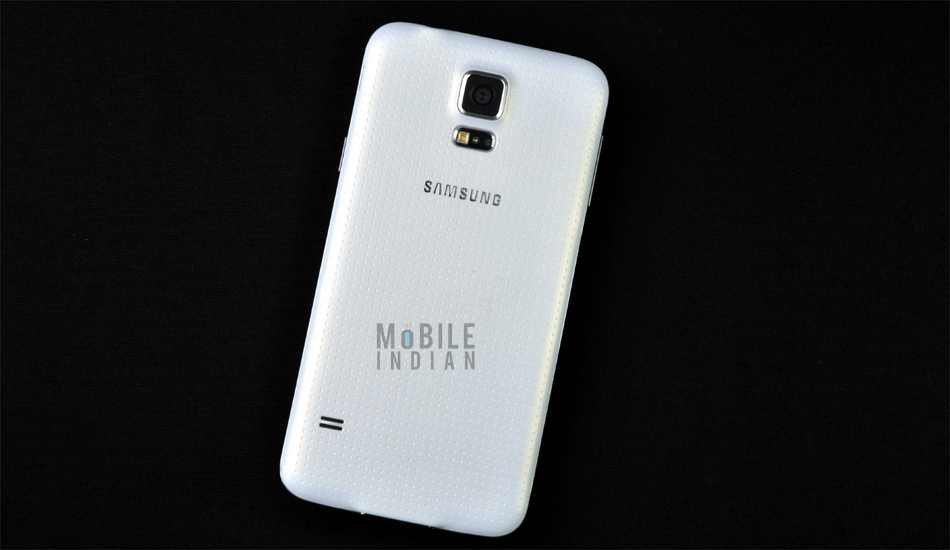 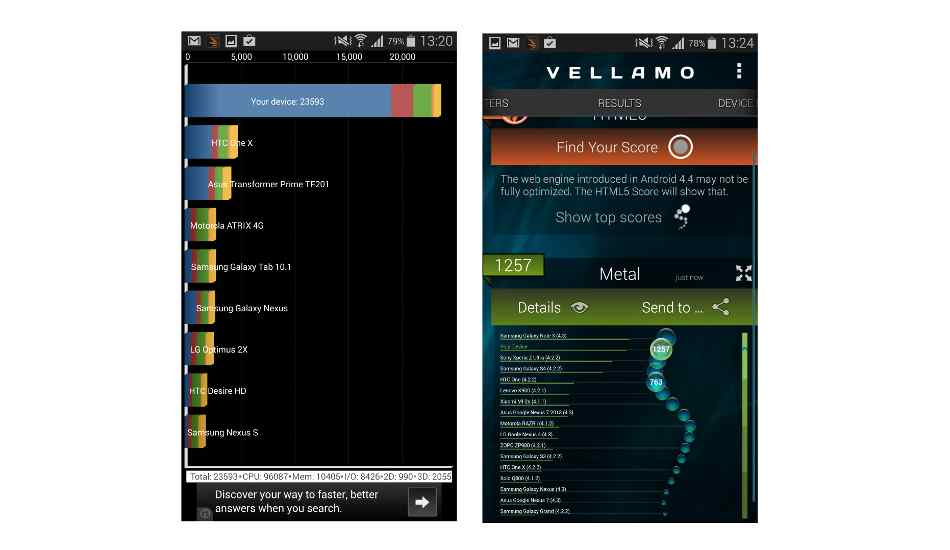 The result of this combination is anybody’s guess. It broke all the records of Antutu benchmark scoring a whopping 39252. Similarly, in all benchmarks the Galaxy S5 came at the top. No doubt, we encounter no issues while playing games or multi-tasking on the Galaxy S5.

The Samsung Galaxy S5 comes with a 16 megapixel rear camera with 1.26 inch sensor. In the front, it has a 2 megapixel camera with wide angle lens. The front camera can also capture full HD videos. 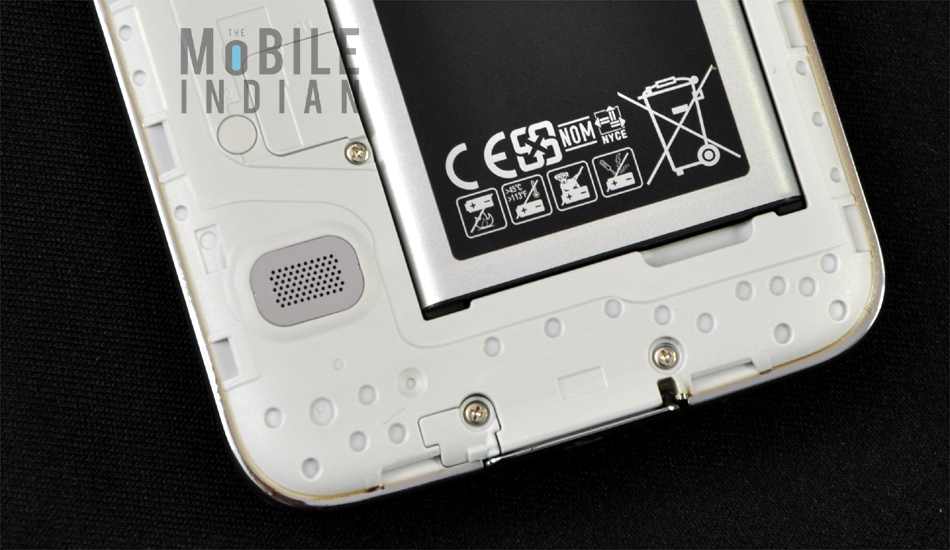 The S5 has several camera features that would lure you. First of all, it comes with auto HDR feature. Selective focus enables users to make a certain object stand out from the background. While using the rear camera, you can reduce the resolution from 2.4 megapixel to 16 megapixel. Besides, there are various modes like Auto, Beauty Face, Panorama, Virtual Tour, etc. you can download more such modes from Samsung app store. 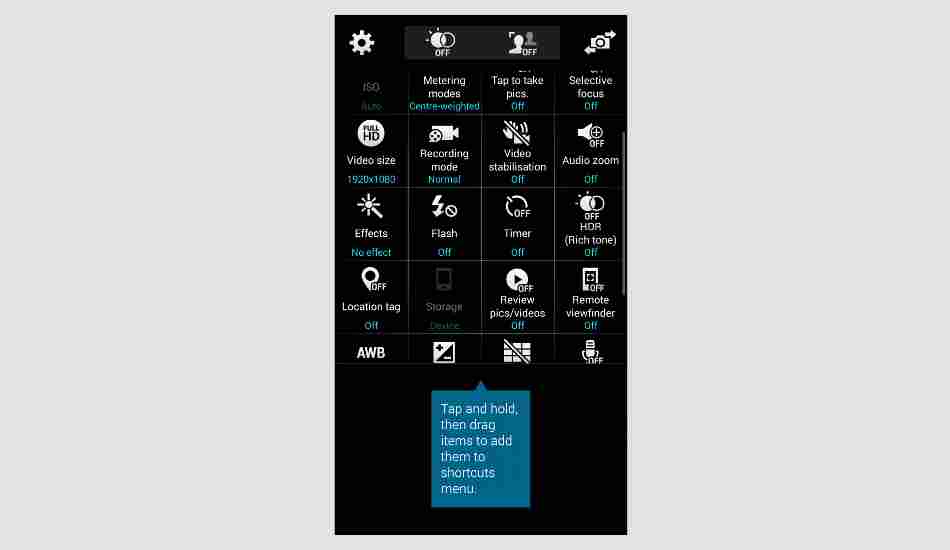 We have captured several images using both the front and rear camera. The camera app is quite fast. It manages to focus on the objects at about the claimed 0.3 seconds. The LED flash light does a great job providing a smooth light all over the object but without flash, the camera is helpless and captures very grainy images.

You can check out the samples here

The Samsung Galaxy S5 comes with a 2800 mAh battery. As I said earlier, it comes with a USB 3.0 charger. You can use the normal USB 2.0 charger with it as well but ofcourse it will take a little bit longer to get charged. 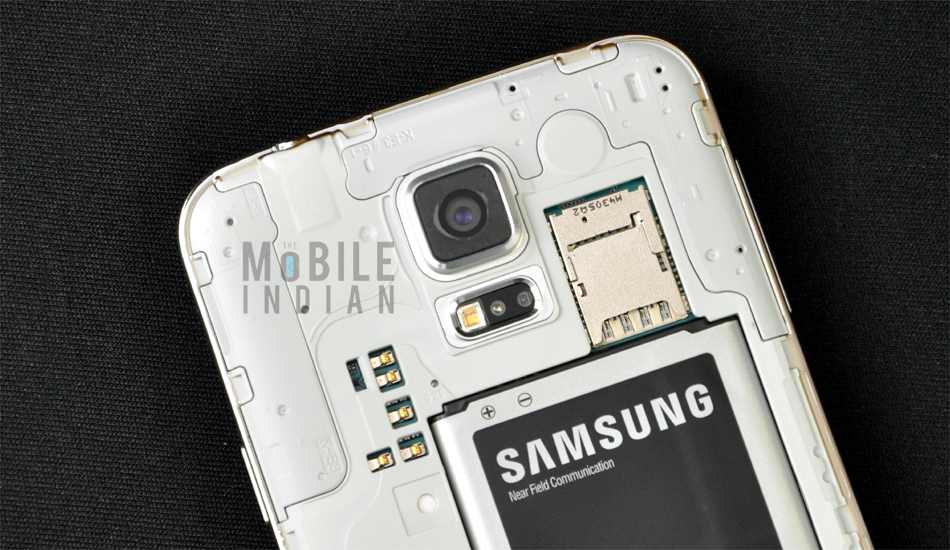 Once charged, the battery though manages to run for days together. A light user would not have to charge the phone for more than 36 hours while a heavy user would certainly get 12 hours comfortably which means using WiFi throughout the day apart from an hour of gaming, calling, and web browsing.

To give you some perspective, in one instance we used it to watch videos on YouTube for half an hour with quarter brightness and it lost only seven percent charge. In similar circumstances, it lost about 10 per cent charge during gaming. 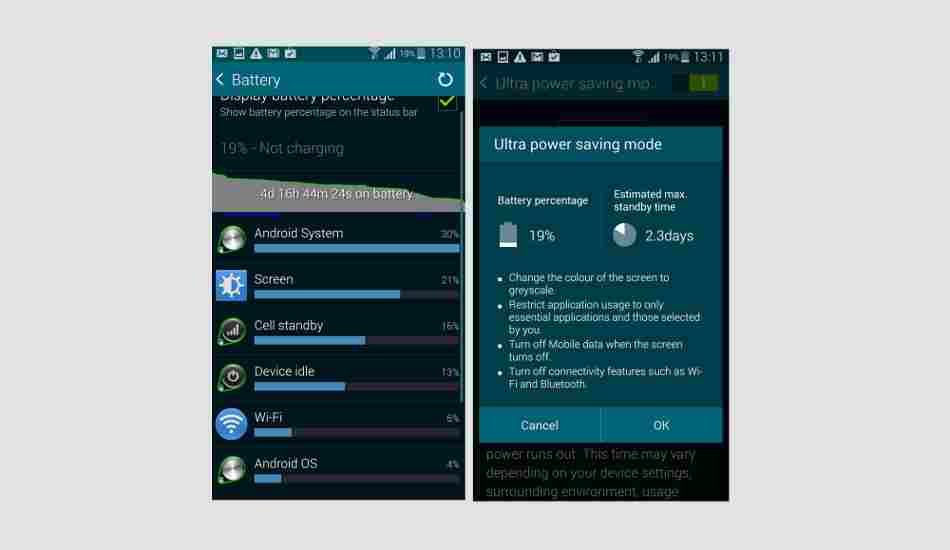 The Galaxy S5 comes with two power savings option – Normal and Ultra. The Normal power saving mode too has the ability to turn your smartphone into black and white and restrict data and CPU performance. Ultra power saving mode brings a more simplified greyscale theme to further enhance the battery back up.

However, there is no way to automatise these features at this point of time.

As of now, only the 16 GB internal storage based Galaxy S5 is available. Of the 16 GB, about 5 GB is used by the system while the rest is available for the users. There is a micro SD card slot in the phone as well which can accommodate a card of up to 128 GB capacity. 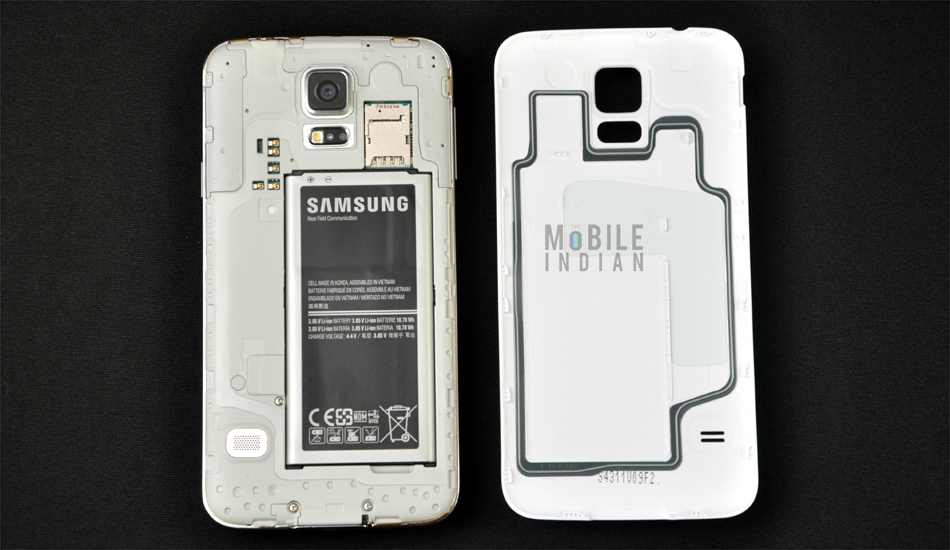 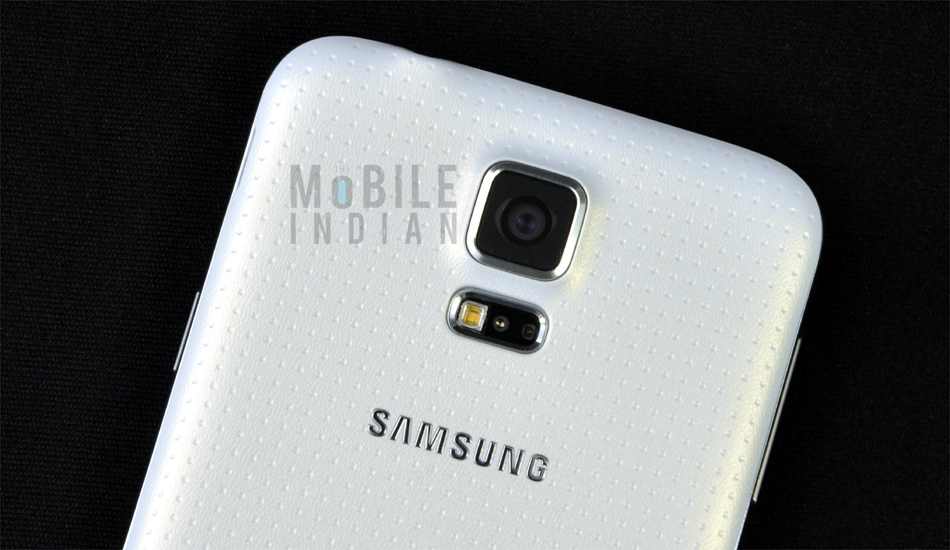 The Galaxy S5 comes with a lone SIM slot which would be quite disappointing for many. But otherwise it is quite well armed when it comes to connectivity. It has WiFi (a/b/g/n/c), NFC, Bluetooth 4.0, IrLED, and a USB 3.0. Strangely, though it has USB 3.0 port, the phone comes with an universal USB 2.0 cable. You thus have to purchase a USB 3.0 cable separately.

At Rs 51,000, the Samsung Galaxy S5 isn't the costliest handset around but it is definitely the fastest. I won't call it the best camera phone in the market but it is one of the best in terms of battery, storage, and connectivity. Samsung has also worked really hard in creating a very intuitive interface that is easy as well as comfortable to use. I won't though go overboard with its heart rate monitor. Ofcourse it is useful but it is not a deal maker. The only issue (if not the drawback) with Galaxy S5 is perhaps its plastic body. Be it Apple, or HTC, or Sony, all have tried and created much better looking handsets. Sony even has several water proof and dust proof smartphone in its arsenal. Having said that I must here mention that the Galaxy S5 is a tough handset and it does not look cheap by any mean. If you are not bothered by its plastic body and want a superfast smartphone, then the Samsung Galaxy S5 is an ideal choice.