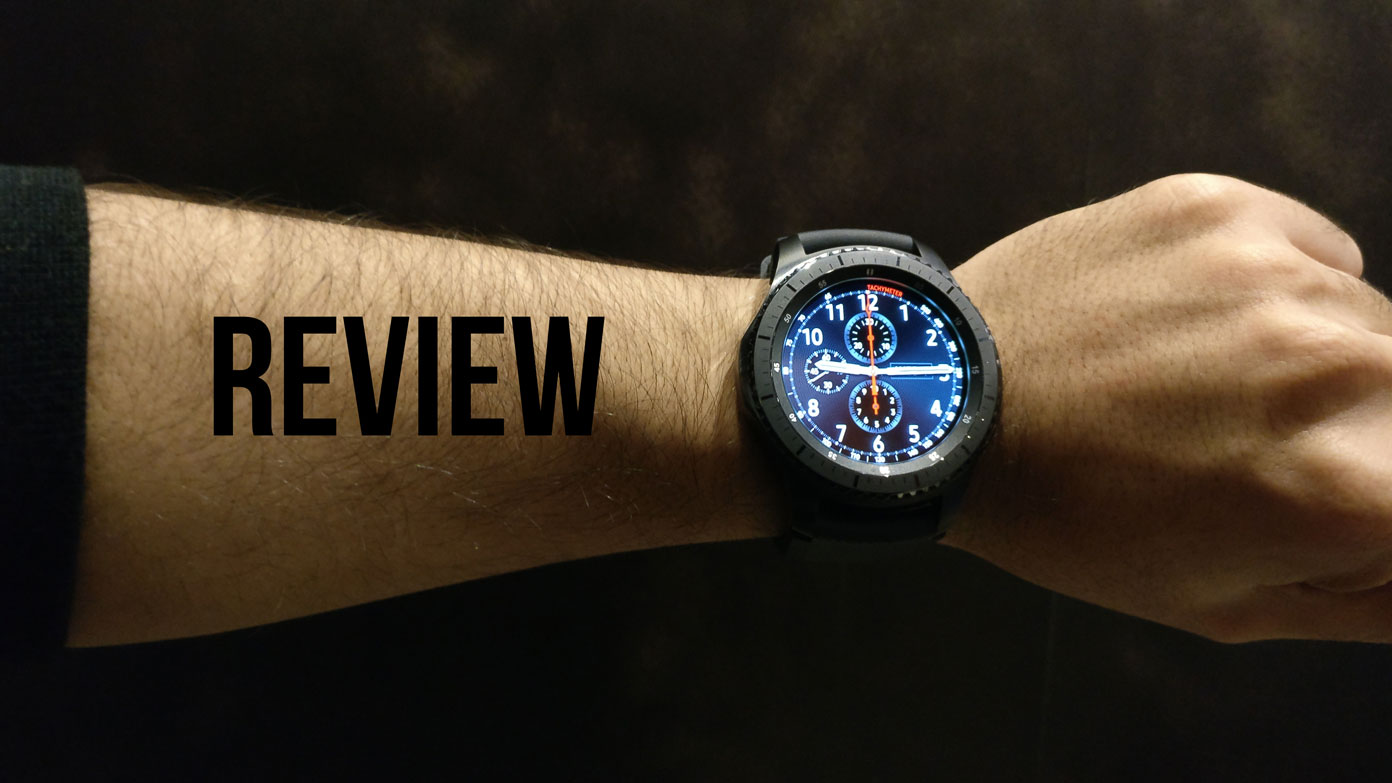 Global numbers already indicate a possible demise of this interesting piece of hardware in future, however, do we really have smartwatches that are actually worth for money and deliver when needed?

2016 was not a great year for smartwatches, however, some of them still managed to dig out a decent amount of sales. Last year, Samsung launched its third-generation smartwatch, the Gear S3 which eventually landed in India earlier this month. The Gear S3 comes in two variants, Frontier and Classic, both of which are priced at Rs 28,500. Manufacturers these days put in all they can inside a wrist watch, yet, often the gamble never pays off. While smartwatches do exists in the west, in a country like India, people are far off from using a smartwatch for minor day-to-day tasks. Global numbers already indicate a possible demise of this interesting piece of hardware in future, however, do we really have smartwatches that are actually worth for money and deliver when needed? I had the chance of using Samsung’s Galaxy Gear S3 Frontier for over two weeks and here are my thoughts.

Design and Display
While the ‘Classic’ variant is for every occasion, the Frontier variant comes with a sturdy look. We get a rubberized band material along with a dial made out of Stainless Steel 316L which feels extremely premium on the wrist. In other words, you will be amazed by the fact that how similar, to a regular watch, the Gear S3 feels on the wrist. The straps can be swapped with any 22mm strap of your choice. The Frontier variant also comes with the rotating bezel which probably makes this watch a lot more convenient to use than the normal touch screen. The rotating bezel can now do a lot of tasks apart from just navigating through menus.The watch weighs 63 grams and is pretty comfortable on hands, though the dial on the Frontier might be a little too big for some. For the dimensions, the smartwatch measures 49 x 46 x 12.9 mm. We get two buttons, Back and Home on the right side of the dial which are tactile and also texturized to complement the overall solid look of the Gear S3. The Heart Rate monitor is at the back of the dial and the smartwatch also comes with Accelerometer, Gyroscope and a Barometer. The smartwatch is also IP68 Dust and Water resistant and can be submerged up to 1.5 meters of water for not more than 30 minutes. While little splashes are fine, this smartwatch is not your swimming companion. With the Gear S3, Samsung has hit all the good points in terms of design apart from a slightly bigger overall size of the device. I have no complaints about both the size and design language but I suspect that might not be the case for everyone. 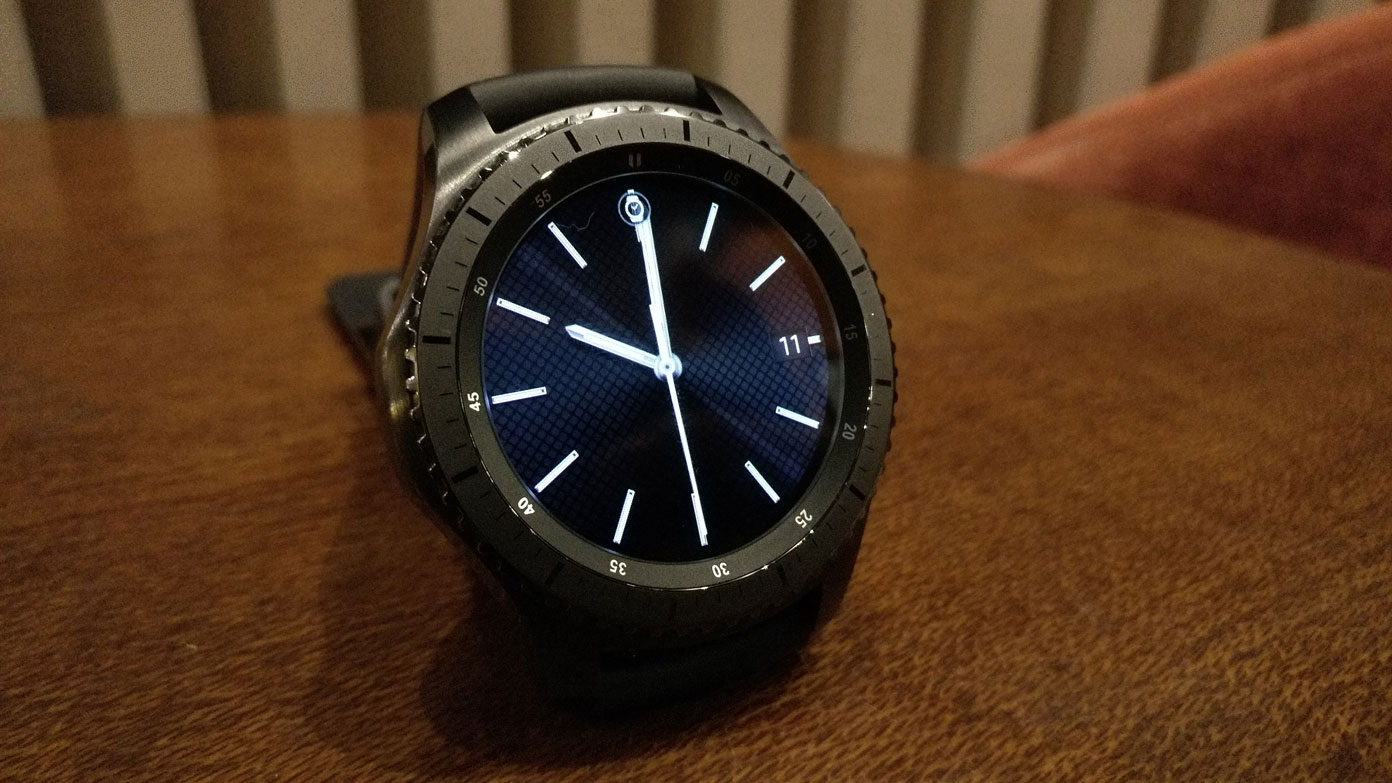 Inside the box, we also get an additional small strap for those with thin wrists along with a wireless charger and some device literature.

The display on the Gear S3 is 1.3-inches with 360 x 360-pixel resolution and a Super AMOLED Panel. The display is probably the USP of the Gear S3. Apart from the ‘Always On Display’ option, the display does get fairly bright and the watch also manages to control the brightness according to the environment. Being a Super AMOLED panel, one can also save up on the battery by putting up a black watch face and background throughout the user interface. Further, the Always On Display on the Gear S3 can throw out all the 16 million colour options and display information in real time. On the negative side, the display takes on a lot of smudges and you often wish to operate the watch just with the physical buttons and that rotating bezel.

Performance and Software
Well, smartwatches are not meant to beasts but are expected to do the job taking a lot less time when compared to your smartphone. The main purpose of a smartwatch is generally to save up on time on some select daily tasks which you are otherwise used to do on your smartphone. Listing out the specs, the Gear S3 comes with a 1 GHz Exynos 7270 Dual-Core processor paired with 768MB RAM and 4GB internal memory. On top, the Gear S3 runs on Tizen based wearable platform 2.3.2. During the time I tested the device, I never witnessed any lags or hiccups and the smartwatch was smooth as butter all across the interface. The sensors on the Gear S3 also performed as they should and often put out really accurate numbers. Apart from being a smartwatch, the Gear S3 is also your true fitness partner. The device can track your movements and often warns you when you are seated for a longer period of times. It counts your steps and literally shows them in real time. Further, I liked the fact that it keeps on reminding you to move or stretch whenever you are sitting idle for too long. 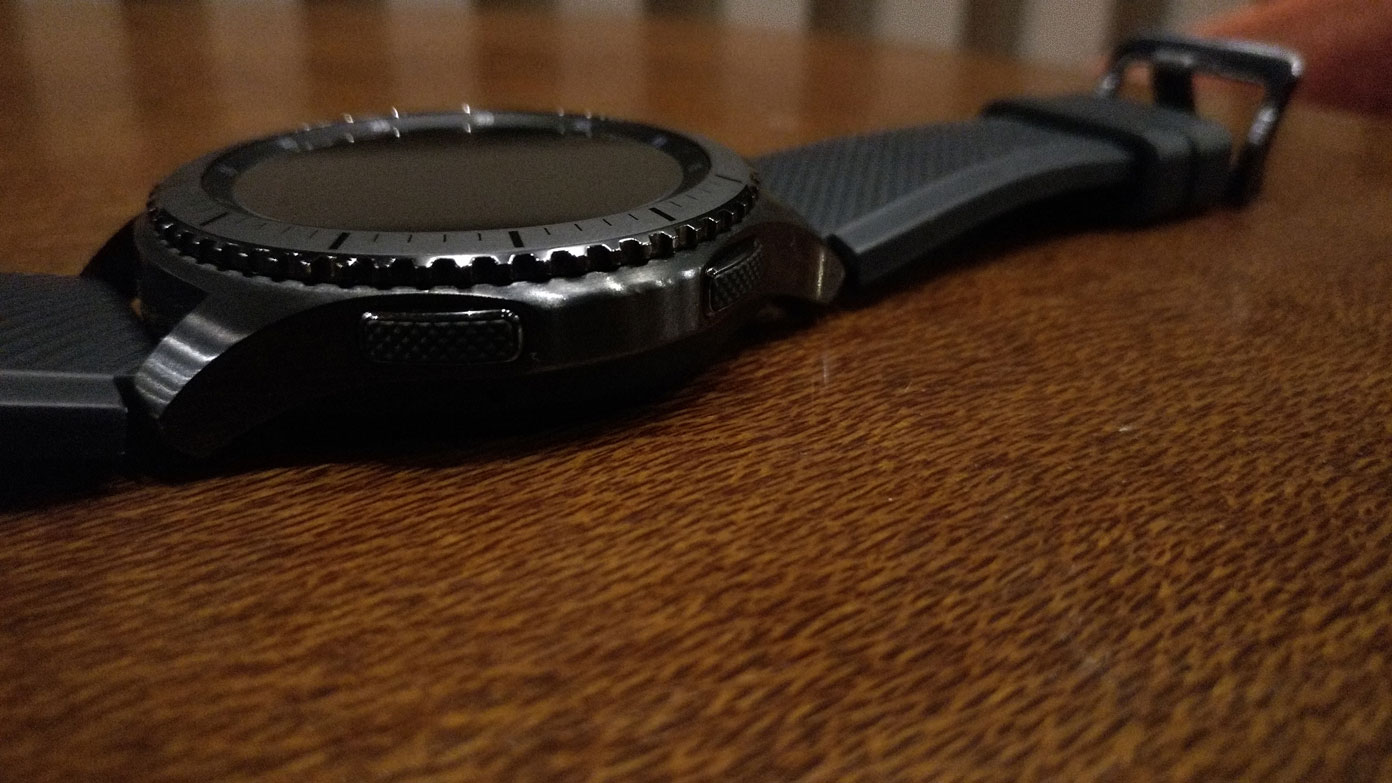 Connecting the device your smartphone is a cake walk by just installing the Samsung Gear app. Tizen OS 2.3.2 is not the best smartwatch OS but is really unique in its own sense. We get a bunch of pre-loaded watch faces while you can always explore new ones on the Gear Store. Pressing the ‘Home Button’ will bring back to your default watch face while pressing it again will open the settings. The apps are layers on the inner circumference of the dial and can be navigated by both the rotating bezel and touchscreen. You also get a ‘Recent Apps’ menu which gives an option to clear the background running apps. Samsung’s S Health is better than ever and can display all your daily performance targets and results with just a swipe away. Apart from the daily activities like walking, climbing floors etc, you can explore from a tonne of workout tracking options inside Samsung’s S Health app. In other words, if you are a fitness freak, the Gear S3 probably might be your best companion at the Gym. 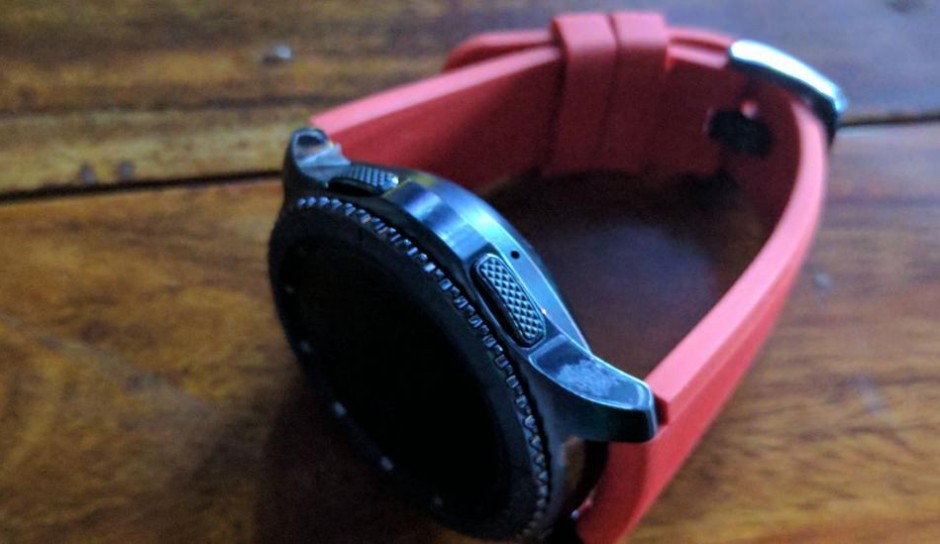 Keeping fitness aside, Tizen OS also lets you add widgets to the right of your watch face. Further, you can also control music from your smartwatch only after the app on which the music is being played on your smartphone is running. Competing with Google Assistant is Samsung’s S Voice which in my opinion, does a decent job of pushing information but is still not up with Google Assistant. You can perform tasks like, set an alarm, ask for weather, call your one of the contacts but will struggle if it needs to search it on the Internet.

Tizen OS also offers a fair degree of customizability, but it lacks when it comes to apps. There are just not enough apps on the Galaxy App store for Tizen OS which is probably one of the biggest cons of this smartwatch. For the customizations, we can set a dedicated function to ‘Double Tap to Home Button’ and the smartwatch also comes with ‘Wake Up Gesture’ option which when turned on, makes the display on the Gear S3 automatically turn on when you raise your hand to see the time. This is only valid when you have kept the ‘Always On Display’ mode off. All in all, Samsung’s Tizen OS comes with tonnes of features but has to worry about the latest Android Wear 2.0 which was just launched last week. Pressing the Home Button thrice will activate the SOS feature and send an alert to all the selected contacts immediately.

Battery and Connectivity
The Gear S3 ‘Frontier’ is quite thick which is because it packs in a 380 mAh battery inside. Starting the day at 7 AM in the morning, the watch easily lasted my easy 2 – 2.5 days while connected to my smartphone. My general usage would include short periods of browsing, notification access, a couple of calls, an hour long workout. With the ‘Always on Display’ turned on, the Gear S3 died a little early than the usual pattern but that is acceptable. Samsung has given in a wireless charger which takes about 2 hours to charge the smartwatch from 1% to 100%. 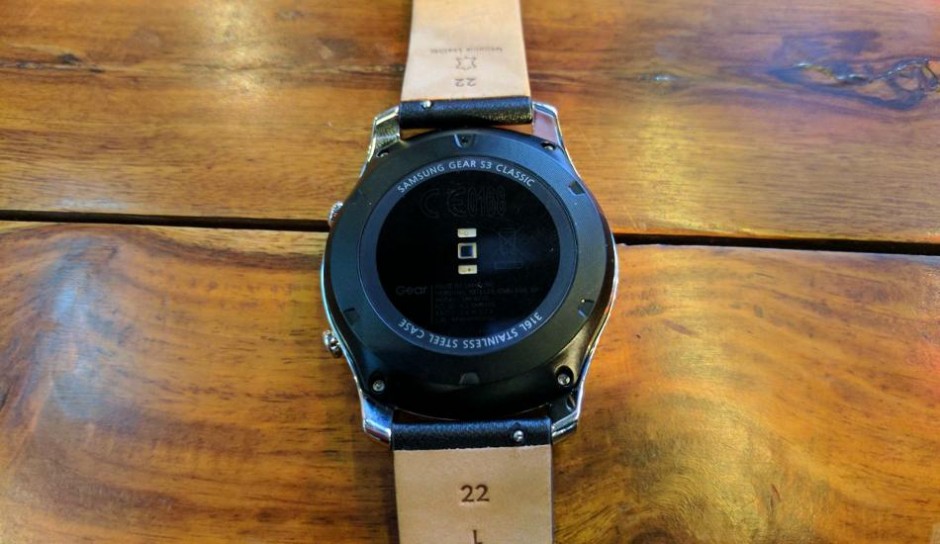 For the connectivity, the device features, built-in GPS, Bluetooth 4.2, NFC support and WiFi. Apart from that, the Frontier variant also comes with Samsung Pay and LTE connectivity but it depends on the region you live. Samsung Pay is yet to debut in India. The watch can make and take calls, however, you need to be in a peaceful environment to comfortably converse over the Gear S3. Taking this smartwatch outdoors for calling is not a good idea. However, you can always take the call from your smartphone after being alerted by the smartwatch. Apart from that, the smartwatch alerts you when it connects and disconnects with your smartphone.

Samsung Galaxy Gear S3 is an interesting piece of hardware overall and is yet another attempt of being the best in the town. However, for the price tag of Rs 28,500, the smartwatch is likely to find it hard to attract people. While the hardware on the Gear S3 shines, the lack of enough apps on Tizen OS makes it a tough choice for consumers. If you ask me, I would not buy the Gear S3 for that price and neither would I recommend it to anyone. The Gear S3, no doubt, is an amazing accessory for your device but surely not a necessity.