Here’s our review of the Samsung Galaxy Buds2 Pro, the latest flagship earbuds from Samsung with Bluetooth 5.3, Air vents and more. 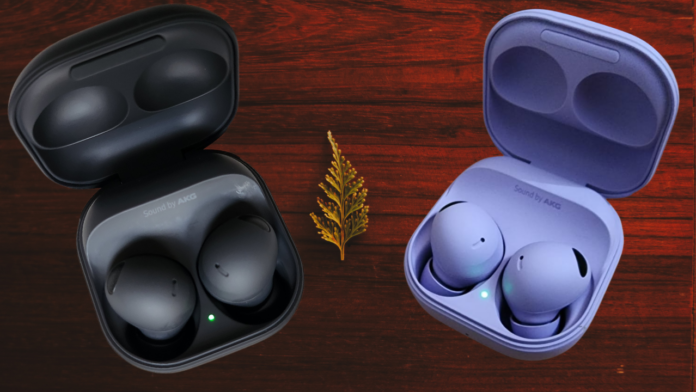 Samsung is pushing its presence in various other segments apart from foldable smartphones and one of them is TWS earbuds, The brand recently came up with its latest and greatest wireless earbuds called the Galaxy Buds 2 Pro, which are its most high-end TWS earbuds till date with all the bells and whistles packed in. While it has an MRP of Rs 17,999, the Buds2 Pro is currently selling for Rs 15,999 with a discount of up to Rs 4,600. Does that make it bang for the buck? Let’s find that out in our review of the Samsung Galaxy Buds2 Pro.

The design of the Galaxy Buds2 Pro had me impressed as soon as I took it out of the box. The case of the TWS earbuds is super pocketable, while the buds themselves are smaller in size compared to their predecessor. However, the only complaint I have with the design is the matte finish on the black colour variant.

There’s no doubt it looks good and feels the same as well, but then the case is very much prone to scratches at the same time. There’s very little chance you’ll be taking it out of your pocket without a single scratch if you keep it with something else in there. Apart from that, everything looks and feels fine. Interestingly, the Purple colour variant is less prone to scratches or we can say they are less visible.The case lid has a spring mechanism that keeps it open when you go past the 70-degree angle.

Then there’s a small LED light at the front of the case showing you the battery status of the case, while the LED light inside the case shows the same for the buds. Green means good to go while orange and red indicate decreased battery life. Next, the buds sit comfortably inside the small-sized case.

But, the magnets could have been stronger to keep them in place when you put them in the case because, at times, the buds are slightly out of position, due to which the charging doesn’t begin. In addition, the Buds are IPX7 rated for water resistance. Lastly, the USB-C port at the back can help you charge the case. The case also supports wireless charging, so you can just keep it on a wireless charging pad to fill it up.

As for comfort, Samsung says it has made the buds smaller for the comfort factor. In our opinion, this has definitely worked out well for the company. The Galaxy Buds2 Pro are very comfy inside the ear and has a snug fit. They won’t easily fall out of your ear during your running or workout sessions. Infact, during my use, I never felt I was wearing anything, and that’s a good sign.

Moreover, ear tips of different sizes are also provided inside the box so you can use the one that fits you well. But because they are so small, taking them out of the ear can be a task at times, depending on your ear shape. All in all, I loved wearing the Galaxy Buds2 Pro during my walk sessions and even when I was indoors.

The earbuds feature Active Noise Cancellation (ANC) and are equipped with three high signal-to-noise ratio microphones. The Galaxy Buds2 Pro connects wirelessly via Bluetooth v5.3. Talking about connectivity, I didn’t face any issues, and there were no connection drops or anything of that sort.

As for audio quality, the Buds2 Pro shines with its balanced sound stage, where the treble is as clear as the bass when it hits. The mid-range where the vocals lie is very clear, while the high-range is handled well by the TWS buds. Even the farthest of the musical instrument in the song was clearly heard.

As for the bass, there’s this punch with every beat you can feel. Compared to the Nothing Ear (1), which I was using earlier that had a very strong bass effect, the Buds2 Pro is slightly less intense in that area.

However, the punch with every beat is something I missed in the ear (1) and now that when I compare them side by side, I can feel how the bass overpowered other ranges in the ear (1) with my equalizer settings while Buds2 Pro’s bass was more of a clear hit with vibration.

I would also like to mention the support for SSC Bluetooth codec with supported Galaxy devices that further enhance this audio quality. As I was testing the Buds2 Pro with a Galaxy Z Flip4, I was able to make use of the Samsung Seamless Codec, which did show a difference in clarity when compared to SBC and AAC codecs.

However, those with a non-Samsung smartphone won’t be able to take advantage of the SSC codec because it is limited to Samsung devices. Apart from that, the 24-bit Hi-Fi audio is something which most people won’t be able to experience just because apps like Spotify and YouTube do not support it. But, one can experience it using the appropriate music files and an app that can support playback of such audio files.

As for ANC, Samsung says that the ANC is 40% better than Buds Pro and cancels noise up to 33dB. The ANC on the Buds2 Pro is another one of its strongest features that I loved using. In comparison to the Nothing ear (1), which I felt had a slightly stronger ANC, the feature was more realistic on the Buds2 Pro.

While on the road, I could hear cars, horns and if a loud vehicle went by my side, but even those types of sounds were lowered to quite an extent. A bunch of other sounds, such as my own footsteps, get cancelled out easily, and there’s no disturbance while you are playing your music. Because of those vents that are present to increase comfort, you’ll hear some amount of what’s going on around you when there’s no audio playing.

The ambient mode also works very well, where it amplifies the outside noise so you can hear your surroundings better. The ambient mode performance is optimum without any problems.

For call quality, the Buds2 Pro nails it once again in this aspect. Thanks to the three-mic system, the buds pick up your voice very clearly while cancelling out most of the background noise. Even when I was on a busy road, the person on the other end didn’t complain of background noise and couldn’t figure out if I was using my phone or buds.

Because it’s the most high-end TWS from Samsung, the Galaxy Buds2 Pro comes filled with features, some of which you cannot even imagine your buds could do. Once you pair your buds with the Galaxy Wearable app, one of such features that can be accessed is neck stretch reminders. This feature helps the buds identify your position and maintain a good posture for your neck by reminding you’ve bent your head downwards for 10 minutes.

Then there’s in-ear detection for calls, so the device plays calls through your earbuds automatically when they are connected. Then there’s a new earbud fit test which can show you if you are having a perfect fit or not, for the best sound and ANC experience. Furthermore, there are a bunch of additional features such as read notifications aloud, seamless earbud connection, Bixby Voice wakeup and more. Not all of these features work if you are using a non-Samsung device, meaning you are being walled into the Samsung ecosystem to make the best out of the earbuds.

Some of the more interesting features are in the lab’s section, where you can enable/disable gaming mode and volume controls. The gaming mode does show a minor difference in terms of latency, and the volume controls are a bit finicky. While it’s very difficult to trigger those in a single try – probably because of which they are put in the lab’s section in the first place – the feature being present at least is what I appreciate.

I even found a workaround to make them work 90% of the time, where instead of tapping on the edge of the earbud, tap on your ear itself that’s covering the edge with a bit of force. This actually triggers the volume increase or decrease function from the right and left earbuds, respectively. Additionally, there’s a Find My Earbuds feature as well that can play a loud tone via the earbuds and not via the case, such as the AirPods Pro 2, which have a speaker built into the case.

Then there’s the voice detect feature where if you start talking to someone and the earbud picks up your voice, it switches to ambient mode automatically and lowers the volume of your music as well. This feature worked very accurately during my testing. One of the features I enjoy using the most is 360 audio with head tracking enabled. It really immerses you in the listening experience, especially when you are watching a movie, and again, it works very well without any issues.

Next, you get a bunch of touch controls such as tap, double tap, triple tap, and touch & hold. However, they get applied for both earbuds, and I would have appreciated it more if Samsung gave controls for individual buds. Moreover, you can only customize the touch & hold gesture to your liking and none other. As for their working, the controls are very sensitive and have a great response time. At times, the high sensitivity interferes when I unintentionally take the buds out of my ear or put them back, triggering play/pause functions or switching to noise cancelling or ambient modes.

Lastly, Samsung also gives you equaliser support, but it isn’t as useful as you’d expect it to be. This is because you cannot customize it to your liking. There are several options to choose from, out of which Dynamic works best for me. You can change the settings of the equalizer that is built into your phone but baked-in support would have been better. We hope Samsung can change this with a future software update.

Speaking of how long the battery can last, the case packs a 515mAh battery, whereas both earbuds house a 61mAh battery. The Samsung Galaxy Buds2 Pro is claimed to last a total of up to 29 hours of listening time (ANC off) and up to 15 hours of talk time (ANC off) with the charging case. During our testing, the buds lasted anywhere between 4 to 5 hours on a single charge with ANC ON and high volume level.

With ANC Off, I could easily get more juice out of the buds, going past the 7 hour mark. If you are on a call for a long, the battery life drops. You can either charge the case wirelessly or with a USB-C cable. For the buds, a 5-minute quick charge inside the case should easily give you an hour of playback. The case should be able to charge the buds 2 to 3 times.