Samsung Galaxy A8 Review: A+ for performance and design 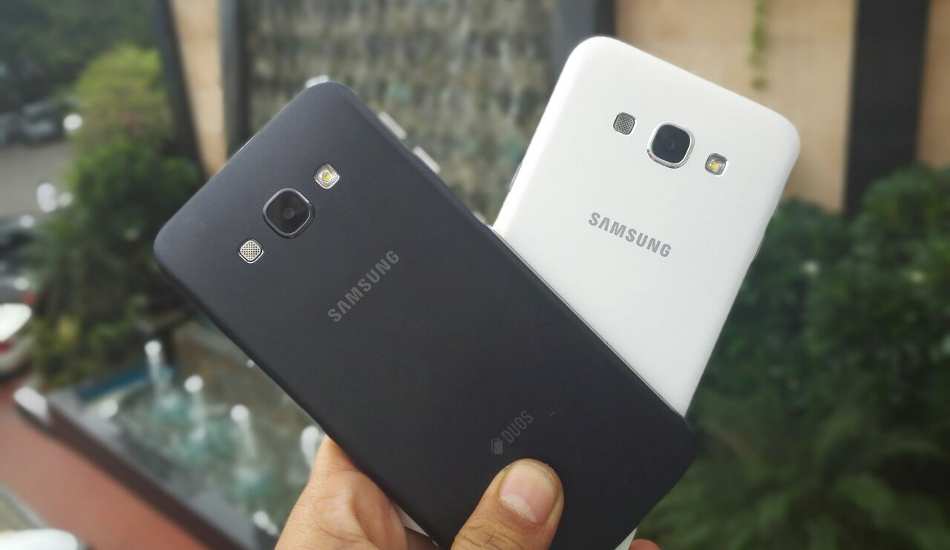 With 5.9 mm thickness Galaxy A8 is Samsung's slimmest smartphone till date. 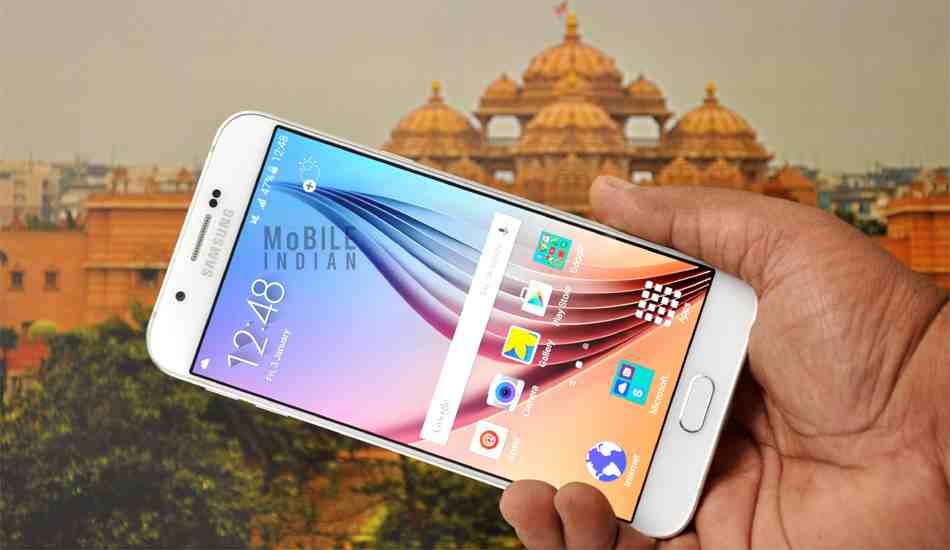 Samsung Galaxy A8 is powered by an Exynos 5 Octa Core (1.8GHz Quad Core + 1.3GHz Quad Core) processor which is coupled with 2GB RAM and the Android v5.1 (Lollipop) operating system. It has an internal memory of 32GB which can be further expanded to 128 GB via a micro SD card.

Samsung Galaxy A8 is loaded with 16 megapixel auto focus rear camera with optical image stabilisation, f/1.9 aperture, a wide-angle lens (120 degrees) and LED flash. It also has a 5-megapixel front camera which can be used to take wide selfies. It even has a fingerprint scanner which doubles up as a home button and can be used to lock/unlock the device. 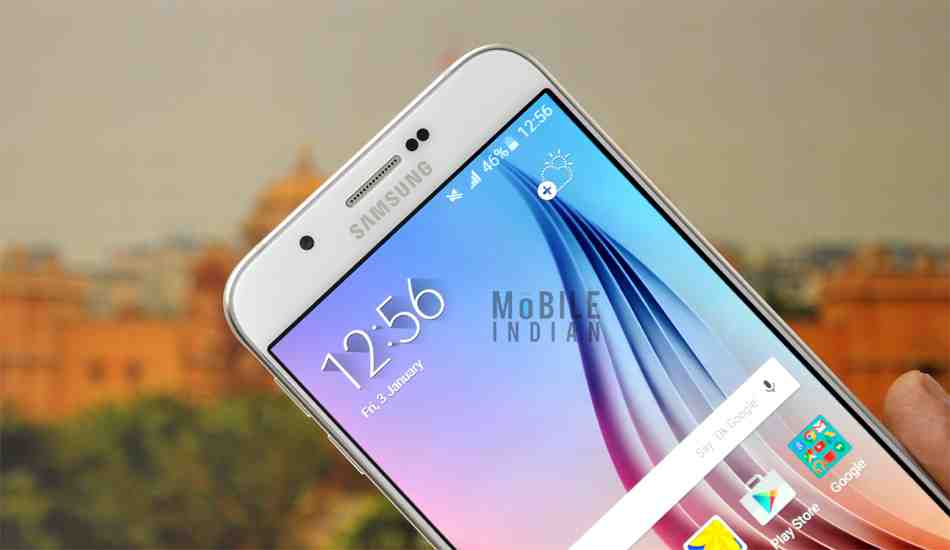 So, is it worth buying? Let’s find out.

Samsung Galaxy A8 has borrowed a couple of design elements from S6 and has worked on them to give A8 a different look. The design element which is common between S6 and A8 is the use of metal frame (brushed aluminum) and curved corner edges. The side panels are slightly chamfered which thus gives a comfortable grip. The traditional home button is there below the display with back and multi-tasking soft buttons on either side of it. Though it doesn’t have a unibody design but the transition from metallic frame to the plastic cover will give you that feeling. 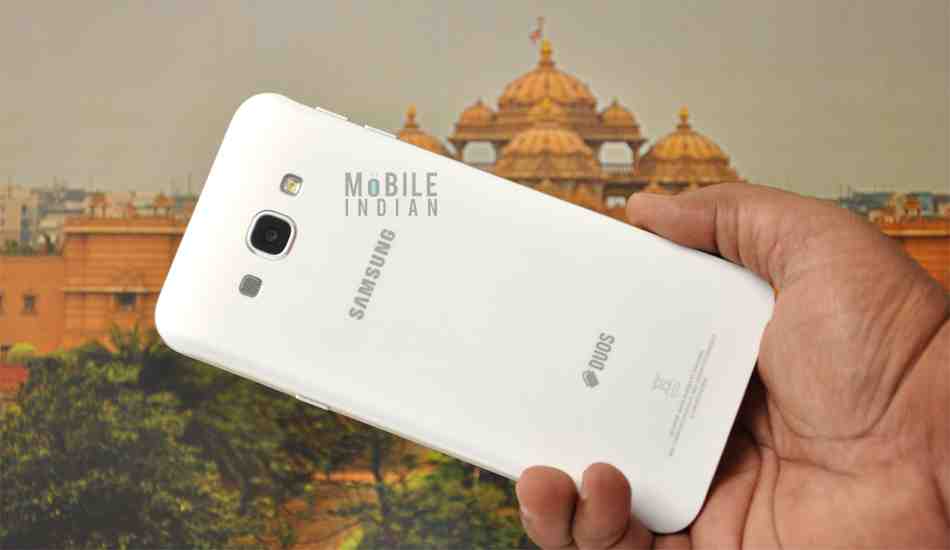 With 5.9 mm thickness, Galaxy A8 is Samsung’s slimmest smartphone till date but a couple of other smartphones from Gionee, Oppo and Micromax, are slimmer. As far as the placement of regular ports and buttons are concerned, SIM card slots and volume keys are on the left side, while power key is on the right. The USB and 3.5mm ports are at the bottom panel while on the top we have just a microphone.

The back panel of Samsung Galaxy A8 is made of good quality plastic which has a smooth finish with matte texture and is a non-removable one. It also holds camera which is flanked by a speaker and flash on either side. 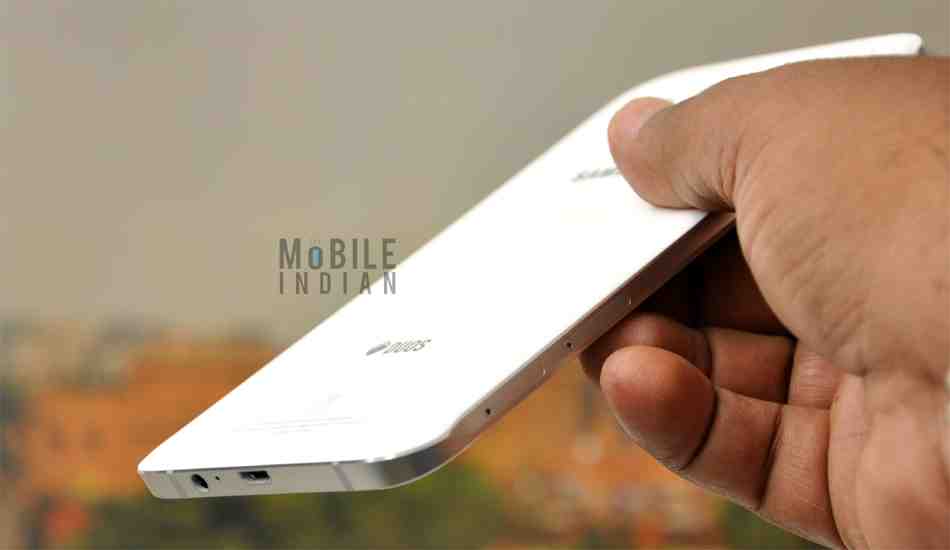 In a nut shell, Samsung Galaxy A8 despite having a 5.7 inch display is easy to hold and looks great. It is quite light, but people with small palms will have a problem operating it with in single hand. Also, placement of the speaker looks good but while holding the smartphone in the landscape mode most users may cover the speaker grill with their fingers and may need to do the adjustments so the sound is not obstructed.

Like all mid and high end smartphones of Samsung, the Galaxy A8 too has an amazing display. Its 5.7-inch full HD Super AMOLED screen is sharp and never misses out in detailing. The text and pictures on it are bright and readable even in bright sunlight. Its response to touch is also good. 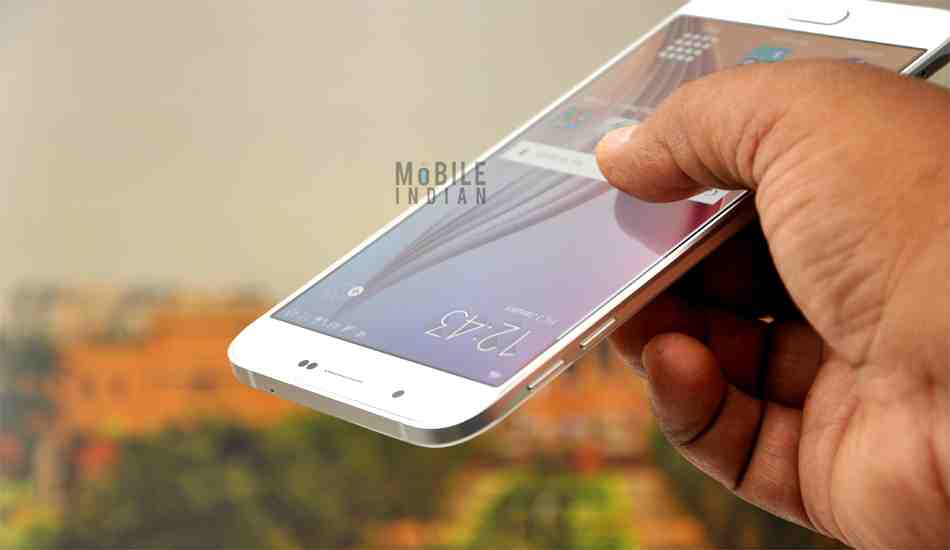 The Samsung Galaxy A8 runs on Android 5.1.1, with the company’s TouchWiz user interface layered on top. The UI looks clutter free and one can even change the themes in it. For a change, this time around Samsung has not overloaded the device with bloatware. The Galaxy A8 has just a few proprietary apps -Galaxy Apps marketplace, S Voice, S Planner and Smart Manager which help is giving a clean look to the phone.

The Samsung Galaxy A8 will delight you with it smooth performance and multitasking ability. Throw any task at it like gaming, surfing, or camera app it will give you an amazing performance. A8 does show signs of heating up on prolonged usage, but there is nothing alarming about it. The sound quality through the speakers, inspite of its small size, is pretty good.

In the last few months, I have used a couple of smartphones with fingerprint scanner and was not quite happy with them. Primarily, because of their uneven response. In A8, it is different. It has always delivered what it is supposed to do. 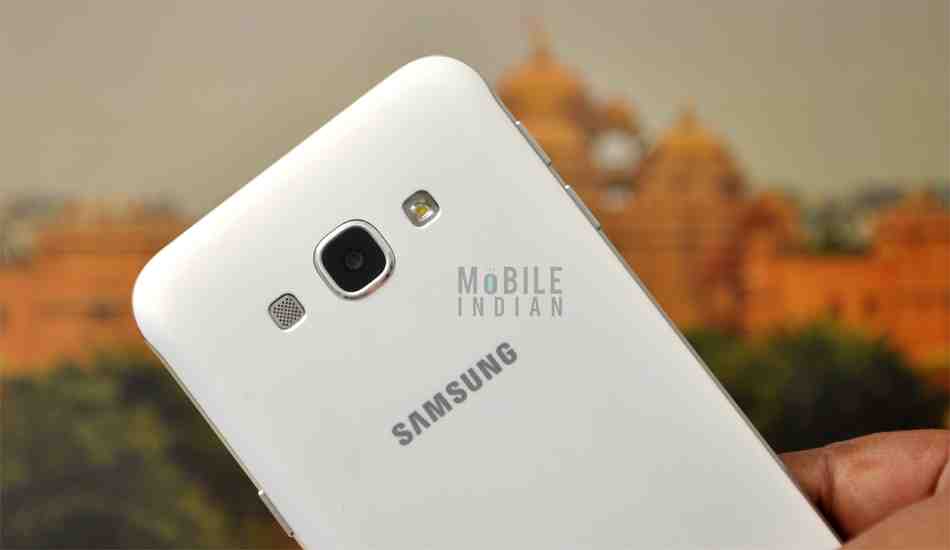 As far as the battery backup is concerned, if you are heavy user who keeps on checking the phone regularly and is hooked onto the social media you will get around 10 hours of backup in one single charge. This is quite decent. Also, if are running out of battery, ultra power saving mode will be quite handy in prolonging the battery by a couple of hours.

The rear camera of Galaxy A8 will not disappoint you with its sharpness, colour reproduction and detailing in well-lit condition. Even the shots taken in 100 per cent zoom are better than what you get in most of mid end phones. In dim light, output is not amazing but it is good. Another noteworthy quality of its camera is its quick auto focus feature and shutter speed so that one doesn’t miss out in capturing those exclusive moments.

As far as the front camera is concerned, it will not disappoint you either and group shot from the front camera come out quite well. One can even fire the camera app from the lock screen by just double tapping the home button in quick succession. 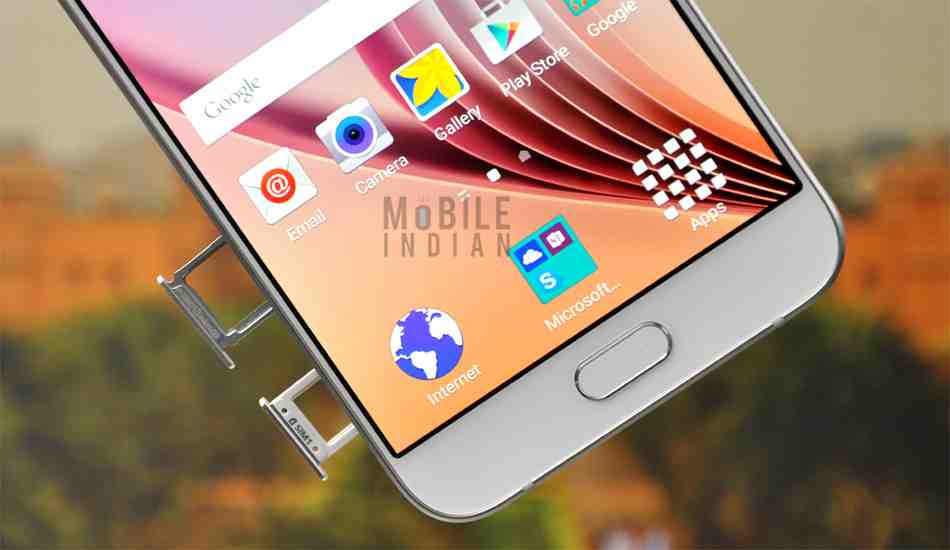 In the camera app by default you have four modes â€“ grayscale, posterize, negative, sepia and no effect. You can get more such modes like sports short from Smart Manager app for which you be needing a Samsung ID otherwise head to Google Play store for the same.

If we had done this review before the launch of Oneplus 2, which is priced at Rs 25,000, we would have straight away recommended Samsung Galaxy A8 as a good buy. But, inspite of great looks and performance it is facing a tough completion from OnePlus 2 in all the departments. 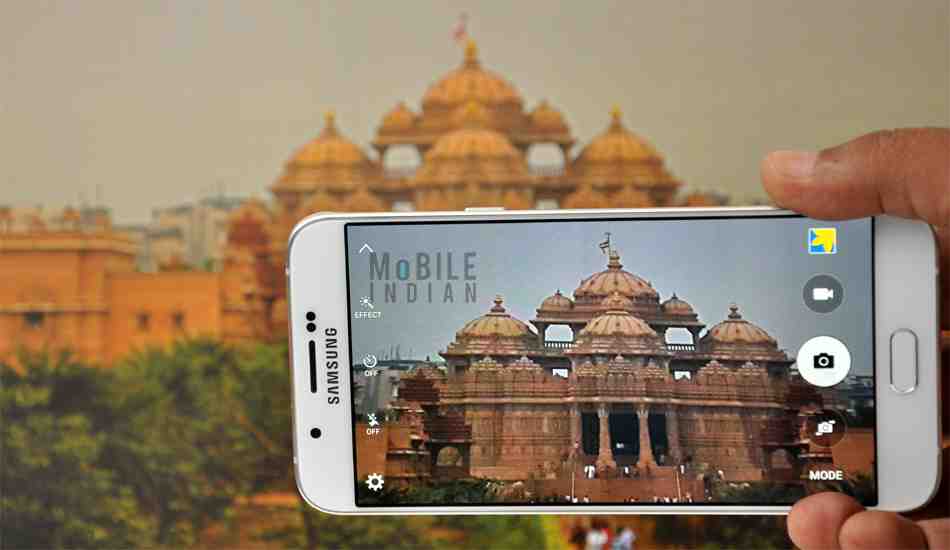 Having said that, A8 is a desirable smartphone, with great looks and amazing performance. It will not disappoint you. If you are not in a hurry to buy a new smartphone just wait for some time as we may see a price drop in A8 and when it happens press the buy button.

If we had done this review before the launch of Oneplus 2, which is priced at Rs 25,000, we would have straight away recommended Samsung Galaxy A8 as a good buy. But, inspite of great looks and performance it is facing a tough completion from OnePlus 2 in all the departments. Having said that, A8 is a desirable smartphone, with great looks and amazing performance. It will not disappoint you. If you are not in a hurry to buy a new smartphone just wait for some time as we may see a price drop in A8 and when it happens press the buy button.