Perfect for mobility, this 11.7 inch slate comes loaded with features but at a price.

The days of bulky laptops and tablet computers are certainly behind us now thanks to the tablet revolution that has taken place over the past couple of years. Starting with Android, then BlackBerry and iOS; now Windows 8 is the latest operating system to join the tablet wars. 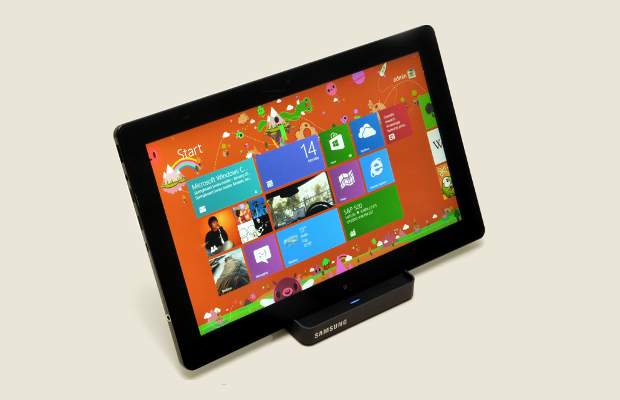 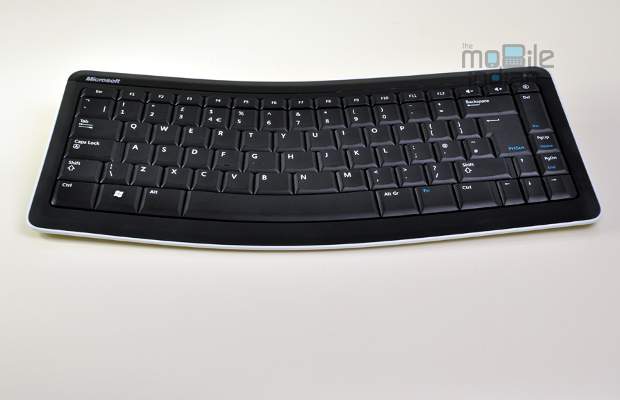 The Windows RT has enabled devices to get a lot of full-fledged PC like functionality, but at the same time has made them absolutely portable as well. The Samsung Slate PC, for instance, carries a lot of muscle when it comes to computing power, but ultimately it’s an 11.6 inch tablet that makes things portable and productive.

Out of the box the Samsung Slate PC XE700T1A looks like the mother of all tablets. And rightly so-the tablet is built around an 11.6 inch LED backlit LCD display, with a thick border around the display adding a few inches to the tab as well. The Slate PC comes only in black, which looks extremely good and gives the device a more professional look. 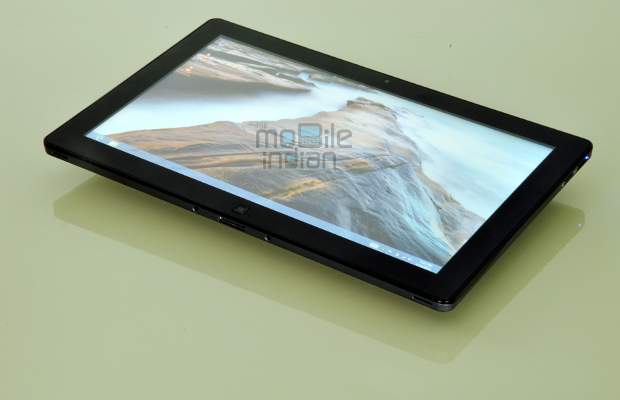 Weighing almost 900 grams, and without any physical keyboard the Samsung Slate is not too light, but in comparison with most notebooks and ultraportable devices it is lightweight and very functional. The tablet’s width of 11.6 inches puts the center of gravity further away from the hands, making it a bit cumbersome for long use. 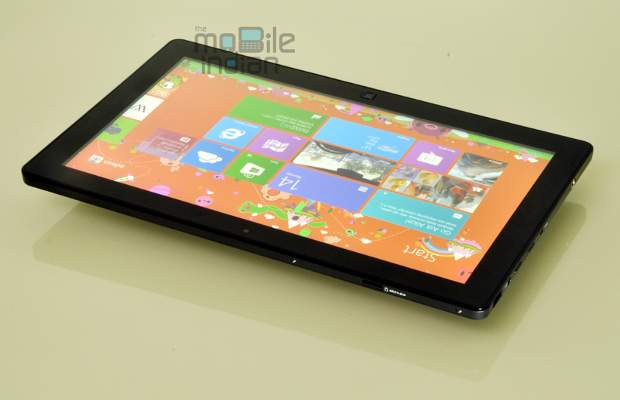 The Slate PC XE700T1A is directly aimed at users who wish for portability above anything else and the tablet manages that with ease. The big bold design of the tablet looks good and the flush front of its 11.6 inch display looks great as well. The back of the device features a brushed metal finish that gives it some protection from scratches and fingerprints but does not make it immune to scratches like any texturised back would have done.

Microsoft’s reference design seems to be working well, with a lot of manufacturers coming out with Windows 8 tablets, with similar designs except for a few advantages. 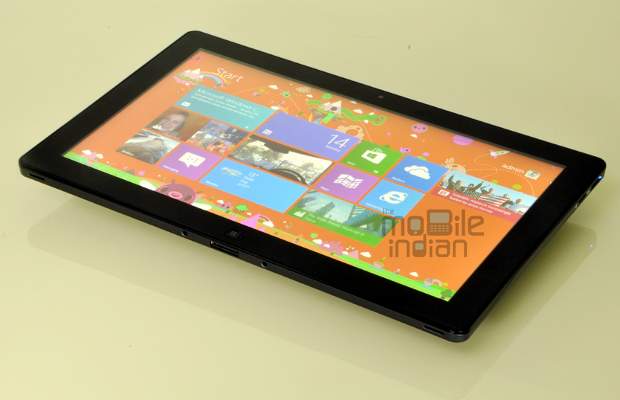 The front of the device houses the camera as well as the Windows or the home. The top of the device features a key that is accented by the new Windows 8 logo. The top features the micro SD card slot for memory expansion, while the only USB slot is placed on the left side of the device, along with the charging connector, HDMI port as well as volume rocker keys. 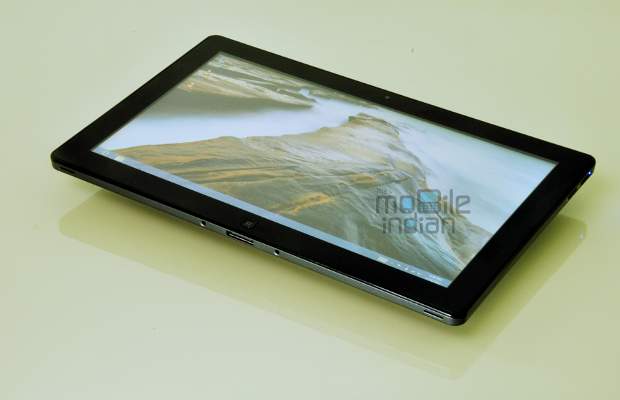 The right side of the device features the power key as well as the orientation lock key, which is a handy little inclusion as most of the times the tablet will be used in landscape mode only. At the bottom there is a docking port for connectivity with docks, which are available separately. 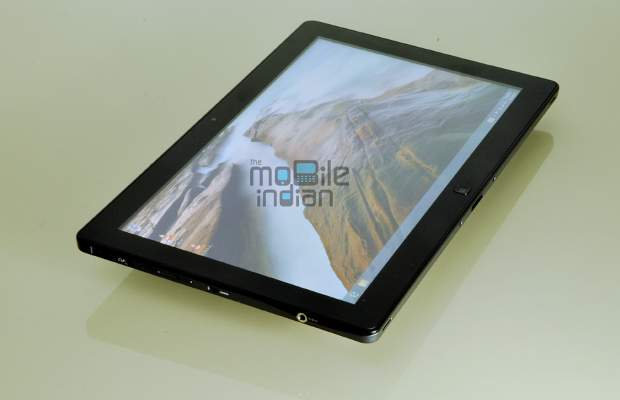 Although the build quality of the device is superb, due to its big size it is certainly prone to damage due to falls, a problem common in most big screen devices. The device has a scratch resistant surface on the display so there would not be any need to get an additional scratch guard installed to protect it further.

Slate PC is based on an 11.6 inch LED backlit LCD display. The use of LED backlighting makes the device energy efficient and displays brighter pictures with better contrast levels. The Samsung Slate XE700T1A utilizes a Pen hardware stylus like the one that comes with the Samsung Galaxy Note N8000, but it lacks on pressure sensitivity. 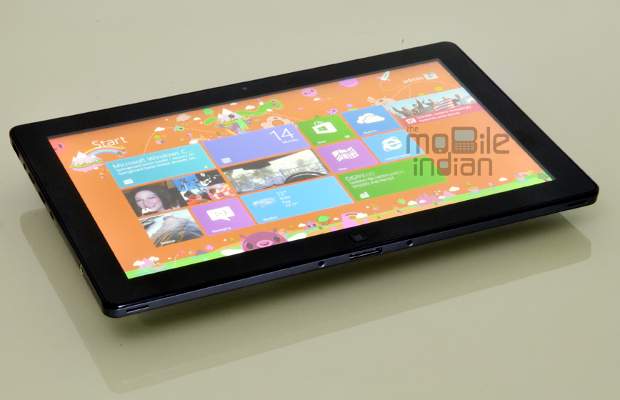 The display is an 11.6 inch one, which is rather unconventional for tablets but very useful at the same time as it enhances utility. The display features 1366 x 768 pixel resolution; while the pixel density is approximately around 150 pixels per square inch, which is lower but good for a bigger screen device. The lower pixel density, however, is nothing to worry about as the device runs all HD games brilliantly well. There is high level of clarity on the display and hardly any pixilation. In terms of color reproduction the display is quite vibrant. The brightness levels are quite appropriate and make the device legible in bright light too. 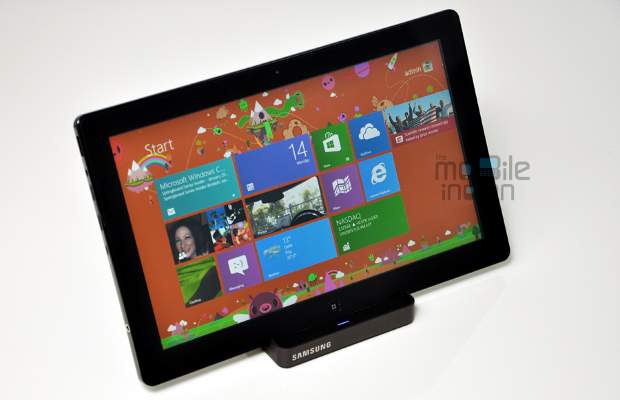 The device features multi point touch as a standard and the touch is quite responsive and accurate as well, which is especially useful for a tablet of this size. While playing games or browsing or even working on applications the touch complements every action by the user. And while utilizing the Pen stylus the whole game changes. The stylus is sensed by the device a couple of millimeters above the display itself.

The Samsung Slate utilizes an Intel i5 dual core processor running at 1.6 GHz. The processor is coupled with a massive 4 GB of RAM, which is good to have and it shows when applications load and perform quickly and without any lag. Multitasking is one thing that a user would love to do on the device. The processor and RAM come in real handy while utilizing its various features; and there is no lag while working on different or various applications simultaneously. Be it gaming or multitasking, all is done with great ease and without any hiccups or issues. 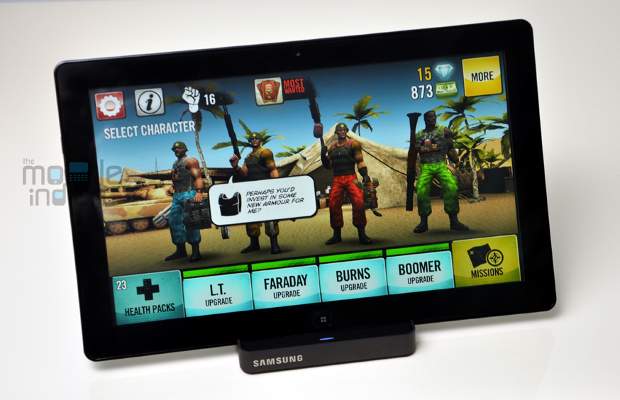 Windows 8 Pro operating system is the key behind everything that the tablet does. The new operating system has been tweaked for best touch performance as well as carrying its original mouse and keyboard functionality too. The touch based user interface offered by Windows 8 makes users forget the older iconic interface Windows has had till now. 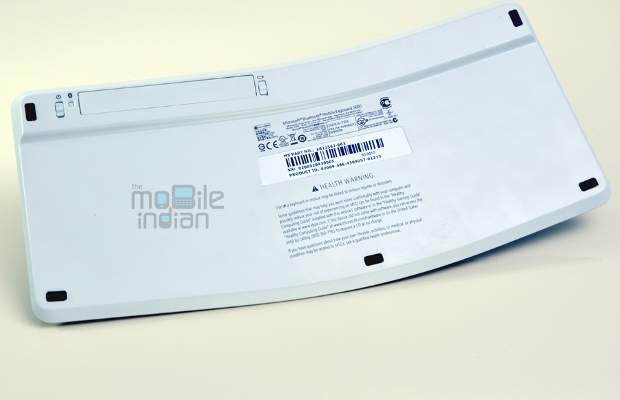 While multitasking is a breeze it would be a good idea to kill background applications at times, as when applications keep stacking up they eventually load the device and it shows signs of slowing, especially with HD games. Overall we are quite impressed with the performance and loved what the device could do. 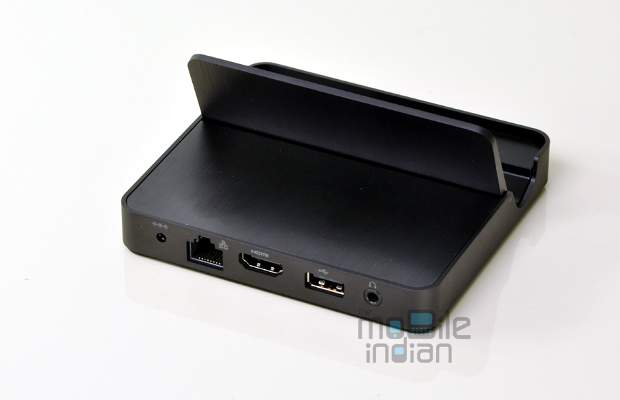 The Samsung Slate comes with a desktop dock and a Bluetooth keyboard, which tries to justify the price of this device to an extent and improves its utility multifold.

The device uses WiFi and Bluetooth for wireless connectivity but as it features a full sized USB port, connecting a USB 3G data dongle is easy, and with Windows operating system finding the right drivers is no issue. There is no cellular connectivity in the tablet otherwise, but with WiFi and USB connectivity for data dongles hardly anything is required. For wireless file transfers there is Bluetooth 3.0, which is speedy but requires an equally matched device to perform to its full potential. While using Bluetooth it is noticed however that the battery is drained faster than while using WiFi. Bluetooth is utilized for connectivity with devices such as mice and keyboards and it supports multiple device connectivity at a single time. 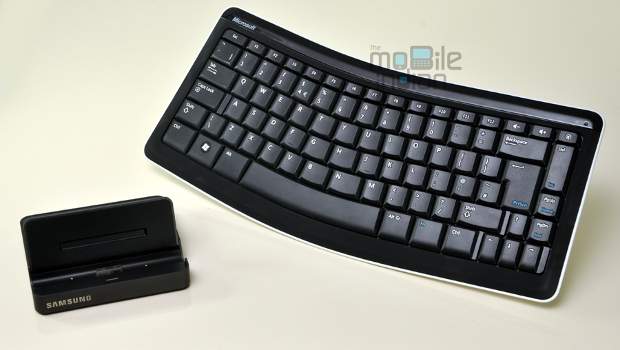 Along with all this there is the docking connector that can literally increase the number of USB ports to two, along with adding LAN network connectivity for the device as well. Also, the dock charges the device and can simply sit at the user’s office desk while the tablet goes absolutely portable. 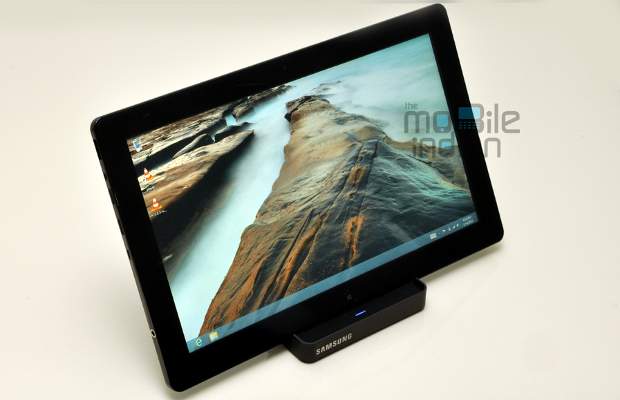 The device features 64 GB of internal storage memory, which can be used to store movies, apps, music, picture and documents; plus if you run out of space you can easily expand it up to 64 GB using SDHC cards. 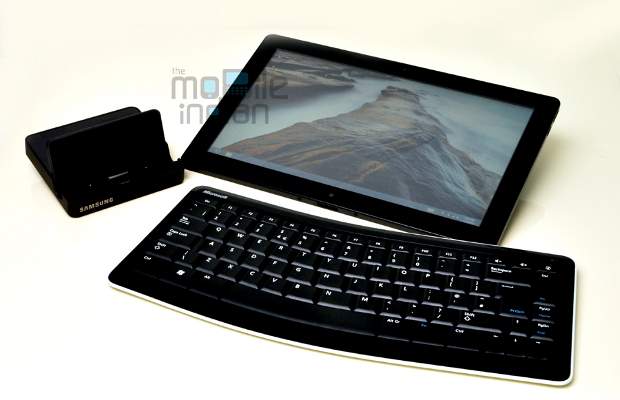 The device features a 3 megapixel camera with autofocus and HD video capabilities. In the front there is a 2 megapixel camera, again with HD video capabilities. The quality of the camera is good in bright to medium light while in low light it drops. Pictures taken are bright and sharp when the light is good; while at night or in low light the images turn rather grainy. 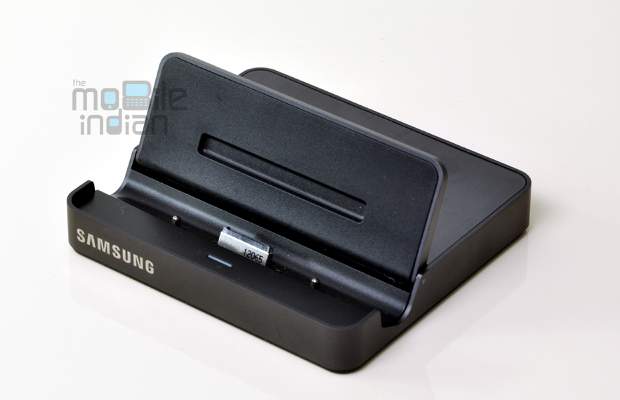 For sound the tablet features stereo speakers along with a subwoofer.

The device no doubt is big and heavy and a substantial chunk of the weight of this tablet is due to its bigger battery pack that powered this device for up to 5 hours of hardcore computing, or at least 1.5 days worth of productivity and multimedia. Playing videos occasionally is good, but if you are a movie buff you better keep the charger handy. 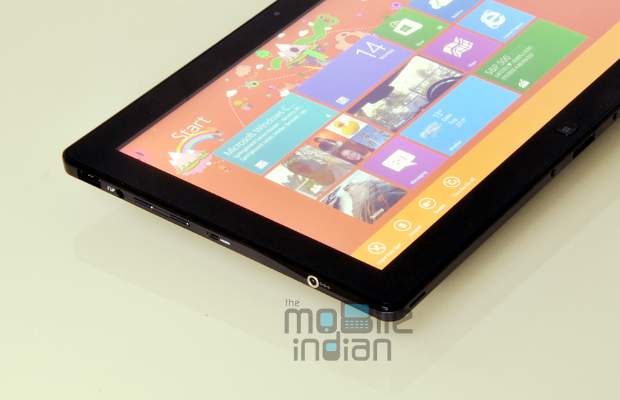 Overall, there are no complaints with the Samsung Slate XE700T1A, except for its price of $1,349 or approximately Rs 75,000. The Indian market as we all know is a pretty sensitive one and with the price well beyond the affordable range for many users the Slate comes as a pricey but powerful offering from Samsung. 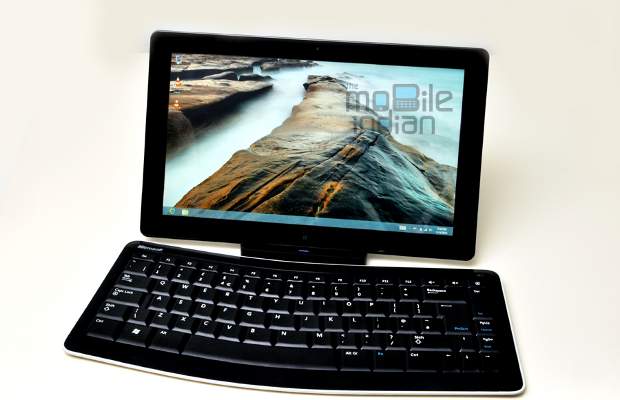 It’s great on performance; brilliant on design and built quality; and offers superb utility, productivity and multimedia as well. But it all boils down to just one thing-its price, which is quite high.