This tablet comes with the best specifications amongst tablets and it's a netbook to boot, but it is expensive. Does the whole package make it a good buy, though? Let's find out.

A bit big Too costly

Introduced some two months back Asus Transformer Prime is the costliest tablet out there-at Rs 50,000. But then its specification list is strongest and comes with the added functionality of a physical keyboard that easily detaches itself from the tablet and when attached to it, transforms it into a proper laptop.

Does it have the performance to justify the hefty price tag? Read on to find out. 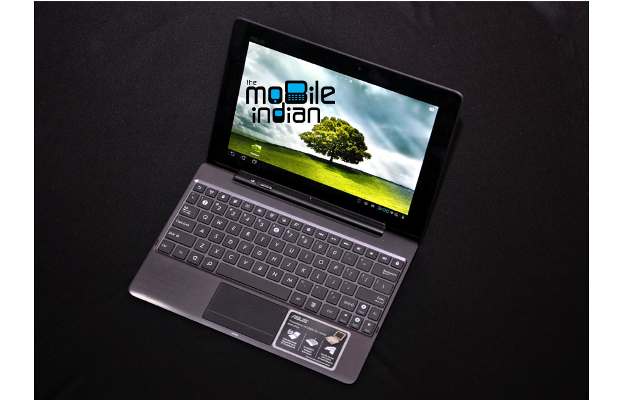 The tablet looks impressive to say the least. The gunmetal finish of the back panel is spot on; the quality is top notch. The front has the screen and black bezel all around with no buttons or any other visible break except for a small front camera and an Asus logo at the top left corner. 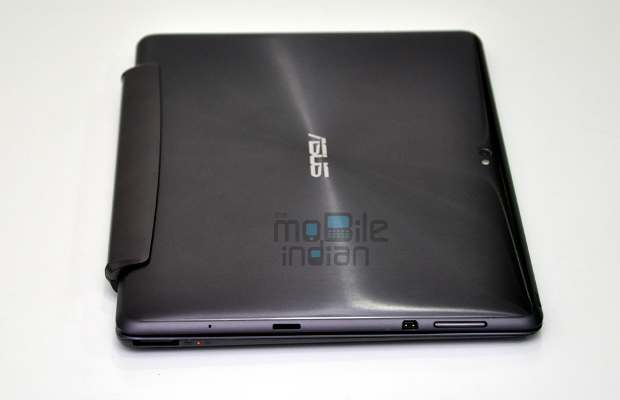 The tablet is super slim with a thickness of just 8.3 mm, but the broad bezel around the screen makes it appear bigger than other tablets like Samsung Galaxy Tab. 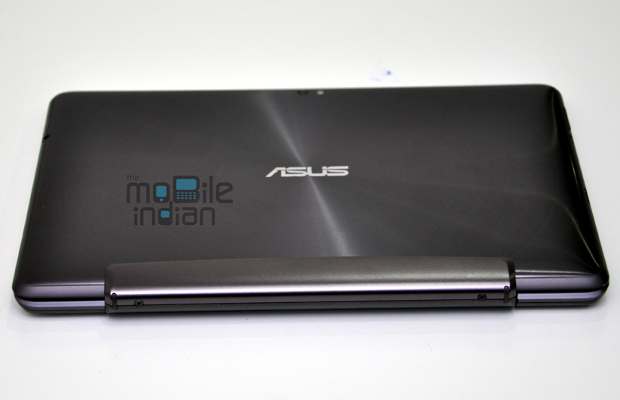 The added width and length is indeed a problem and the tablet appears bulkier despite being quite light at 586 grams, but there is only a minor difference and once you get used to it you won’t even notice it.

In terms of ports and buttons there is a micro SD card port, a micro USB jack and volume rocker on the left side, a power and lock button at the top left side, and a 3.5 mm jack on the right side. The bottom has the proprietary connector which connects with the dock or any other peripheral, and two locks to fix the tablet in its dock. There is also a rear camera and LED flash bang in the middle top portion of the back panel. 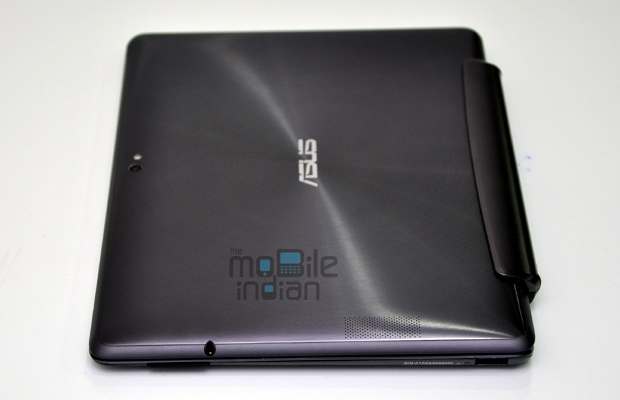 The keyboard dock is equally well-designed; the key placement is perfect. The hinge mechanism too is ideal. There is no flex or crack and the tablet fits in snugly. There is no need to fiddle around to put it in the dock.

The trackpad is also great, and there is an Asus connector, which is the charging port too, a full USB port and an SDcard reader.

The display of the tablet is a 10.1 inch Super IPS panel of 1280 x 800 pixel resolution-the best we’ve seen on a tablet. The display is responsive, bright, high resolution and produces brilliant images. 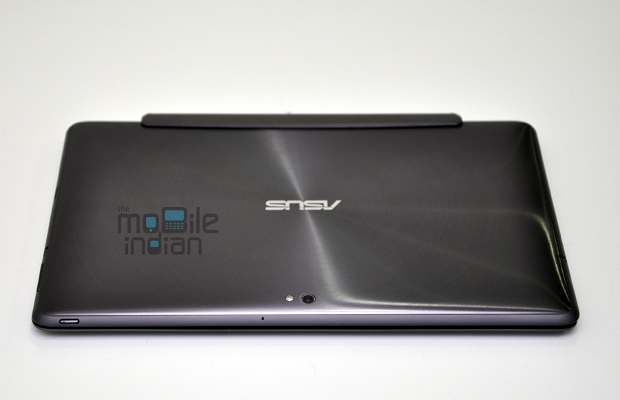 The tablet is the first to get an Nvidia Tegra 3 quad core 1.3 GHz Cortex A9 processor coupled with 1 GB of RAM. With that kind of horsepower you expect stellar performance and it doesn’t disappoint. We never had to wait for any action to get completed; actions were instantaneous where they were meant to be so games that are heavy do take time to open, but when you interrupt a game in the middle and go to the home screen, on returning to the game it starts immediately. 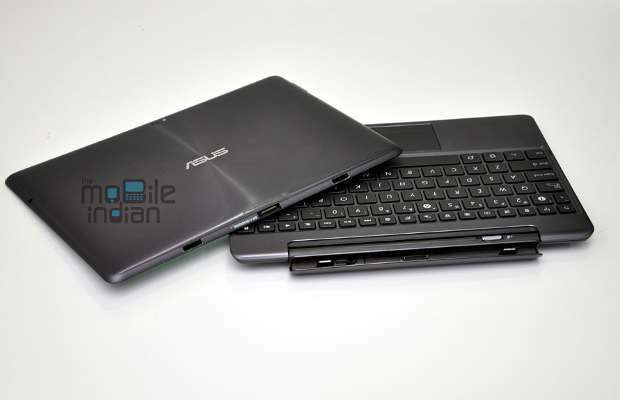 The network is also great. There were no problems whatsoever with WiFi or GPS. All the sensors, including the gyro sensor accelerometer were responsive.

The 8 megapixel camera is among the best we have seen on a tablet, and the single LED flash supports casual low light photography. The camera app is more or less stock Android 4.0 and quite easy to use. 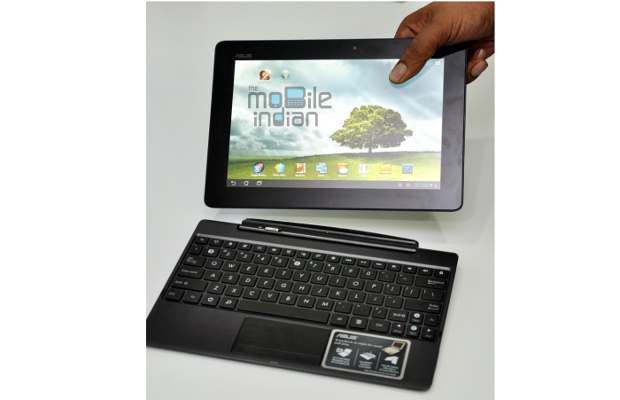 The camera is fast apart from being good in terms of resolution, colour, depth and picture quality. High definition videos that the camera captures at 30 frames per second are also great.

The tablet came to us with Android 4.0 ICS pre-installed. There are certain Asus overlays on stock Android such as the active wallpaper which changes according to the weather outside. But these are very limited

Asus has, however, added certain extra features like cloud storage, which it offers free. The app called MyCloud stores media and document files and has the ability to sync with any desktop for remote access, and a music service called Vibe which allows users to download free music. However, there is currently no Indian music on the service. 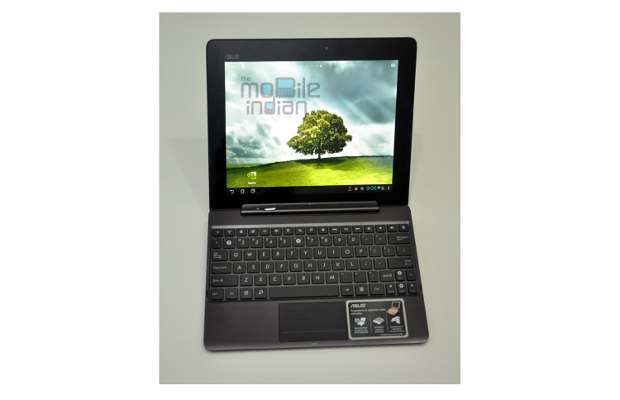 MyNet is another entertainment focused cloud service which allows you to save and share your music across various media.

The biggest tweak happens to be to the keyboard. As soon as you attach the keyboard you get a cursor on the screen; the trackpad on the keyboard even supports right and left click, truly transforming the tablet into a laptop.

The battery is one of the strongest points of the tablet. It is unmatched till now. The tablet and the keyboard lasted three days of not very heavy usage, but continuously with the screen on. We have even watched movies, listened to music, played a few hours of games on it, apart from using the internet. 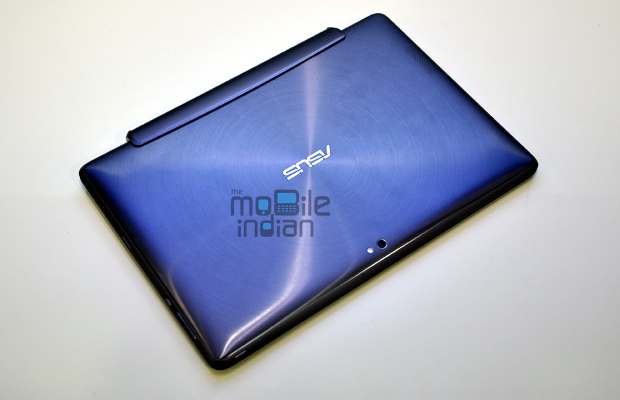 Even the tablet battery showed good results lasting a whole day of movies and work.

The tablet is a brilliant performer, and with a well-designed keyboard it even does a good job as a laptop. While certain applications like MS Office don’t work, now there are many applications like Google Docs, Documents to Go and Polaris Office (installed on the tablet) that do the same job. 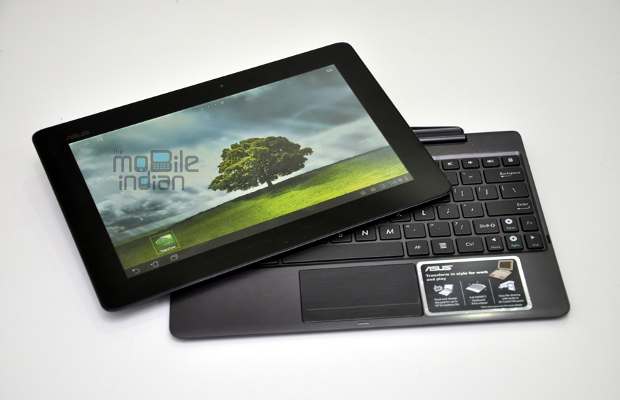 However, as a pure tablet it is still too expensive and as a laptop a bit too small to justify the price. Together the two do make sense but some price correction is still needed.