The Redmi Earbuds 3 Pro come with a bunch of features including Bluetooth 5.2 and a Qualcomm chip. Here's a review of the TWS earbuds. 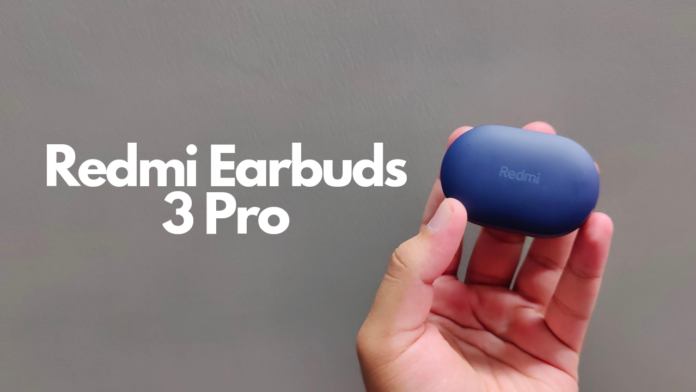 Redmi moved into the TWS segment a while back. The brand came up with the Redmi Earbuds 3 Pro back in early September with a unique design and a price of Rs 2,999. The earbuds have a good set of specs, including aptX Adaptive codec support, Bluetooth 5.2, 7-hour battery life and more. So let’s look at how well it performs in real life during our review of the Redmi Earbuds 3 Pro.

The case and the Redmi Earbuds themselves are made of plastic, same as most of the TWS earbuds out there. The case is in a cuboid form with curved edges. It has a single LED light on the front to know the status of the charge. The colour we got was the Blue one which looks decent in real life.

Inside the case, you get a single button to reset the earbuds. The earbuds sit inside the case parallelly. They have rubber ear tips and magnetic pins so they can snap onto the case and charge. The lid of the case is quite loose and can close on itself if tilted downwards. It also moves a little while it is closed, which I feel shouldn’t happen.

The earbuds themselves fit snug into the ear. They are very comfortable and lightweight to wear. I could wear them for hours without feeling that I was even wearing thIn addition, theyThey create a seal around the ears once inserted, so you hear less ambient noises. The earbuds also have an IPX4 rating to prevent damage against water splashes.

The earbuds have touch controls to perform different operations. For example, you can double-tap to play/pause, touch & hold for the next and previous track, accept or reject calls, and more. The controls are responsive to the touch, and I didn’t have any issues with them.

Redmi Earbuds 3 Pro earbuds feature a QCC3040 chipset and are available with Bluetooth 5.2 connectivity with aptX Adaptive codec. There is also low latency for gaming as well as Balanced and Armature dual drivers. There are also multi-functional touch controls. The buds also have wear detection and can pair seamlessly with MIUI devices.

These specs look impressive and fortunately, they do convert and show effect in practical usage as well, which some of the others we reviewed recently didn’t. The drivers on these earbuds do produce a good amount of bass. The audio focuses mainly on the lows, followed by mids with little detailing in highs. The high bass overshadowed the mids and highs in some songs but sounded enjoyable in some songs.

The sound can be further enhanced using the equalizer on your phone. Also, I feel the loudness was less than other earbuds we recently tested in the same price range. They could have been louder compared to the current loudness.

The low latency mode does help while your game and is decent enough. As there’s smart in-ear detection, once you take the earbuds out of the ear, the audio pauses on its own. I felt there was a delay in pausing the sound when you took them out of the ear. Also, if you have a Xiaomi device, you get a pop-up once you open the case of the earbuds for quickly pairing the earbuds.

Talking about the call quality, the earbuds perform well in environments with low background noise. The other person could hear me very clearly when I was indoors. Calling while being outdoors was decent but not the best because the other person did complain of loud background noises at times. But casual calling is great with the earbuds, and there wasn’t any major issue with it.

The charging case has a 600mAh battery to deliver up to 30 hours of total usage time. The case also comes with a USB Type-C port for charging. In addition, they pack a 43mAh battery in each earbud which claims to offer 7 hours of battery life on a single charge.

The earbuds lasted 6 – 7 hours during my usage at about 80 – 90% volume, which is great. So you can easily rely on these earbuds for those long sessions of music or video streaming—the case charges in about 1.5 hours as per the claim by Redmi.

Load more
Redmi Earbuds 3 Pro ReviewRedmi Earbuds 3 Pro are a good buy only if you are purchasing them for calls because at a price such as this, one can look at products from Oppo that offer better audio quality. The quality of hardware could also have been improved.