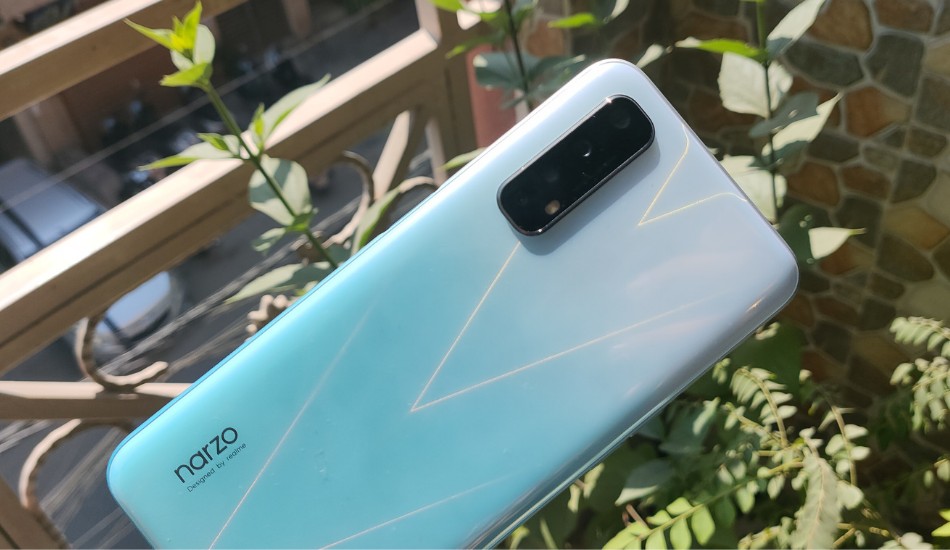 We have got our hands-on the Realme Narzo 20 Pro which is the latest from the company under its Narzo 20 series. Let's take a look if the device stands a chance against its competitors.

Realme announced three new phones under its Narzo series, out of which we are going to review the Pro model today, the Realme Narzo 20 Pro which is priced at Rs 14,999 for 6GB/64GB variant and Rs 16,999 for 8GB/128GB variant. The device competes with the company’s own Realme 7 that was also launched just last month. Another device we are gonna compare it with throughout the review is the Poco X3 which is also priced in the same segment. Let’s take a look at how the device performs! 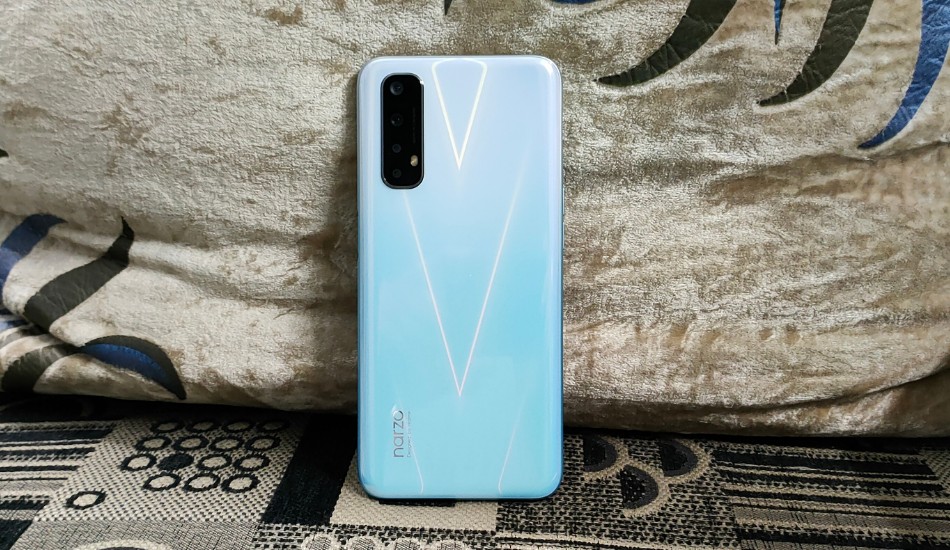 When you hold the device for the first time, the device does give you a premium feel even though the back is made of polycarbonate. We have the quad-camera module on the back and the Narzo branding at the bottom left corner. The ‘V’ pattern is all over the back, which is the traditional pattern style for the Narzo 20 series.

The unit we got was the white colour one with the blue gradient (called White Knight) and the device did look good in hands. The device didn’t feel heavy at all, though it is on the thicker side. Realme has also provided a transparent cover inside the box. 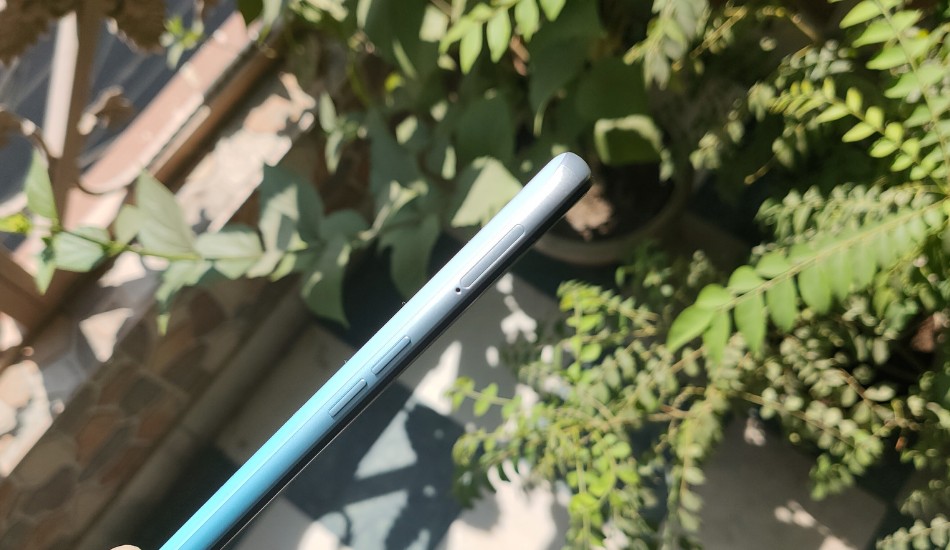 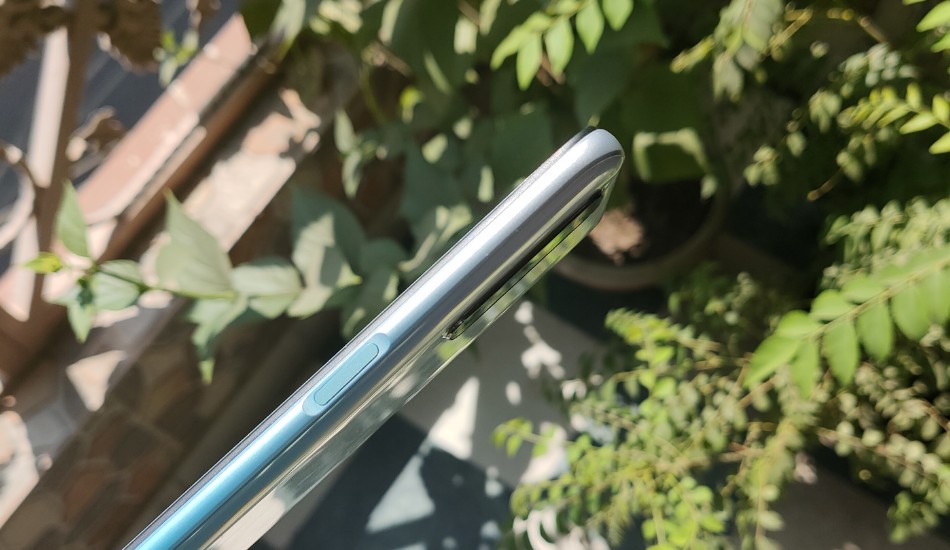 On the left we have the volume buttons which felt quite recessed into the frame and didn’t feel much clicky for some reason. Then we have the SIM tray with Dual-SIM and Micro SD Card support. On the right, we have the power button which also doubles as the fingerprint scanner. The fingerprint performance was perfect and the device recognized the fingerprint instantly without any delays.

At the bottom, we have the USB Type-C port for charging, a mic, a 3.5mm headphone jack and a speaker which sounded terrible. It was loud enough but sounded too muffled, so don’t expect anything extraordinary from the speaker. 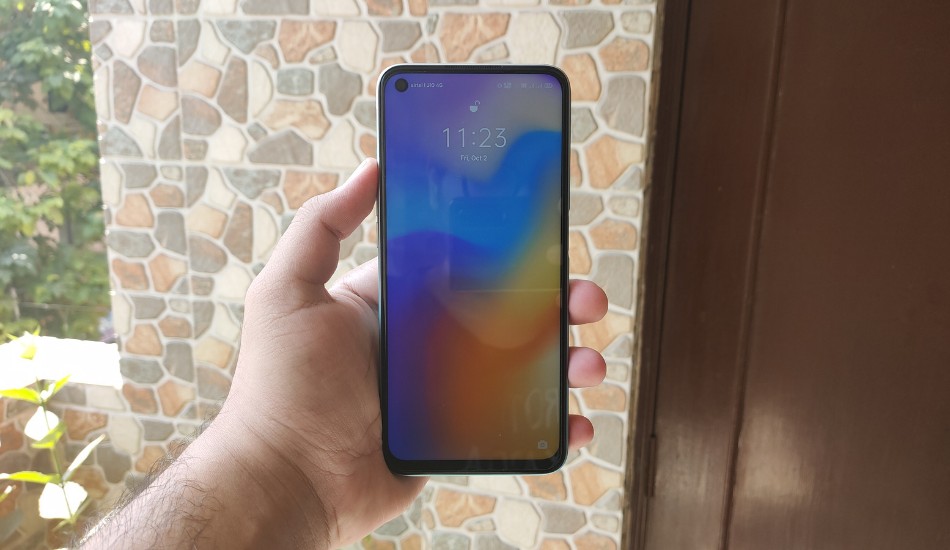 On the front, we have the 6.5-inch Full HD+ display with a resolution of 2400×1080 and a 90Hz refresh rate, and also the punch-hole styled front camera at the top left. The display, in my opinion, was the same as the Realme 7 which we reviewed a few weeks back. The colours were fine but the brightness was an issue for me where I had to keep it on high value for comfortable viewing. The viewing angles were also good. The 90Hz refresh rate definitely felt smooth and enhanced the experience.

One thing to note here is that Poco is offering 120Hz refresh rate display and 240Hz touch sampling rate with its Poco X3 at the same price which might be a deal-breaker for some.

The Realme Narzo 20 Pro is powered by the same processor as the Realme 7, which is the MediaTek Helio G95 which is a gaming processor from MediaTek. The device we got had 8GB of RAM and 128GB of Storage.

The performance on the device was pretty good. The device handled everything with a breeze which I threw at it. App Switching was smooth and lag-free. RAM management was great as the device kept most of my frequently used apps in memory and loaded them quickly whenever I needed that specific app. 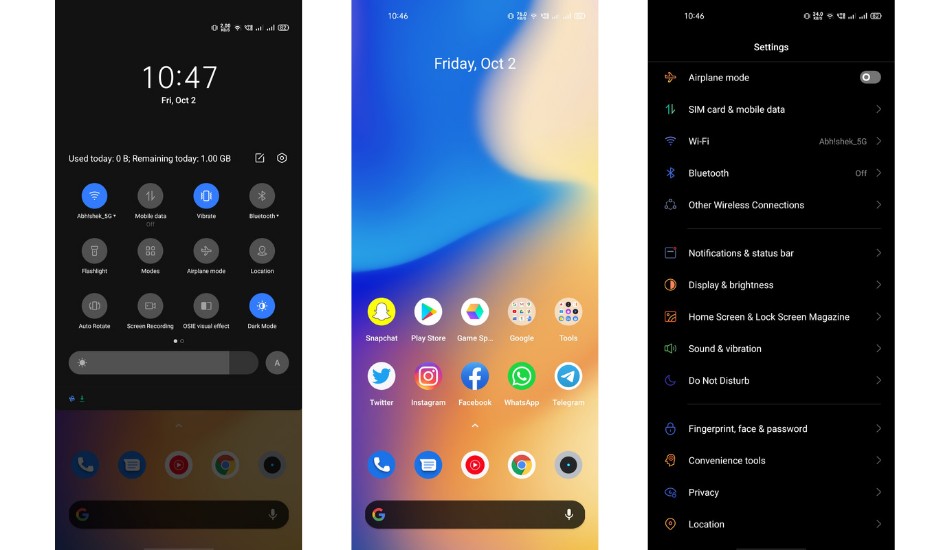 The device runs on Realme UI 1.0 and is slated to receive Realme UI 2.0 based on Android 11, sometime in December 2020. The software was feature-packed and had everything from Off-screen gestures, App Lock, to theming. The assistive ball, smart sidebar, etc are some great features inside the software that are convenient to use.

One thing which bugged me about the software is the pre-installed bloatware. Let’s take the browser app for example, which kept sending me notifications for some needless offers and news as shown in the screenshot below. And the worst part is that I can’t disable these apps.

Yes, I can turn off notifications from the app, but if I don’t want to use the pre-installed browser, there should be an option to disable it, which in this case, the option is literally disabled itself. One wouldn’t expect these kinds of ads or unnecessary notifications from a device if he/she is shelling out 16,000 or 18,000 rupees. 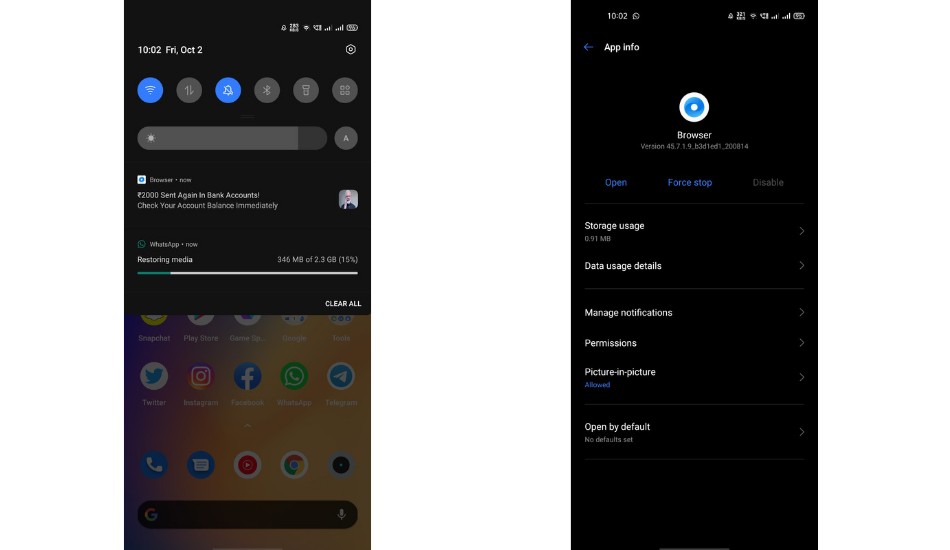 Coming to gaming, the device was great while handling games like Call Of Duty Mobile and Asphalt 9 at high graphics. The device outputted 60fps while playing Call Of Duty Mobile at ‘Very High’ graphic setting which was the maximum available in the game. Asphalt 9 on the other hand was just playable at the highest graphic setting. I did notice some frame drops but the device was constant at 30-40 fps which is great. The software also features a type of Gaming Mode which can help improve performance even further. 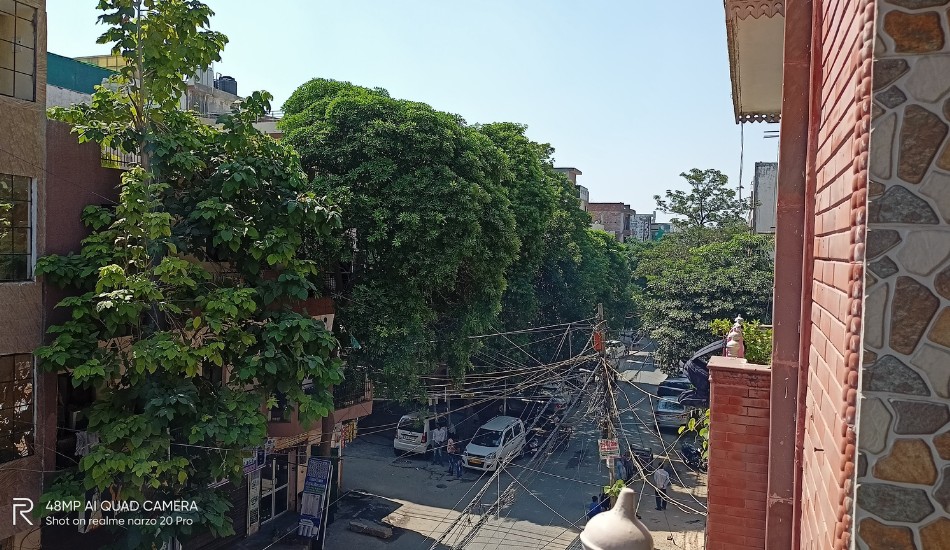 The camera performance in broad daylight was good with natural colours but the photos lacked detail. When zoomed in, there was the oil-paint effect in photos and sharpness in the image seemed to be missing. 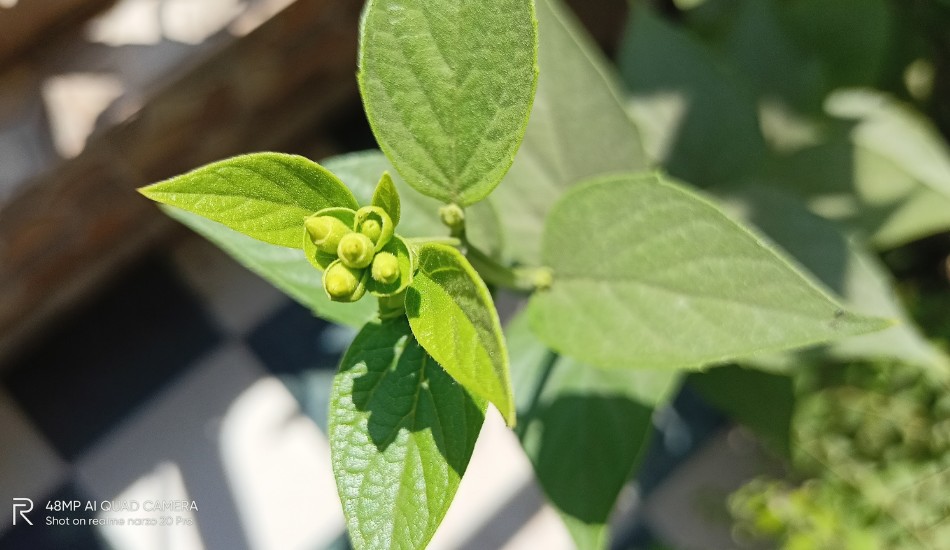 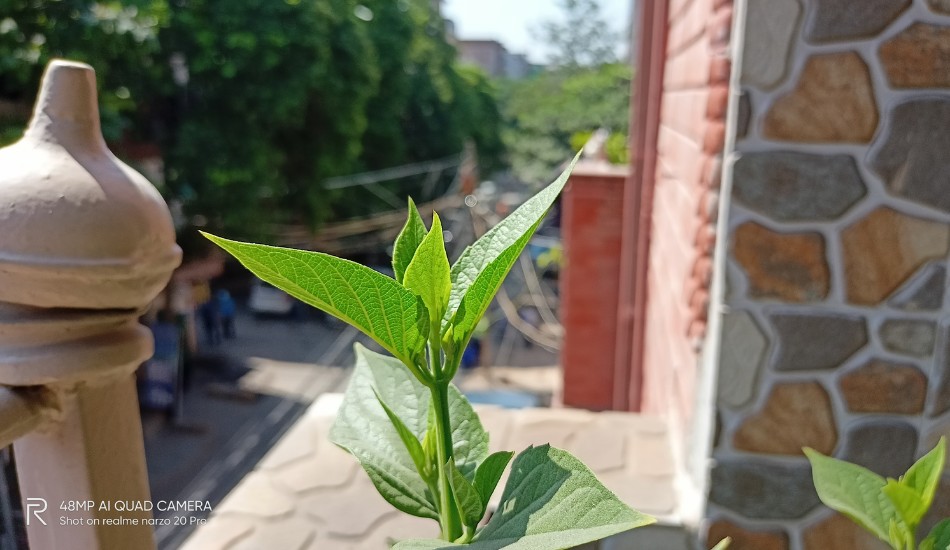 When taking close-up shots, the device gave a good bokeh effect in the behind with good edge detection, the colours were good, but again what lacked was the detailing. 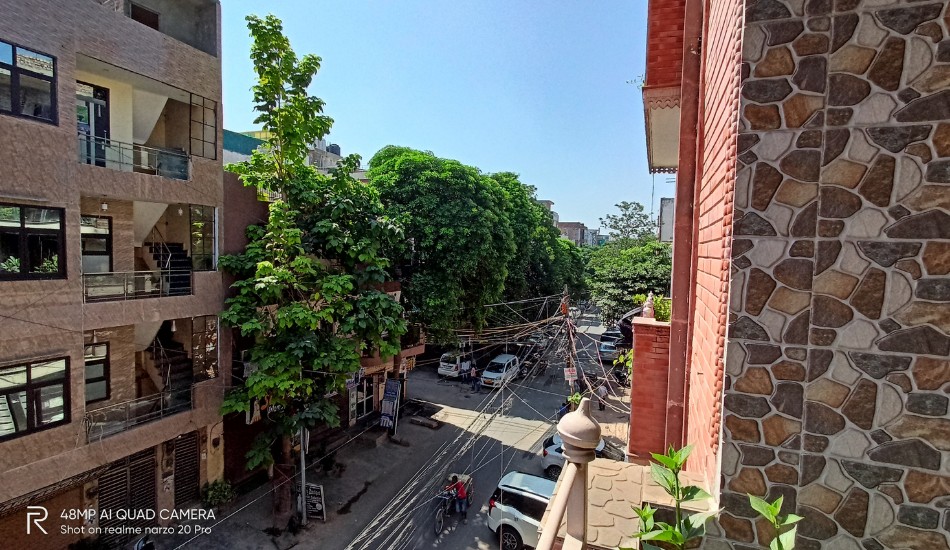 The Wide-angle shots on the other hand tend to over-saturate the colours which do look good in some scenarios but not all. There’s a noticeable drop in quality when switched to wide-angle camera and same as other cameras, the sharpness was missing. 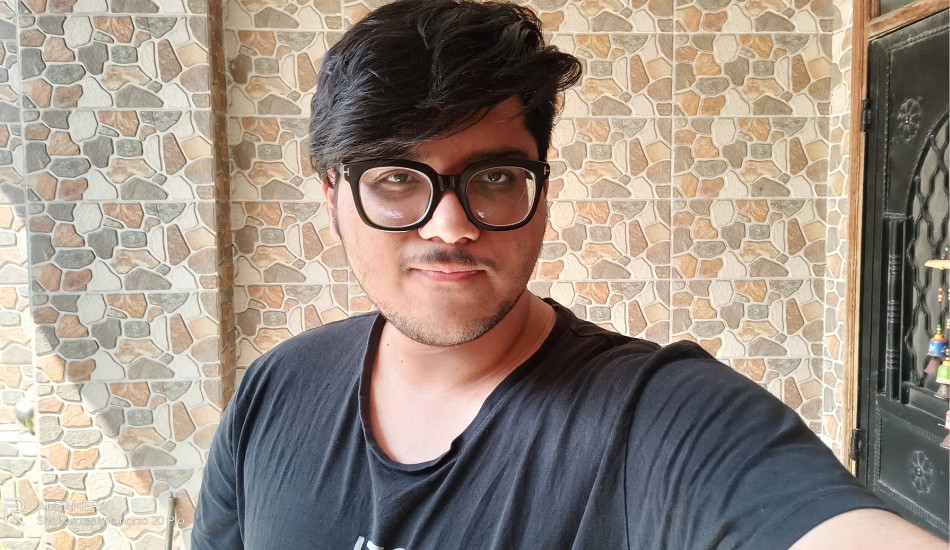 Coming to selfies, the colours looked good and the picture came out to be usable, but nothing extraordinary here. 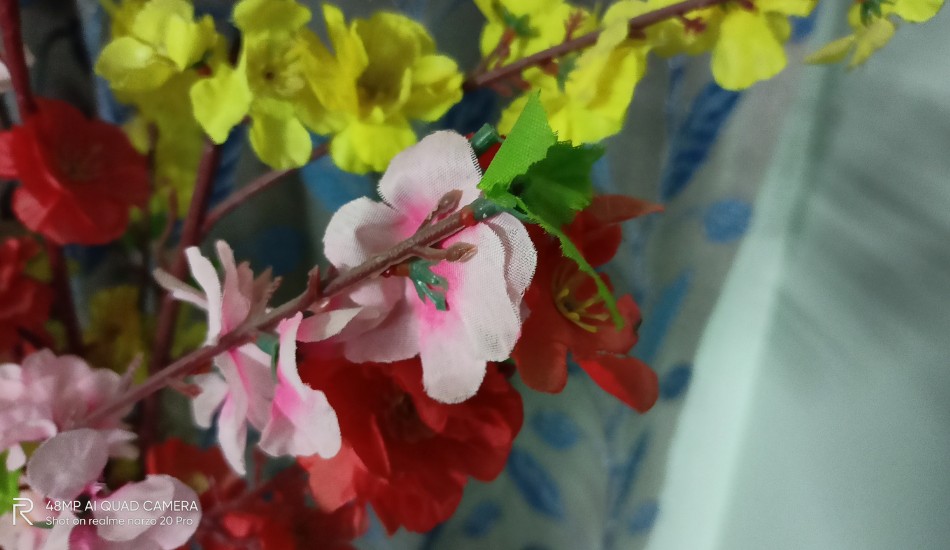 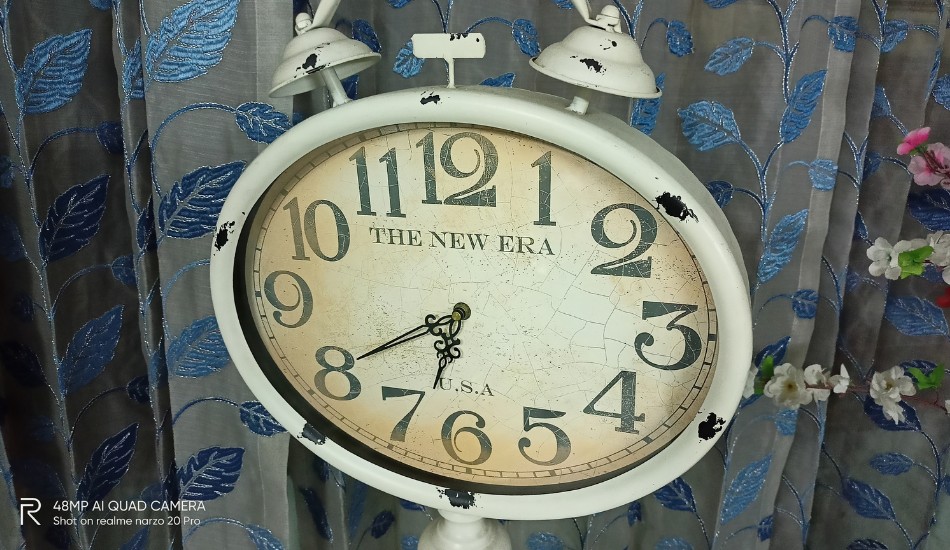 Low-light photography was average in my opinion. There was very little to no detail in the photos and even the colours looked strictly average.

One of the strongest points for the device amongst others is its battery. The device has a 4,500mAh battery with 65W fast-charging support, called SuperDart in Realme’s case. The Poco X3 though offers a bigger battery which is 6000mAh but with slower charging at 33W.

The device gave me around 5.5 hours of screen-on time with still 15% of juice left in the battery which is amazing. In the total usage of 16.5 hours, the device was on stand-by for about 6-7 hours in which only 1% of the battery dropped.

The rest of my usage included 40-50 minutes of heavy gaming and browsing through Chrome, Instagram, some WhatsApp chatting and viewing videos on YouTube. 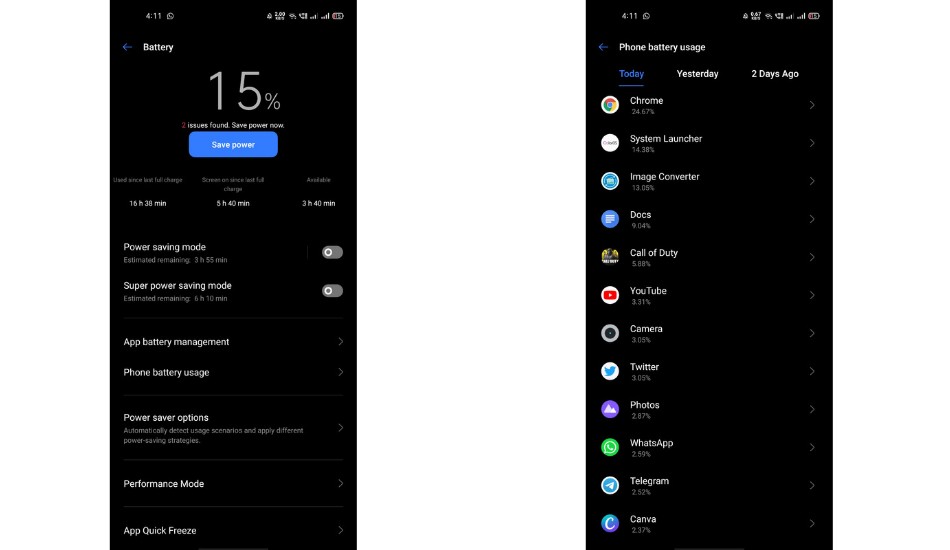 With 65W charging, the device charged from 12% to 100% in about 40 minutes which is again great. Overall, the device just excelled in the battery department.

The Realme Narzo 20 Pro is a great device for its price with stable performance and steady build quality, but you would have to compromise in the camera department and the Bloatware which does hamper the user experience.