Realme Narzo 10 Review: Can it survive the competition?

Realme Narzo 10 is powered by a massive 5,000 mAh battery and comes with an 18W fast charging power adaptor. During our usage, we found out that the phone can charge around 30% battery in 30 minutes

Realme Narzo was lauched a few days back for Rs11,999. It is available in two colour options – White and Green. We have been using the device for a couple of week nows now and here is our review of Narzo 10.

The Realme Narzo 10 comes in a bright yellow box, just like the previous smartphones launched by Realme. The retail package will include an 18W charging brick, a USB-C cable, user manual and a soft transparent case.

The Realme Narzo 10 display is made of a Gorilla Glass 3 and has a plastic back and frame. It has a matte finish and the phone is comfortable to hold and is not slippery.On its left, you’ll see the Volume keys and triple card slot which can hold two nano sims and a MicroSD card. The USB-C port, the audio jack, and the speaker at housed in the bottom panel. The power button is on the right.

Realme Narzo 10 lacks a notification LED and the earpiece is just above the front camera and is not unnoticeable. The fingerprint reader is on the back and performs well. The back panel shows off laser beam like design when it is turned and twisted. In a nutshell, Narzo 10 has a slim profile and fits in hand comfortable. As far as look is concerned, there is nothing much to complain. 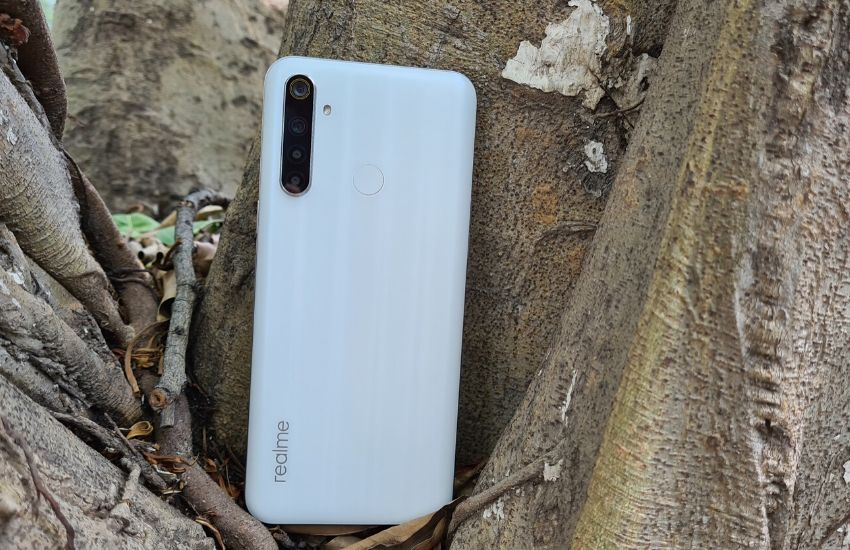 The Realme Narzo 10 has a large 6.5″ IPS LCD screen with a notch at the top. It has a resolution at 720 x 1,600 pixels is quite average. Viewability is bright light is an issue, but in indoor or soft light viewing experience is excellent. The colour rendering is average and the smartphones seem to have a blue tinge. It can be managed by activating the warm colour setting.

The Realme Narzo 10 is powered by a massive 5,000 mAh battery and comes with an 18W fast charging power adaptor.During our usage, we found out that the phone can charge around 30% battery in 30 minutes which is not really fast. 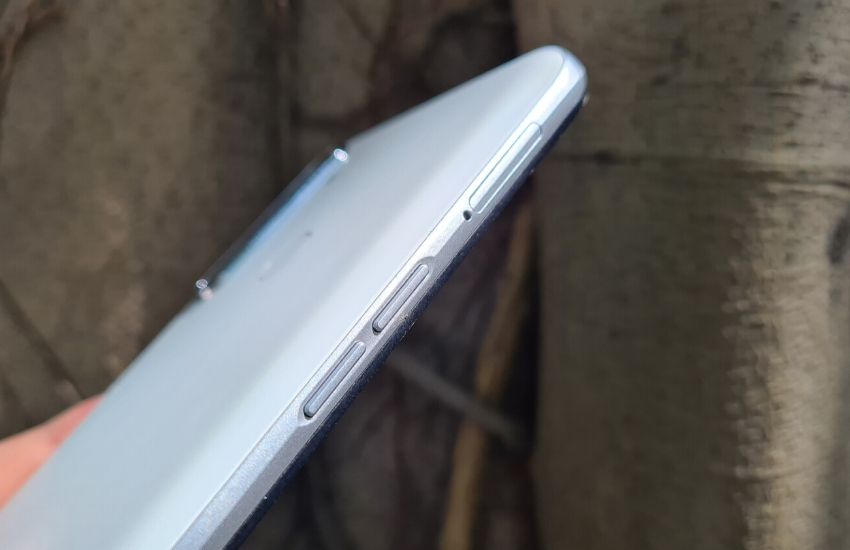 The Narzo 10 gives you an excellent audio quality thru the earpiece during a call. It is loud and crisp. It has a single down-firing loudspeaker that gives a good output for vocal but for music is it just average.

The Realme Narzo 10 comes loaded with REalme UI which is based on Android 10. It feels much better than the previously used ColorOS UI.The new launcher is clutter-free and follows a simple yet powerful design language. As per liking, one can use the app drawer or Apple-like layout for accessing the apps.The Realme UI supports four different styles of icon pack – default, material, pebbles and custom. I personally liked the pebble pack.

Similar to the Samsung Galaxy and Infinix smartphones, the Realme UI offers a Smart Sidebar on the edge of the screen which acts as a shortcut for accessing apps. One can add or delete the list of apps in the sidebar. One negative aspect of the Realme UI is preloaded apps. Narzo 10 comes loaded with a handful of preloaded third-party apps, but thankfully one can delete or disable them. 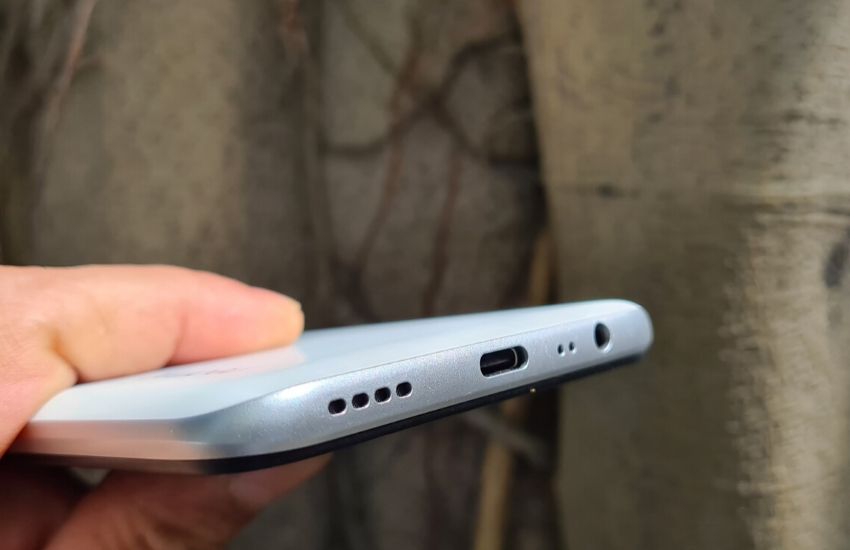 The Narzo 10 is propelled by MediaTek Helio G80 – a gaming-centric SoC. It packs 4GB of RAM and has 128GB internal storage which can be further expanded via MicroSD card to 256 GB.

The performance of the smartphone is smooth. It gives a lag-free experience during multitasking and accessing apps is no problem at all. As far as gaming is concerned, sometimes we noticed a lag while playing graphic-intensive games like PubG. We would suggest keeping the PubG at a medium setting to enjoy the game. 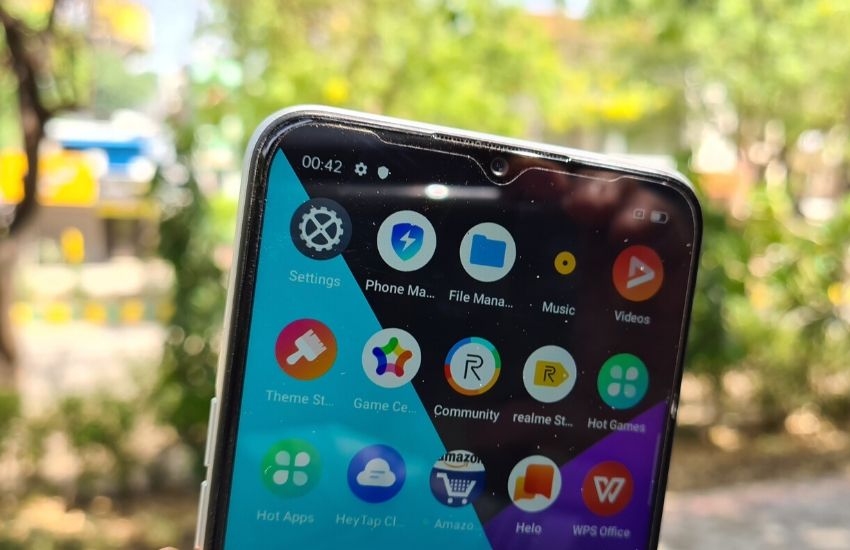 Narzo 10 has a quad-camera setup on the back. It compromises of 48MP sensor, 8MP wide-angle sensor, 2MP portrait camera and 2MP macro lens.The camera app supports AI scene recognition and comes with Chroma Boost, which stacks a couple of pictures and improves the dynamic range. The smartphone also supports 1X, 2X, and 5X, but beyond 1X is only digital zooming.

The picture quality in bright outdoor light is good. Snaps showcase accurate colour and detail is good. Having said that, if you click pictures of the garden or flowers, then the colour is off. They are either a shade lower or a shade higher as compared to the original picture.
The photos from the ultrawide camera are quite good and don’t show any barrel effect, but you notice some drop in detailing. In the low light, the camera will disappoint you. Pictures will be soft and loaded with noise.

In the front Realme, Narzo 10 has a 16MP selfie camera with fixed focus. The selfies are come out well but detailing could have been better.If you are looking to explore the Video recording feature, you can shoot at 1080p. The output is general is impressive though the phone doesn’t have EIS.

Realme Narzo 10 is good budget smartphone which delivers stable performance. It may not have a smooth run as it will face stiff competition from its own sibling Realme 6 and Xiaomi. So should you buy it? Yes, you can consider it if you are a Realme Fan, but if the budget can be extended a bit, you will have plenty of choices which offer better performance, display and charging capability.