3D but sadly with a lot of strain for naked eyes.

Average battery lifeStrain on the eyes in 3D mode

The Micromax Canvas range of Android smartphones has been immensely popular and successful. It can also be said that Micromax has to some extent fueled the 5 inch device size category among low cost devices. With over five Canvas devices Micromax is now looking at innovations that can be included in these devices. Canvas A115 is its latest innovation in the Canvas product range that comes with an on demand stereoscopic 3D display.

This device can perform in both 2D as well as 3D modes with the help of the hardware and software configuration adopted for Canvas 3D A115. While it sounds good lets find out how the device really fares in the real world.

Micromax Canvas 3D A115 adopts the same old design philosophy and comes with a 5 inch display. The device has a compact yet useful design with three feather-touch keys that we see on most smartphones today. It comes in black color, which makes it look sophisticated and adds to its appeal. The front features a flush clean look and the absence of hardware keys really makes the device look appealing. 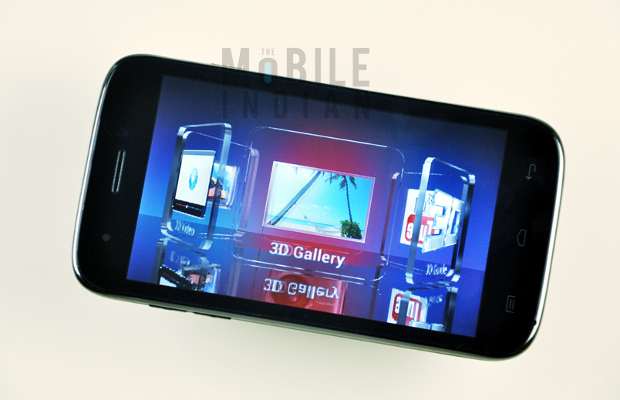 The rear surface with its matte finish surely comes in handy as fingerprints are hardly visible on the body, plus minor scratches don’t show. Also, the finish adds to the grip of the device, which is crucial for any smartphone. 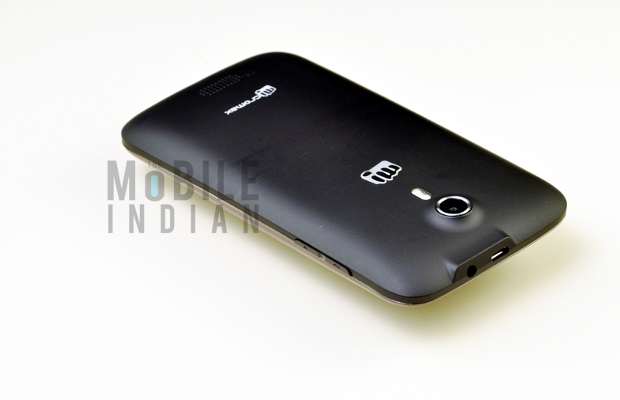 The polycarbonate body is good and sturdy while the connectors such as USB have not been covered to maintain the aesthetics and the look of the device. Overall the Micromax Canvas 3D A115 is a solid device while the protective surface on the display is good enough to withstand minor scratches and accidental falls from a low height.

The Canvas 3D A115 is sleek and although we would not call it lightweight the device’s design makes it easy to hold for long. Its top features a 3.5 mm audio connector as well as a USB connector. The right side houses a standby/power key, which is a standard now and is very functional. The left side of the device features volume rocker keys. 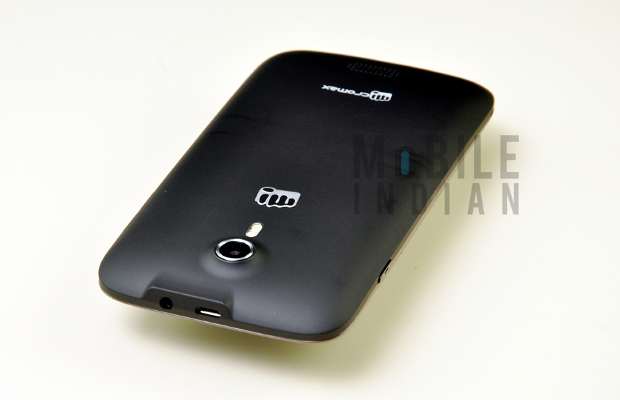 The placement of keys on both sides of the device makes them easily accessible with either the left or the right hand. To add a touch of look to the device designers have given it a glossy graphite band all around that looks good as well.

The lack of hardware keys on the front gives the device a good look and at the same time protects it from accidental key presses as well. The earpiece cavity is protected by a protective mesh, which in the longer run will help protect the earpiece and the speaker inside.

Canvas 3D is Micromax’s first ever and probably the lowest cost 3D smartphone to have ever been launched, and this stereoscopic 3D display functionality is one of the key features of this device. Having a stereoscopic 3D display means that the users can enjoy the benefits of 3D videos and images without the use of any additional hardware such as shutter glasses, which most 3D televisions and displays require today.

The display on the Micromax Canvas 3D is a big 5 inch one that features 800 x 480 pixel resolution. Although the resolution is not HD its pixel density is 240 pixels per inch and that allows users to see visuals and text with clarity and greater depth while avoiding pixilation. In terms of color reproduction the display is great and quite vibrant but its brightness level is somewhat of a downer, especially in 3D mode, and that puts a lot of strain on the eyes. 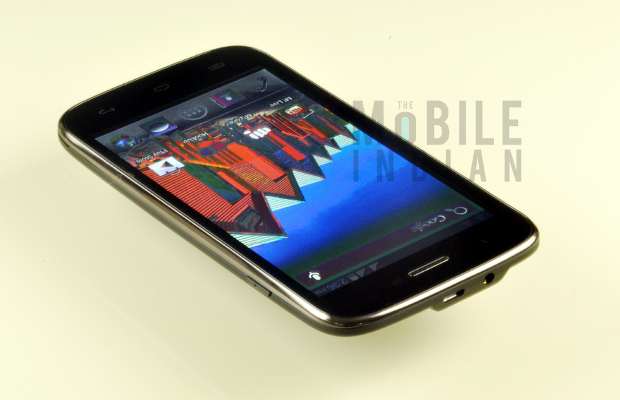 The display in 2D mode is in one word flawless, and is impressive on every front. While 3D videos look great and there is no lack of vibrancy and contrast the lack of brightness is surely a cause of concern.

The capacitive touch supported by the device is very responsive and accurate. There is no lag or false input faced all throughout the review and we were really impressed with that. The feather touch keys are nice as well and the backlight of the touch keys have a power save feature that turns them off after a few seconds to conserve battery power.

The Micromax Canvas 3D A115 is powered by a MediaTek MT6577 1 GHz dual core processor and a PowerVR SGX 531 display processor from Imagination Technologies. The processor is fast and zippy, which is visible in most applications performing well at all times. It is coupled with 512 MB of RAM, which is one of the concerns with the device and it shows when applications load. With multiple applications there is a lag in the performance. This configuration is good for a smartphone but there should have been more memory on board. 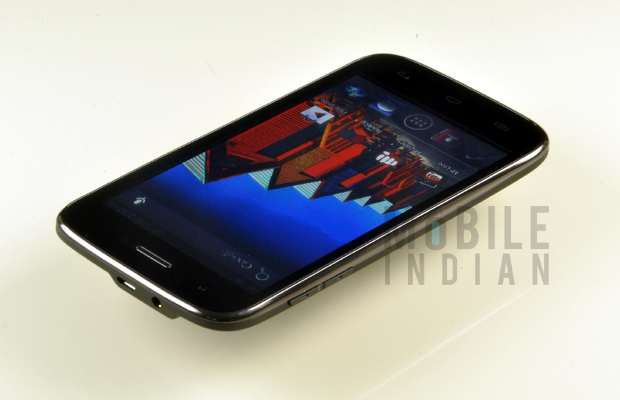 The phone features 4 GB of internal storage, which works great for all applications, plus it can be further upped by 32 GB with the help of external micro SDHC data cards. The MTK MT6577 CPU is good for mid range smartphone applications and in the Antutu benchmark Micromax Canvas 3D got a score of 6726 and places near to the older Samsung Galaxy Nexus in the benchmarking results. The smartphone, plus the dual core processor, really keep performance in tune with demands from applications.

Featuring Android Jelly Bean 4.1 operating system the Micromax Canvas 3D is compatible with most of the applications available on the Google Play Store. And being the latest operating system Canvas 3D benefits from Project Butter, which offers users a fluid user interface . The operating system Google Android is present in its native state with the least possible inherent applications running in the background, so there is ample free memory available for the device to perform well and we like that a lot. 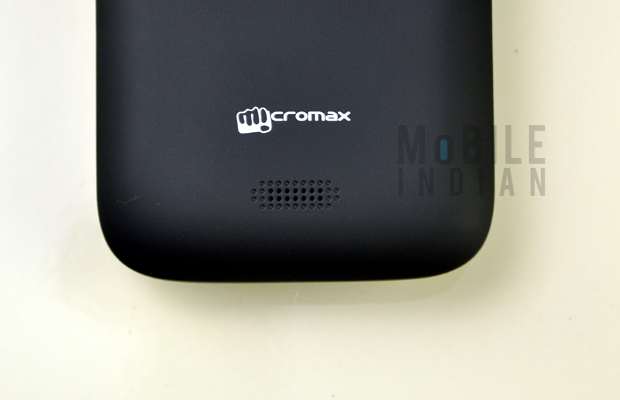 The major customizations are done on the lock screen from which we have been given quicker access to messaging, calling and the 3D area. Surprisingly, we think that Micromax earlier decided to do something more with the lock screen, as in, offer multiple lock screens as well, but somehow dropped the idea. This can be seen on the lock screen as it shows the number of screens on top of the display as two (screen shot attached).

The device features a 0.3 megapixel front facing camera that is good enough for video conferencing and that’s about it. At the rear there’s a 5 megapixel camera, which is better than the front facing one, but by a limited margin. The camera is unable to capture even 720p high resolution videos. The quality of the camera is good in bright to medium light conditions while in low light the camera automatically adjusts the light with the help of a flash and can take good close shots. The camera software is smart and can capture 3D images, which is nothing more than adding some depth data to a 2D image with the use of software for post processing. 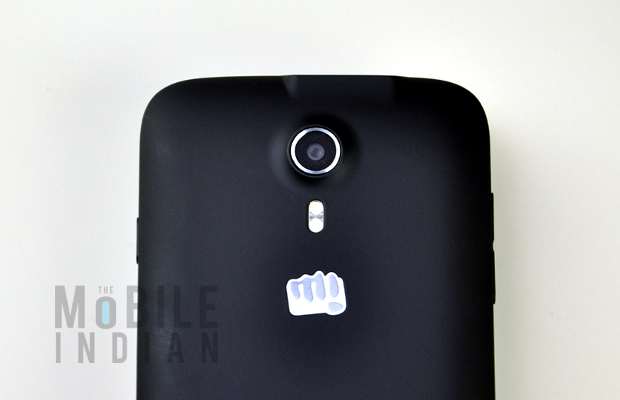 On the multimedia front Micromax Canvas 3D supports most audio and video codecs supported by the operating system natively, plus users can easily download an application from the Android marketplace as it is a registered Android marketplace user device.

On the connectivity front the Canvas 3D features dual SIM, WiFi and USB connectivity for fast data transfers and access. WiFi is good and speedy while cellular data speeds are decent. 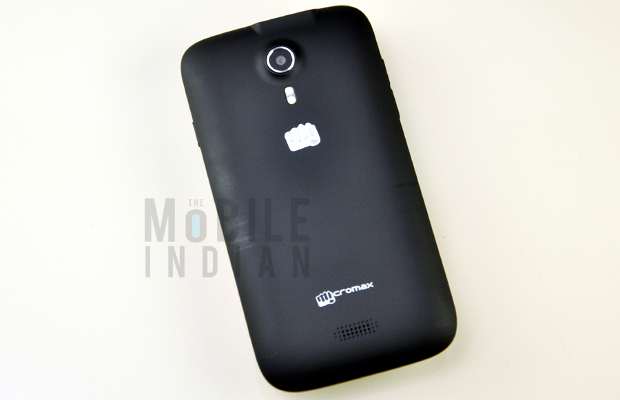 The battery life of Canvas 3D is not one of its major advantages. The device is good in terms of features and performance, but battery life is on the average side. Under nominal usage the smartphone lasts for one day with occasional gaming and net browsing over WiFi and cellular data. 3D playback certainly draws a lot of battery from the device and offers lesser backup as well.

The Micromax Canvas 3D A115 is a good and price conscious 3D display based Android smartphone that impresses with its price and to an extent with its performance as well. Considering that it’s the cheapest 3D smartphone available the device is a great buy. So if you are looking for a good smartphone with 3D functionality, without burning a hole in your pocket, then look no further as this is how pocket friendly 3D can be. 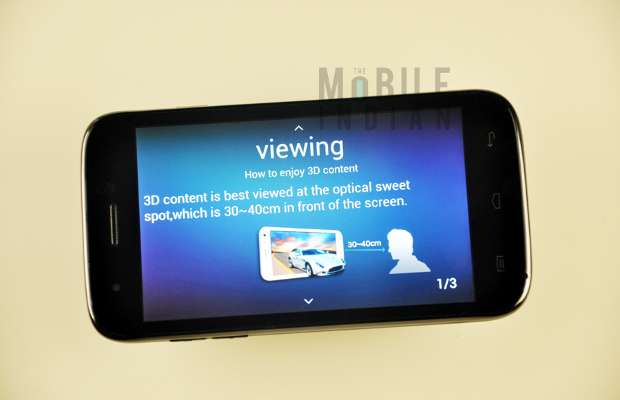 But be aware that the display causes a bit of a strain while watching 3D.