Chic styled and rounded corners bearing HTC Rhyme is the handset that marries feminine looks with a smart hardware power.

HTC has finally stepped into the gender equality arena and made a sincere attempt to draw a thinner line. The new HTC Rhyme handset is aimed at the chic and well-informed feminine audience which is clear from the handset colours offered and the native themes pre-loaded.

HTC Rhyme steps in like a HTC Desire S albeit with different styling and software experience. The Rhyme debuts the HTC Sense 3.5 user interface which makes the phone look fresh and different from its predecessors in terms of software. 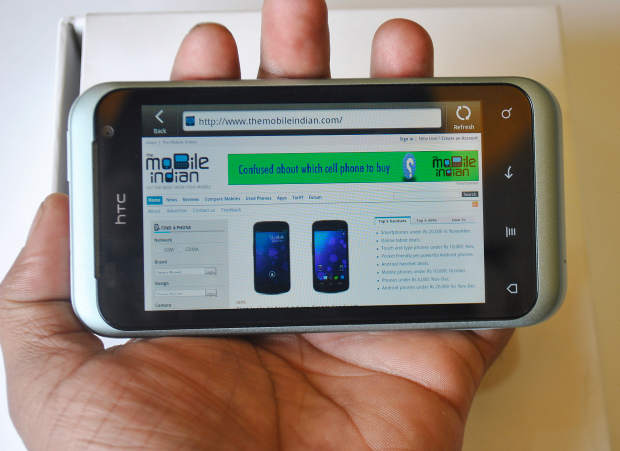 HTC Rhyme is targeted towards the fashion aware audience who would love to carry around a fairly decent smartphone with different than a regular colour tone. To please the girls and women, HTC has added a ‘Charm’ accessory which does more than resting across the slender wrists. The Indian version of HTC Rhyme packaging comes in the usual white box whereas the ones outside the United states comes in a box that matches exactly to the colour of the phone. Then again, we are not sure if HTC will be offering such packaging for India as well.

Take a look at our sincere and gender-equal account of HTC Rhyme. 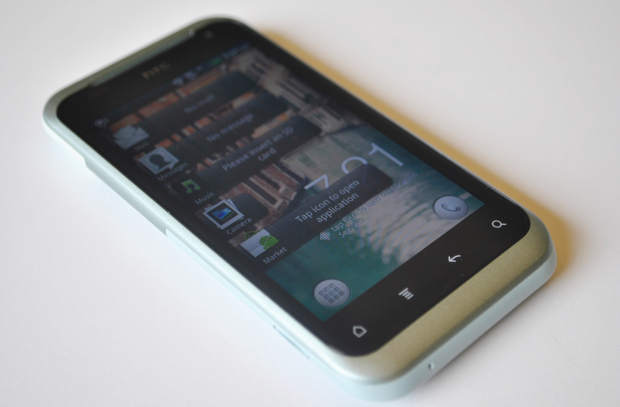 HTC has earned its place by offering unibody smartphones that not only look good but also feel great to hold in hands. The Rhyme is the company’s latest creation that comes with a unique mix of a brushed aluminum unibody bezel that carries a colour of the handset and has a polycarbonate back panel with rubberised coating on it.

At this moment, Indian consumers will get the clearwater colour themed HTC Rhyme. Front panel design resembles its recent Android-based models that have four capacitive buttons with a little bit of bezel lining below it. In case of Rhyme, HTC has offered the rounded corner design for all four corners and even the chin of the handset has a slope. That indeed states about the deep thought put into the physical designing and styling of the handset except one place &#151 the micro USB slot. 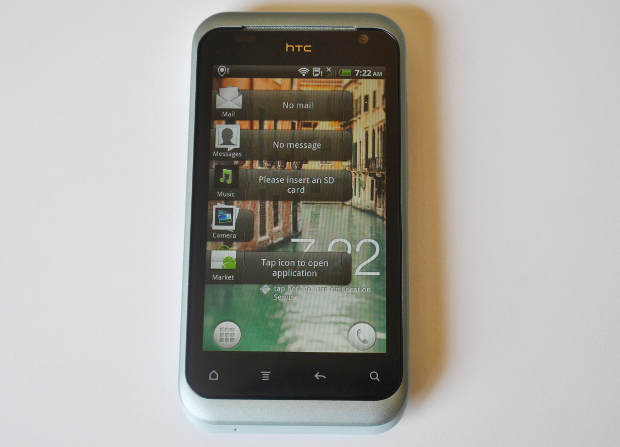 The Rhyme has a micro USB charging slot covered by the cap that can be opened using a nail of thumb or fingers. HTC designers totally left out those people who may not have longer thumbnails. Physically, the Rhyme feels really good to hold with the combination of brushed metal and slightly rubber-like polycarbonate back panel for grip. Indeed, HTC does make some of the most beautiful and palm-friendly devices.###PAGE###

HTC does deserve a pat for packing good hardware together that works harmoniously to offer decent results in terms of performance. Keeping the price factor aside, the Rhyme is the one perfect mid-range Android that any person looking to step into world of Android should buy first.

Featuring the a 3.7 inch touchscreen display, Rhyme offers WVGA (480×800) native resolution that makes the text as well as images look relatively crisper compared to the 4 inch LCD display bearing handsets. But the display is fingerprint and dust prone so one may have to keep wiping it often.

Measuring just about 11mm slim, the HTC Rhyme weighs 130 grams with its non-removable battery. At the top lies the 3.5 mm audio port bit spaced away from the power/sleep button. The micro USB charging and data transfer port is located on the lower left side of the bezel and on the right side are the volume control buttons.

The SIM card slot and the micro SD card slot are located under the plastic back panel cover. Battery is non-removable so users can just see a part of it. At the back lies a speaker mesh just below the 5 megapixel camera sensor along with LED Flash. There is no dedicated camera button for this handset which is bit of a surprise. 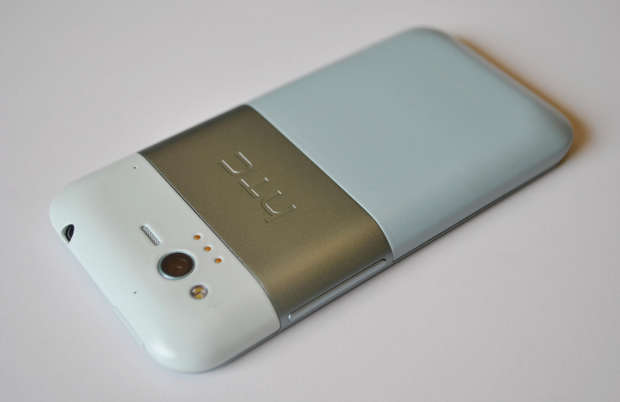 Front facing camera is a 0.3 megapixel one with VGA video quality. However, the video chat is totally dependent on the third party software such as Skype. The front facing camera will be aptly put to use with the Mirror app that comes pre-installed.

HTC has also bundled a Charm string which has been optimised with the Charm Notifications accessible through the settings app. So whenever there are new messages or calls missed, the bundled charm attached to the phone keeps blinking to indicate something new has arrived on the device.

HTC branded smartphones carry good specifications and premium design as well as finishing. Unlike the US version, the Indian version of HTC Rhyme comes in white packaging which includes a data cable, charging adapter and a pair of earphones. Funny part is that HTC misses out on adding a micro SD card because the onboard memory won’t let you save songs or photos.

The bundled ear phones with flat-wire styling do look good but feel quite childish with the plastic hands-free button control panel. In terms of audio quality, they are decent enough for casual listening and buyers should certainly thank HTC for bundling extra pair of silicone earbuds.###PAGE###

Rhyme debuts the latest version of HTC’s proprietary user interface. With the new HTC Sense 3.5 user interface, the Rhyme gets a revamped home screen where the arc-ular dock bar is replaced with dedicated circular phone button on the right and a circular launcher short cut on the left. 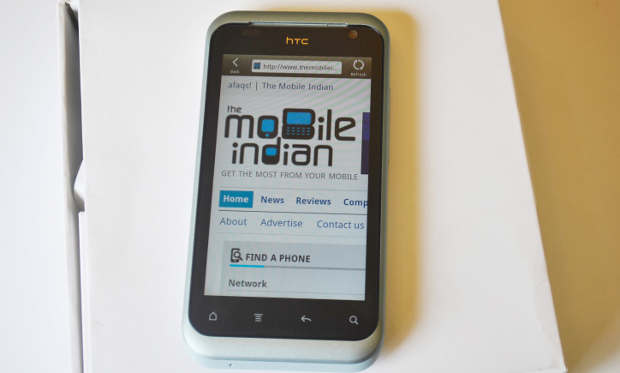 The Sense 3.5 UI also brings new set of third-party widgets like the Notes widget and set of new animations. Also the launcher now carries a gray colour background with rectangular buttons at the bottom. Home screen panel view now allows removing the unwanted panels from seven to less. At the first boot, HTC does show up an option wherein user can allow HTC to pull reports of the crashes and software usage.

By default, the Rhyme runs Android 2.3.5 Gingerbread version and has a bunch of pre-loaded applications like the Dropbox, Facebook, Twitter App, Plurk, Polaris Office, Adobe Reader, FB Chat and Endomodo. For the “always online and connected” folks, HTC has offered enough social network integration with Twitter and Facebook apps along with the FB chat which works separately. Built in Reader App is actually the Kobo reader app customised specifically for the HTC Sense 3.5 based smartphones. Apart from social network apps, HTC has also included a video editing app.

For the best utilisation of the handset, the Rhyme has the Usage Monitor app that shows usage of mobile data, minutes and messages. Besides, there’s a power mode option that allows the user to set specific settings that will make the device run longer than on the regular or custom settings. Endomodo app uses the ANT+ sensor radio integration to help the user keep track of his/her fitness regime.

HTC has pre-loaded a lot applications ranging from health to productivity. However, there is no File Explorer app even with the Sense 3.5 UI update. In terms of software, HTC Rhyme is pretty much ready to use package out of the box. Only thing missing out is the video chat function.
###PAGE###
###LONGSUBSTART### Performance and Multimedia

The Rhyme has a 5 megapixel camera at the back works amazingly well in all kinds of luminance environments. HTC has optimised the camera app interface with the new Sense UI and offers several customisations for the user to get the desired result. However, these features are quite nascent for instance the Panorama mode can accommodate stitching only three images together.

Rhyme also offers couple of filters and effects to make the photos look hep and fun. The Flash is pretty strong for it gives good results even in dark or low-light conditions. Video recording at 720p HD with 24 frames per seconds might stutter a bit but then you can always trim the videos with TrimIt app. Just check out the camcorder app and you shall get all the necessary options.

HTC has been bullish about its music and movie playback on the Android-based devices and this handset leaves the tongue in the cheek. While the previous generation video players were able to handle and process the HTC Surround 5.1 sound quite handsomely, the one in Rhyme seems to be facing some issue. Of course the support for .avi files with XviD codec certainly makes up for that with SRS enhancements. 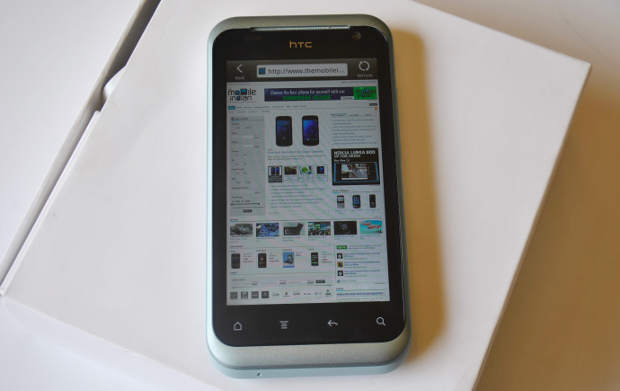 Music listening is a quite a decent experience as the lock screen widget also supports managing the tracks &#151 jumping forward or back. Unfortunately the bundled earphones are bit tacky for the audiophiles and even the speaker at the back is not as loud as other HTC smartphones.

The Fast Boot mode in settings helps the handset to boot up faster than any other handset. Also the power mode options makes it quite smart package along with the Social Network apps. HTC Rhymes seems to perform well even with the single core processor and 768 MB RAM only.
###PAGE###
###LONGSUBSTART### Battery Life

HTC has packed a good 1600 mAh non-removable battery in the Rhyme. With a normal usage involving two hour of voice calls, watching couple of videos, checking email, and staying connected on social network made the phone last just above a day and a half. In the normal usage, the Auto-sync was checked off and GPS was used only when required. Even with the continuous video and music playback, the phone lasted for almost eight hours.

As usual, the battery drain was faster when used continuously over WiFi and GPS was left on for accurate location. It was indeed surprising to see that Rhyme puts other monstrous HTC’s high-end handsets to shame on grounds of battery usage. Then again, we must not forget about the hardware packed inside the Rhyme.
###PAGE###
###LONGSUBSTART### Conclusion

HTC Rhyme looks beautiful and offers fresh user interface taste. It not only appeals physically but also even in terms of UI to the femme fatales who wish to click photos quickly and stay connected with their friends online. Packing a good camera, the HTC Rhyme would be a perfect smartphone for a higher mid-range segment. HTC Rhyme was launched at an MRP of Rs 29,990 but now retails for as around Rs 28,500 in the market. However, it is available for purchase at Rs 26,000 roughly from reputed online retailers. HTC Rhyme competes closely with the touchscreen smartphones like Sony Ericsson Xperia Arc, Sony Ericsson Xperia Pro, HTC Incredible S and HTC Radar.

Packed with majority modern day feature and the new version of HTC Sense will keep the users connected by adhering to the status quo. With no fault of HTC, the Rhyme arrives at a tough time where dual-core mobile processor, large touchscreen displays and better camera sensor bearing handsets are available in the market. The price of this handset is bit steeper than what one could expect because of the Indian Rupee value dip against the dollar. The handset would sell like hot-cakes if it was slotted anywhere between Rs 17,500 to Rs 20,000 approximately.

Clearly, this smartphone is meant for the delicate beings that are not into the dual-core processor or beefed up hardware admiration.