As the smaller incarnation of the HTC One, the One mini offers a crisp display, smooth performance and premium build quality.

When HTC introduced the HTC One smartphone with aluminum unibody it was loved so much all over the globe that the company planned some spin-off devices based on the HTC One reference design. It is really not easy to pull-off the same design to create another aluminum unibody bearing smartphone. That is why HTC chose to use polycarbonate to bring the HTC One mini. 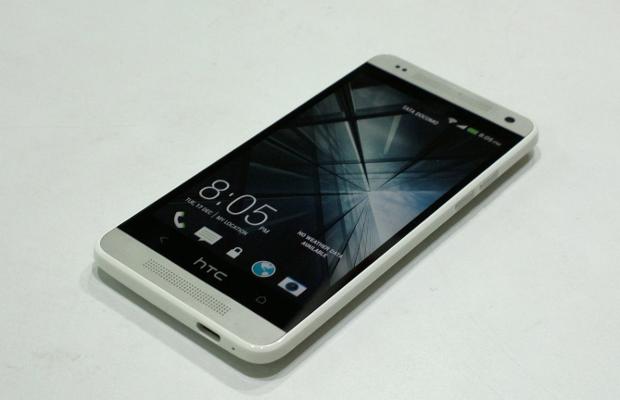 HTC One mini carries the same design language and styling as the HTC One. Of course, the One mini is a stripped-down younger kin of the One, but with apt hardware. When the device design shrinks, the battery takes the major hit and thus expectations are lowered.

We got our hands on the HTC One mini handset and quickly put it to test to know the best about it.

HTC has smartly followed the clean looking and palm-friend design of the HTC One smartphone to implement the same in the One mini. In a way, One mini does look like an offspring of the HTC One. HTC has tried to put as much metal as possible in this small yet powerful package. The premium aluminum chassis components connect the One mini to One. 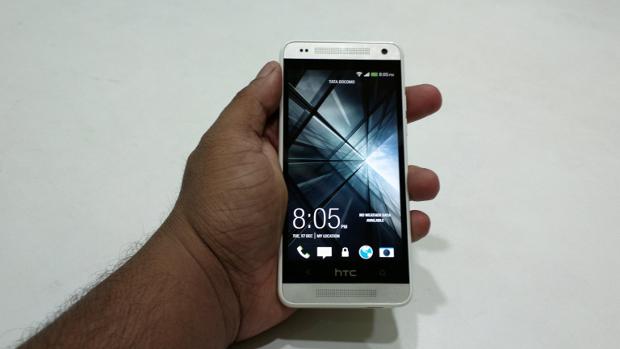 HTC One mini has aluminum strips above and below the display, forming the bezel. These strips have a mesh of very tiny holes for the stereo speakers that support HTC BoomSound. The non-removable back panel is made of the same aluminum to give a premium cold feel to the palms. However, there is a plastic strip running along the sides connecting the front panel to the back. Samsung Galaxy S4 mini is exactly opposite - it has a metal strip running along the sides, connecting the polycarbonate front and back panels.

When One mini is held, the phone's edge gives a feel of smooth plastic while the back panel gives a metallic feeling. Undoubtedly, the One mini is the one of the best looking smartphones in the market. Clad like the One, One mini is superbly comfortable to hold in a single hand and operate easily.

HTC has sized down the specifications of the HTC One to fit the small and comfortable size of the One mini. One mini flaunts a 4.3 inch Super LCD 2 display constructed using Corning Gorilla Glass technology. The display packs 1280 x 720 pixel resolution, thereby making it very crisp and quite responsive to touch gestures. Compared to the Samsung Galaxy S4 mini, the HTC One mini certainly has a crisper and better looking display. By default, the 720p HD display support, pushing 342 pixels per inch pixel density, does make it one of the more pleasing displays to use.

Inside the aluminum chassis, HTC has housed a dual core 1.4 GHz Qualcomm Snapdragon 400 mobile chipset with Adreno 305 GPU and 1 GB RAM. This hardware is good enough to drive the 4.3 inch display. Also this is a decent step down from the Qualcomm Snapdragon 600 used in the One. The 1 GB RAM comes in handy while using the Android 4.2.2 Jelly Bean update and some heavy games or apps. 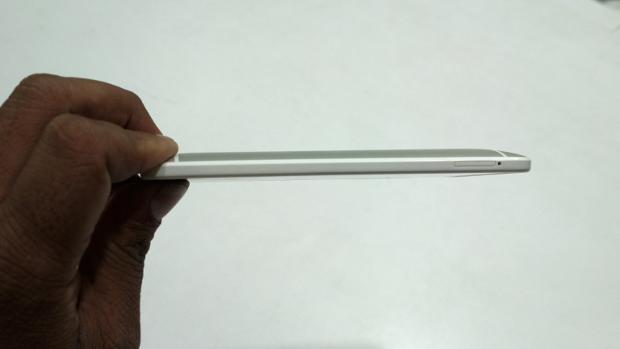 HTC One mini carries the same demerit as the HTC One-lack of expandable storage. So there is no way one can physically add a microSD card. On the left side of the phone there is a small hole to eject the micro SIM tray. The micro USB 2.0 port rests at the bottom for charging as well as data transfer while the standard audio port is on the top to hook up any pair of earphones. The front facing dual stereo speaker mesh will always remind of the HTC One but the plastic edges along the sides reminds us that it is indeed the One mini.

At the rear is a 4 megapixel HTC UltraPixel camera with sensor size of 1/3 inches and bearing a dedicated HTC ImageSense 2 chip. The image sensor carries f2.0 aperture and a 28 mm lens to capture decent quality images and record video. There is a 1.6 megapixel front camera for video chats.

HTC has packed competitive hardware that will easily make the One mini be slotted in the higher mid-tier for a while.

The One mini is offered with Android 4.2.2 Jelly Bean, with a layer of HTC Sense 5.0 user interface on it. There are hardly any notable improvements in the Sense UI when compared to the HTC One. The BlinkFeed feature refreshes as selected to show snippets of information from a variety of sources from the web and social network updates. Honestly, we like this version of Sense update more than previous generation Sense versions. However, HTC still needs to implement a couple of options: one of them is the capability to disable BlinkFeed. Like other HTC phones, even the One mini comes with an offer of 23 GB worth of free storage for two years. This offer is available only for HTC One series devices.

HTC offers a couple of interesting apps out of the box and preloaded on the One mini. Soundhound, TuneIn Radio, and 7 Digital are three music centric apps that come pre-loaded. Other utilities include the kid mode powered by Zoodles to lock down access for kids to certain areas of the phone such as contacts or the internet. HTC also packs productivity apps such as Polaris Office, Notes, Tasks and PDF Viewer along with the FM radio and Flashlight apps. 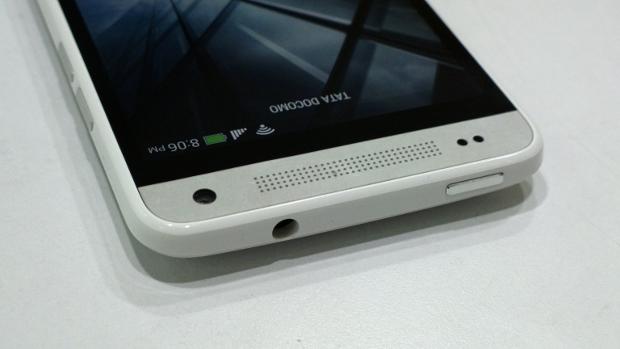 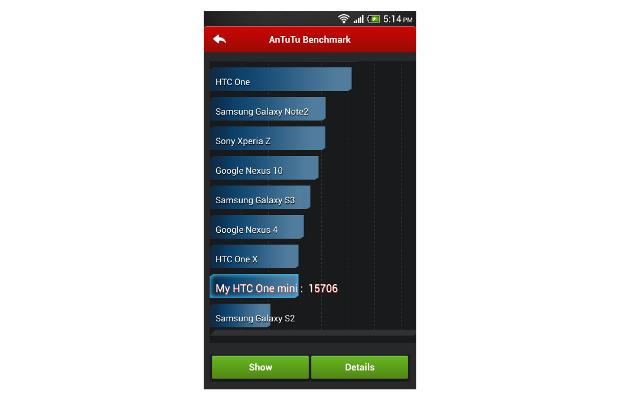 HTC Sense does feel sleek and smooth with a new interface lift. The Quick Settings option in the Navigation tray makes it very easy to toggle essential settings with minimal taps: Like the screenshot option. 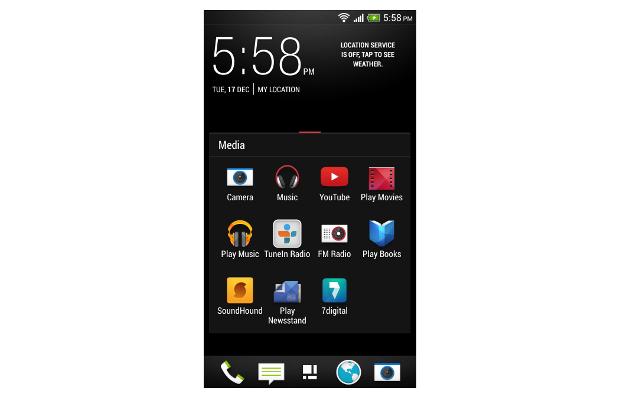 HTC has just started pushing out the Android 4.3 Jelly Bean update for One mini in select regions, but we did not see the update at the time of testing this device.

As usual, there is no separate native video player for the device. By default, the HTC Zoe trotting Gallery app can playback the videos once loaded on the device. However, we were pleased with the decent audio and video quality of the Gallery app's video playback. 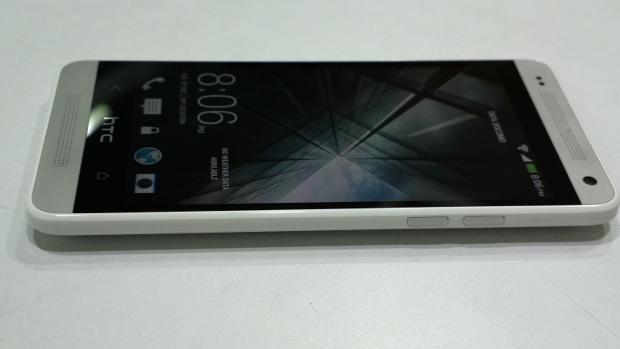 HTC has packed an UltraPixel camera that aims to deliver sharper and better images, to step out of the megapixel race. Looking at image quality, we believe that the images do need some really essential tweaking when shot in low light. However, at times the colours and overall image quality did appear somewhat washed out even in good light. The lack of optical image stabilization to click good quality images in low light is certainly missed. The camera is capable of capturing full 1080p HD video and we had acceptable video. 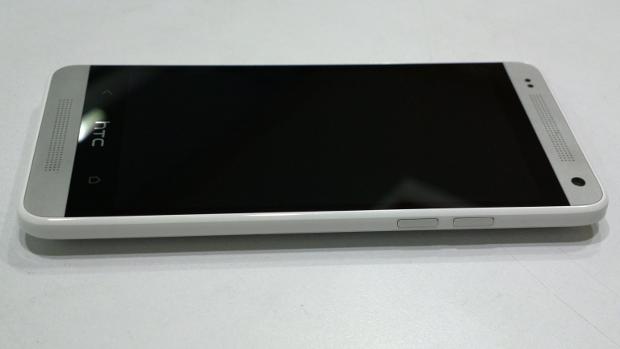 The One mini packs GPS supports along with A-GPS and GLONASS for better location services. While using Google Maps, we noticed that the location was locked in about fifteen seconds. We tested this capability over WiFi networks in buildings and the open road over mobile network. Of course, it was faster over WiFi but hardly slower over mobile network.

The audio-video support was fair and decent. However, we felt that the audio quality could have been louder and clearer.

HTC has packed a dual core processor and paired an 1800 mAh battery to power the handset. One of the pitfalls is that the battery is not removable. After a full charge, we noticed that the Android system continued to leech more battery than the WiFi network. With normal calling, texting and social network usage the phone managed to last through just about a day on 2G network. HTC promises talk time of about 13.3 hours over 3G and the phone managed barely 7 hours with continuous usage. Battery-life is not the best in the segment, so users will certainly have to invest in decent portable power banks for charging the One mini in case the battery gets drained in an emergency.

HTC had introduced the One mini at Rs 36,790 market operating price and it can be purchased for around Rs 33,000 in India. The unfortunate part is that Samsung Galaxy S4 and Google Nexus 5 are available at the same price with better displays, hardware, battery and overall performance. So if the HTC One mini has to stand against Galaxy S4 as an overall package, there will be no second thoughts. HTC One mini is the alluring combination of good design, pleasing display and fairly decent hardware. However, it does miss out on a removable and low capacity battery - one of the crucial components for a smartphone. If the phone's price is adjusted to about Rs 25,000 then it would give fair competition to the LG Nexus 4 and other age-old devices. Honestly, the One mini is a really compact device and probably one of the last of its kind. Since HTC has already replaced the HTC One with a dual SIM edition having a removable back, consumers might be anticipating the same with One mini. Unfortunately, that is not going to happen. HTC had added 4G LTE network support and the phone supports the LTE band used for India. The One mini is a perfect choice for those looking for a smooth performance device that can be operated with one thumb of the palm holding it.