Premium finish HTC Desire X is a mid-range device that is meant for all round casual usage sans any video recording. 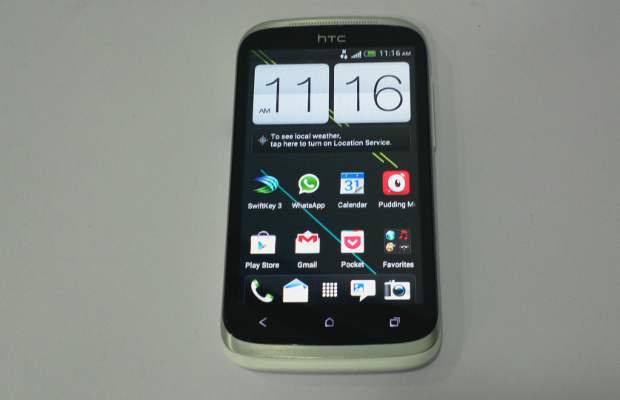 The design of HTC’s Desire X has been inspired by the HTC One X smartphone, and the device is packed with enough hardware to deliver suitable performance. Desire X is meant for customers on a slightly higher mid-range budget. Here is our account of the brief time we spent with the Desire X.

HTC’s Desire X takes design inspiration collectively from the HTC One X and other Desire series devices. It features a nice 4 inch Super LCD display with rounded corners and has a plastic back cover with matte finish. Between the plastic back cover and the screen is an aluminium bezel strip running around the screen. 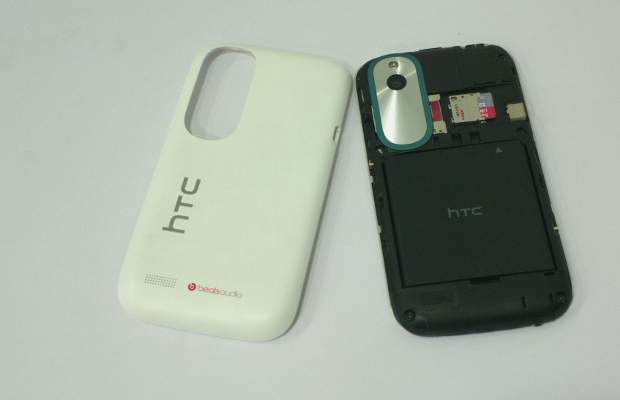 HTC has placed the power/sleep/unlock button on the top center and to its left is the 3.5 mm audio port. The volume control keys are located on the right of the phone. There is no dedicated camera button and the micro USB port for charging is on the left side. 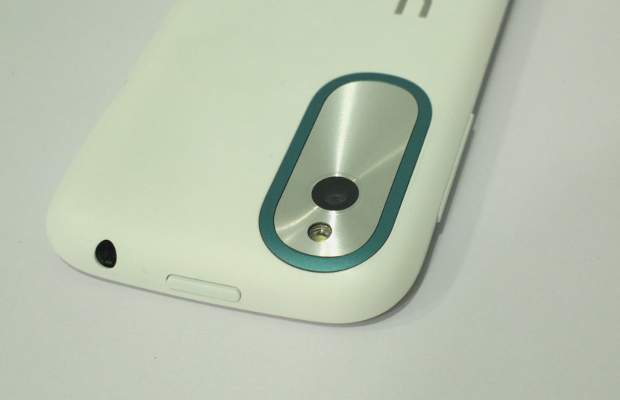 The Desire X stays quite comfortably in the hands and the matte finish provides some grip. Desire X is a nice phone to hold but it does have some biting issues. For instance, the back panel of the Desire X is a hair-tearing expedition to open. There is no latch, button or crevice to hint at where the back panel opens. Basically, you have to push the white back panel hard to detach it. One certainly needs to be careful with the back panel, which picks up dents and scratches quickly.

Over all, the Desire X is a stylish smartphone with a nice back panel and pleasing grip that leaves a premium finish feel to the hands.

HTC has used a 4 inch Super LCD touchscreen display that is big enough for reading the text comfortably and also for enjoying multimedia content. The Super LCD display offers pixel density of about 233 pixels per inch and carries 480 x 800 pixel resolution natively. Of course it supports multi-touch, but it has not been constructed using Gorilla Glass or similar technology so it is prone to scratches and fingerprints. The screen quality is quite similar to the one appearing on the Desire V, but there are certain differences between the two. The Desire X has the S LCD display that does not offer extremely bright screen when the brightness setting is set to full. The native contrast is quite good and the text is legible even in bright sunlight.

Inside the 9.7 mm thick body, the Desire X packs a dual core 1 GHz Qualcomm Snapdragon S4 Play MSM8225 mobile processor and packs Adreno 203 graphics. This smartphone has 768 MB RAM to power the Android 4.0.4 Ice Cream Sandwich update layered with HTC Sense 4.0 user interface. The Snapdragon S4 Play family mobile processor is based on an ARM Cortex A5 design, consumes low power, and can be clocked only to 1.2 GHz. For those who get blinded by the term ‘dual core’, do look out for more on the graphics side in the multimedia section below. 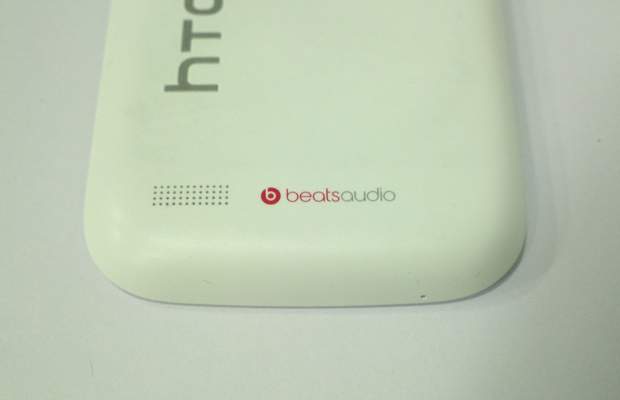 HTC has also packed a 5 megapixel camera at the back with an LED flash above the image sensor. This camera is capable of clicking decent quality images, but records video only in 854 x 400 pixel resolution. Thus the phone does not offer 720p HD video recording as compared to rival models such as Galaxy S Advance. The network chip supports dual band 3G networks and also offers WiFi (802.11 b/g/n) along with the ability to create mobile hotspots. HTC has included a GPS module with A-GPS support. 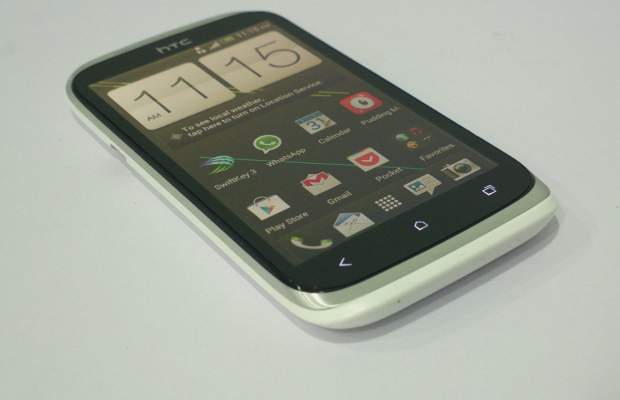 The hardware chosen by HTC is decent enough for a mid-range device, but a better processor and graphics could have given a little extra muscle to the package.

Desire X features a 5 megapixel camera at the back with an LED flash on top. Indeed, the placement of the LED flash appeared a bit off to us as well, but then we hoped for enough light during low luminance shoots. The camera app has been tweaked to be immensely responsive and sleek. The app offers a wide range of options to manipulate them for capturing an image in the way you want it. HTC has added fifteen image filter effects in the camera app itself so that users can check out the image filters and the effect they create in real-time. On the left side is the adjustment bar to expand or contract the center of the focus. Apart from that there are eight different camera modes – HDR, Panorama, Portrait, Group Portrait, Landscape, Whiteboard, Close up and Low Light, offered so that the users can engage them quickly without having to fiddle around the settings.

The camera app also offers the option to adjust white balance, ISO settings, image adjustments and several other settings to keep shutterbugs happy. The only pain lies in the absence of a dedicated camera button and one has to limit it by clicking the virtual camera button on the screen. 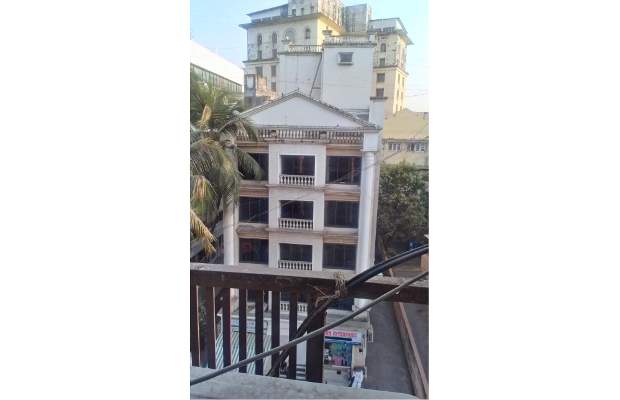 The image quality offers low noise loaded photos, but there are no fine details in it. Colour display could have been better, but in the end these photos are decent enough for sharing over social networks.

HTC has integrated Beats Audio in the phone’s hardware to offer better audio output. Unlike last year’s Beats Audio devices, the Desire X also enables the same with third party earphones. Sound quality over the headphones is quite nice. However, we found the speaker was feeble compared to the other Beats Audio integrated devices. There is also a built-in FM radio app, which requires the bundled headset to work as an antenna, and also brings Soundhound integration to find more details about the song being played on-air. HTC has not integrated a Near Field Communication chip inside.

Applications and other elements 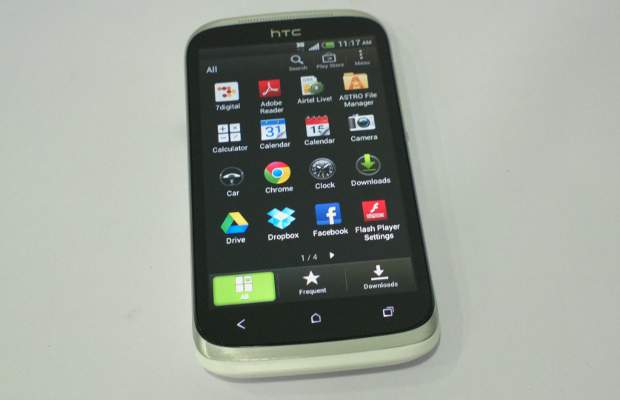 HTC also added the Transfer app that allows the user to easily transfer the contacts and other data from any other phone to Desire X. In case the device gives issues there is a Rescue app that lets the technician connect remotely and repair your device. Other handy apps include Tasks, and you should be ready to get confused between HTC’s Calendar App and the Google Calendar App, for both will co-exist to bother you equally.

Though this is a mid-range device and we expected a 1300 mAh battery, HTC has surprised everyone by using a 1650 mAh removable unit. The term ‘removable’ is important because in future you can upgrade the battery with a high-powered one. Over the 3G network, the Desire X offers run time of just about a day and the next morning it would beep to get charged. 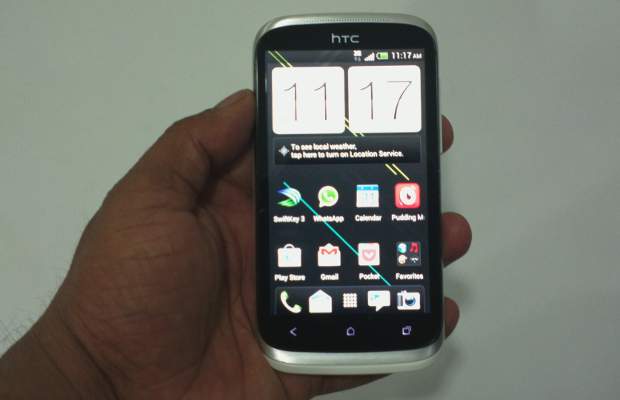 The video playback also showed normal consumption of battery as one can watch two 180 minute movies on a single charge without leaving the WiFi turned on. Unfortunately, the chip neither records nor supports playback of 720p HD content so you will be limited to lesser resolutions.

HTC Desire X is a smooth, routine performance smartphone with fair battery life of just about a day. For a mid-range device, it does a great job of handling the operating system and other activities quite smoothly. Desire X is priced at Rs 18,850 approximately, and can be purchased for less. When compared to rival mid-range devices, the Desire X does look a bit over priced. One of the features missing is 720p HD video recording and smoother playback. 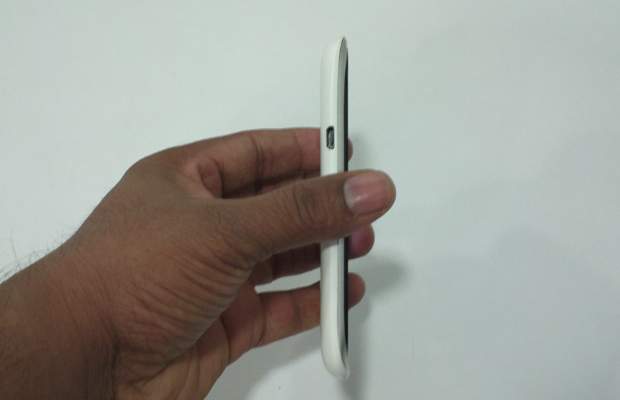 Packing decent battery life, Desire X is the perfect device if you want to move around clicking pictures, listening to music and chatting with your friends over WhatsApp or Gtalk. Desire X may appear a little costly so you can wait for deals or discount coupons. It is a premium finish HTC device that will spoil you with the Sense 4.0 UI and other features.