Mivi Duopods F30 are one of the latest TWS earbuds coming in at a budget price of Rs 1,199. The Duopods F30 have 42 hour battery life with the case. 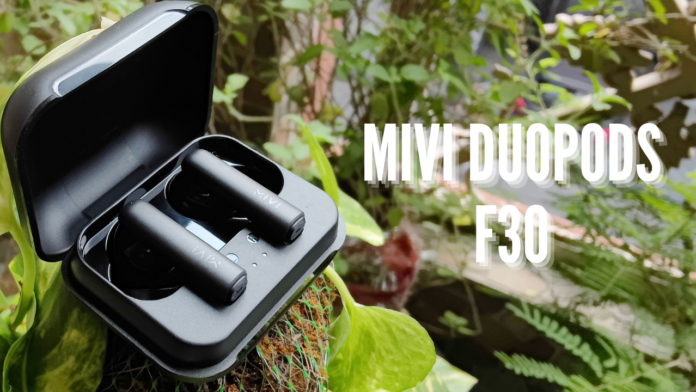 Mivi, a renowned India based company known to specialize in Audio production, recently came up with its Duopods F30. Priced at Rs 1,199, these Mivi TWS earbuds are aimed at the budget segment with features like Bluetooth 5.0 and a battery life of up to 42 hours. Putting them up to the test, let’s see how the Mivi Duopods F30 perform during our review of the same:

The Duopods F30 design lies along the lines of Airpods from Apple. The buds have a stem design with touch controls and a single LED light that turns red and white. Though everything is made from plastic, Mivi provides a matte finish outside the buds to give it a premium feel.

You get rubber ear tips on each earbud, and with a design such as this, the Duopods F30 fit in the ear comfortably. In addition, they create a good amount of seal when in the ear to block ambient noises. As a result, the earbuds sit in your ear with a good level of comfort. They won’t fall out very easily even while you work out. The touch controls on each earbud worked fine without any problems. You can single tap for pause and double-tap on either bud to change tracks.

Fortunately, you also get volume controls meaning you can tap and hold on the right earbud to increase the volume and on the left to decrease. A triple tap triggers the desired assistant on your device for hands-free operations. The earbuds are IPX4 rated as well for sweat and water resistance.

Coming to the case in which the Duopods F30 sit and charge, disappointing is the word I can think of. The case feels cheap and the lid of the case makes all kinds of creaking noises. It feels loose and easily closes on its own. There’s a Mivi branding on the top of the lid with a Type-C port at the rear for charging. Inside the case, the Duopods sit parallel to each other with left & right indication and four LEDs to depict the charge state of the case.

These Mivi earbuds are equipped with 10mm dynamic drivers on which the audio quality relies. Furthermore, there’s a 10m operation range achieved with the help of Bluetooth v5.0. The audio quality on these earbuds is average in my opinion. It has a rightward slanting sound, meaning the highs often overshadow mids and lows, especially during EDM music.

Yes, there’s a decent amount of bass but such a sound signature makes the sound a bit muffled at times. Even the lyrics became hard to recognize at times in songs such as ‘Weird Machine’ by Droeloe. If I had to rate the audio quality, I would give it a 5.5/10.

The call quality was surprisingly good. There were no sorts of disturbances. However, the other person could hear a slight echo of my voice. Background noise was suppressed to a decent level but wasn’t diminished completely. My voice was clear on the other end and the same was the case on this side as well.

Battery Backup is the main USP of the Mivi Duopods F30. Mivi has claimed 42-hour battery life, of course including with the carrying case. On a single charge, you should easily be able to get more than 6 – 7 hours of playback time at about 60 – 70% volume.

Load more
Mivi Duopods F30 ReviewMivi Duopods F30 are super when it comes to battery life and do certainly well during calls as well. As far as build and audio quality is concerned they need further improvements as the competition is heating up.