Honor 9i Review: Four cameras and FullView display are the stars of the show! 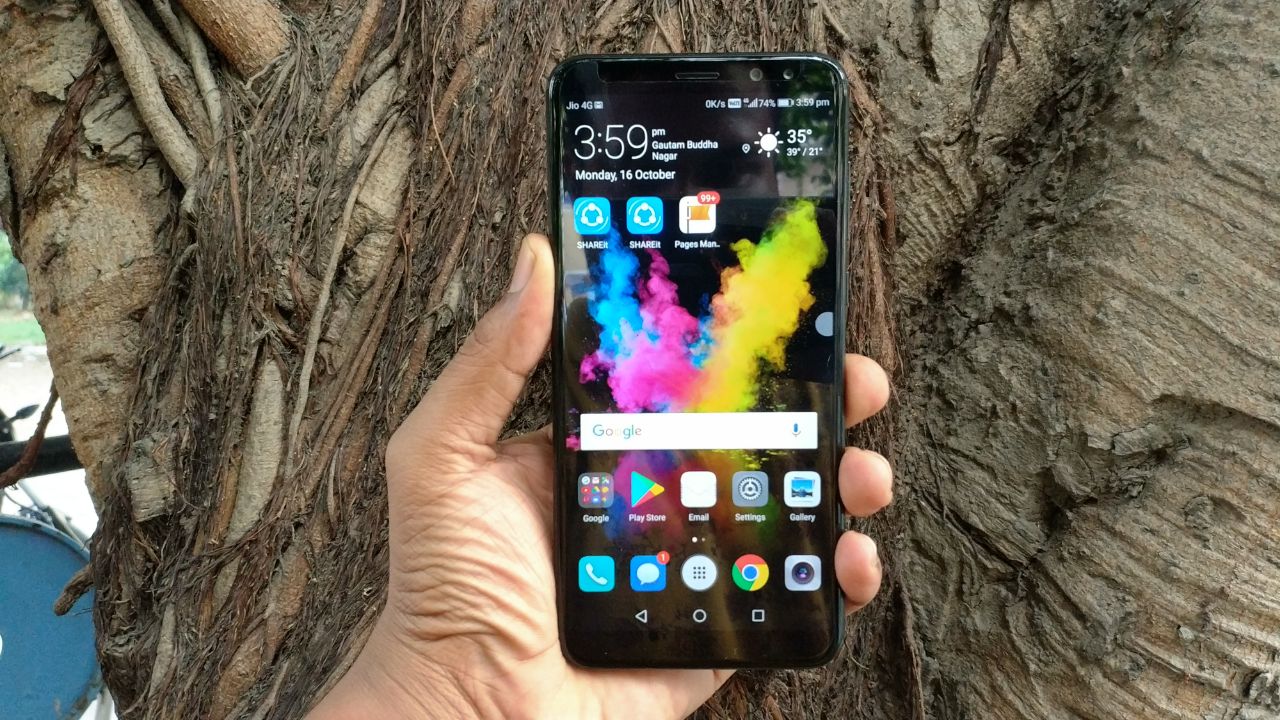 Is it really worth your every penny? Let’s take a closer look.

The bezel-less display and an unusual aspect ratio of 18:9 is now becoming a rage in the smartphone industry with different manufacturers trying their level best to adapt to this new technology. Huawei’s sub-brand Honor is yet another one that has gone with the latest display norm with the launch of Honor 9i with some interesting and noticeable twist. The smartphone comes with a price tag of Rs 17,999 and it is exclusively available from Flipkart starting from today onwards.

It is safe to say that this is the first smartphone which not only an 18:9 aspect ratio but also boasts quad-camera setup. Coupled this with some really interesting specs sheet and a sleek design, the Honor 9i seems is projected to be a perfect option for those who are looking to buy a new smartphone with the latest display and upgraded camera without spending tons of money on it. But, is it really worth your every penny? Let’s take a closer look.

If you are one of those who fancy huge display but doesn’t want a big smartphone, then this one is meant for you. The smartphone comes loaded with a pretty compact form factor of a 5.5-inch phone in spite of sporting a 5.9-inch display. The phone comes with some minimal bezels all around, which gives a pretty immersive look. Another interesting thing about the device is sleek design. The Honor 9i is just 7.5mm thick and weighs 164 grams, which makes it pretty sleek option available in the market. 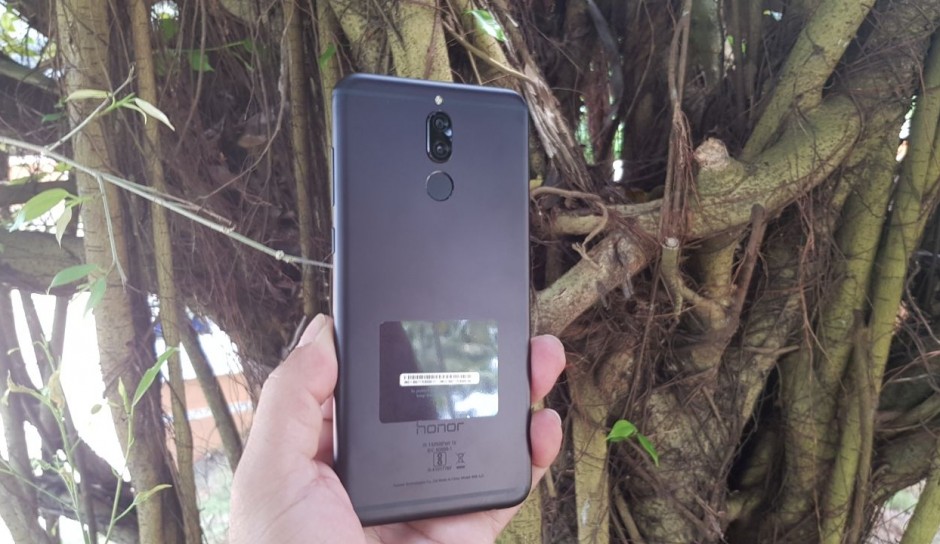 The Honor 9i has curved sides, which makes it easier to hold the device and the metal unibody gives a premium feel. We got the black unit for review and matte finish at the back panel looks pretty beautiful, though it is a fingerprint magnet. Honor gives a transparent case with the device as well, which is a welcome move. That said, the smartphone does give some good looks, though some might find it a bit slippery in nature. Also, the position of the fingerprint sensor could be lower as one has to stretch his/her finger to reach the sensors.

Coming to the display, which is also the major highlight of the device, the Honor 9i sports a 5.9-inch FullView Full HD+ display with a screen resolution of 2160 x 1080 pixels. The display comes with an aspect ratio of 18:9, which is now becoming a new trend in the smartphone industry. The display offers some good viewing angles and colour output is up to the mark. We played different games and watched various videos on this device and we were quite impressed with the performance of the display. The outdoor visibility is not that great, but for indoor conditions, it does a pretty good job. 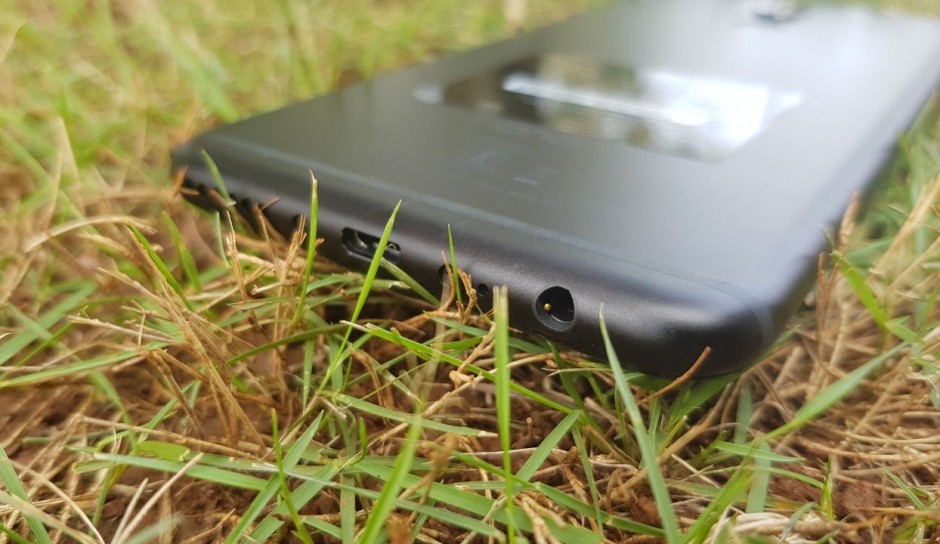 On the downside, the display is not meant for one-handed usage as the top corners are hard to reach. However, the company gives an option to shrink the screen with a simple swipe across the navigation buttons, but still most of the time you require two hands for a comfortable usage. Another problem we encounter was the fact that apps are not optimized for such kind of aspect ratio. In most apps you get to see a black space at the bottom, which kind of spoils the mood. Thankfully, Honor has added an option to rescale the apps to fit the screen, but in some cases, the app is stretched and you get zoomed in view with sides getting cropped. We hope in coming days more apps will be optimized to utilise such kind of displays.

The biggest feature of the Honor 9i are the four cameras. The smartphone comes loaded with a 16-megapixel camera with dual-tone LED flash and a secondary 2-megapixel shooter. For the front, there is 13-megapixel sensor along with a 2-megapixel shooter. However, this is not the first device that sports quad-camera setup. InFocus was the first to launch four cameras with the launch of Snap 4 smartphone. That said, the camera UI is pretty clean and easy to use. The home screen comes with shutter button at the base, while at the top, you get flash mode, aperture mode, portrait mode and Moving pictures. You can swipe right from the default screen to open different modes like Pro photo, HDR, Panorama, Light painting, time lapse, slow-mo, effects and more. A simple swipe left from the screen will open the setting menus. 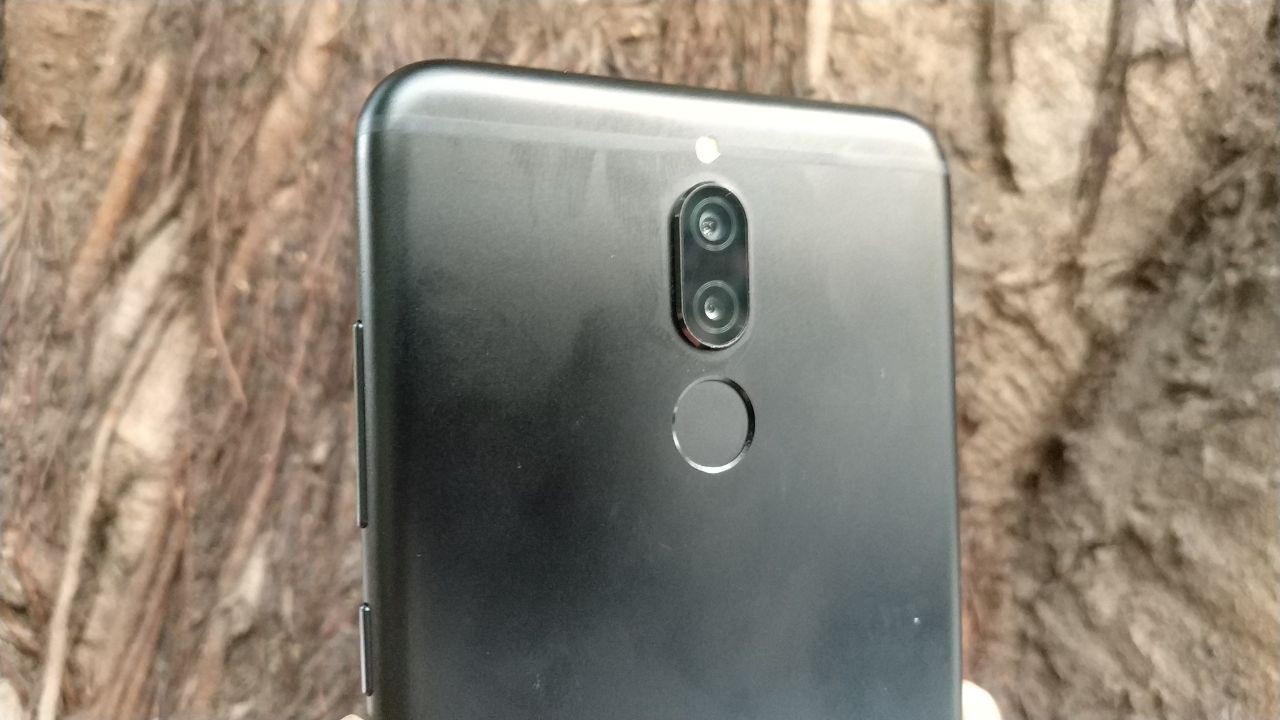 Coming to the performance of the device, the rear cameras do a decent job in capturing photos under broad daylight. You get a decent amount of detail in photos and the secondary camera helps in creating a bokeh effect, though most of it is software induced. The phone does a decent job during low light conditions as well, though we felt that in some cases there were lack detailing and photos came to be a bit grainy in nature. The front camera, on the other hand, does a good job in capturing some good photos. There is a beautification mode as well, which smoothens the skin and the portrait mode does a better job as compared to the rear cameras.

Honor 9i is powered by a 2.36 GHz Octa-core Kirin 659 processor coupled with 4GB RAM. The smartphone has a 64GB internal memory and has an expandable memory up to 256GB with microSD. There is a 3340 mAh battery in this phone and on the connectivity front, it supports Hybrid Dual SIM, 4G LTE with VoLTE, WiFi (802.11 b/g/n), Bluetooth 4.2, GPS/A-GPS, NFC. The Kirin 659 processor used here is comparable to Qualcomm Snapdragon 630 processor in terms of performance. 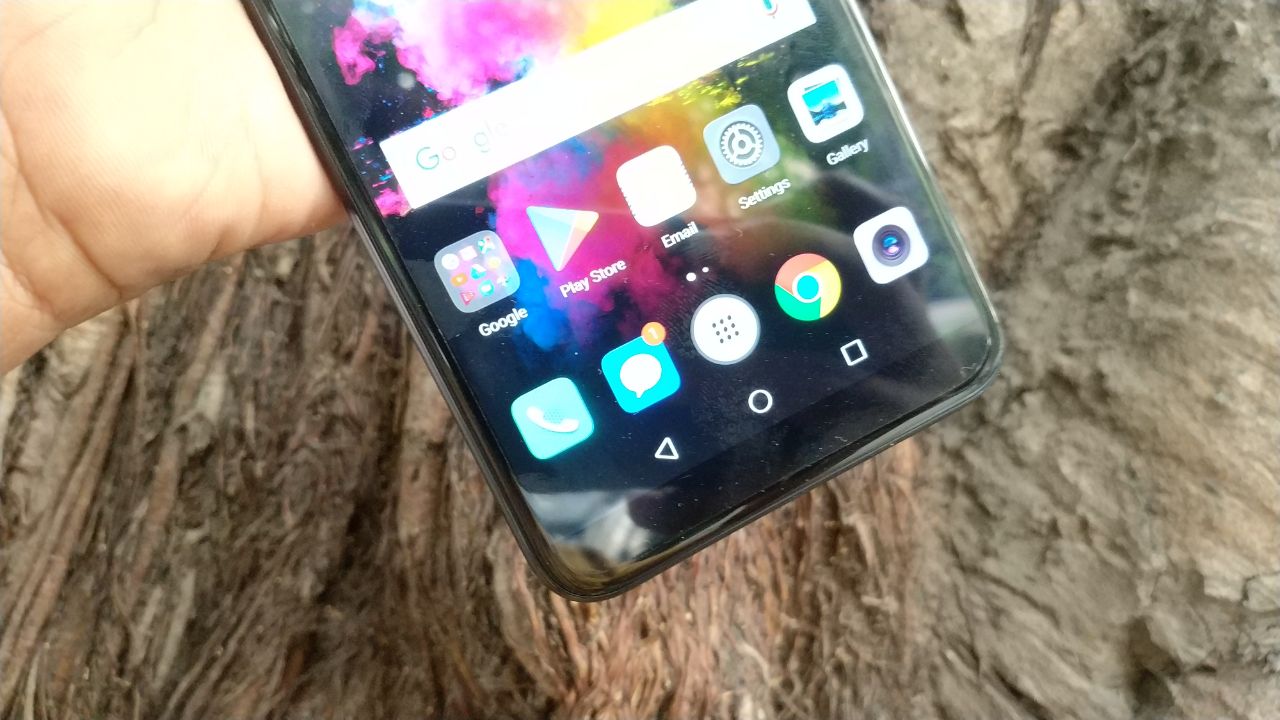 The smartphone can handle almost all the tasks you throw at it, all thanks to the combination of 4GB of RAM and new processor. We faced no issue under normal usage and multi-tasking was smooth as well. On the gaming front, the phone handles most of the casual gaming like Age of Ottoman, Flippy Knife and more without any hiccups and when it comes to graphic-intense games like Asphalt 8: Airborne, Warhammer 40,000: Freeblade, it does not disappoint either.

The Honor 9i battery manages to last a day of normal usage, while under power usage, the phone manages to last more than half a day. One can also stretch the backup of the smartphone using power saving mode and ultra-power saving mode. Interestingly, EMUI 5.1 also gives an option to close power-intensive apps to prolong the battery performance and one can also lower the resolution to save more battery.

Coming to software department, Honor 9i runs on Android 7.0 Nougat with Huawei’s new EMUI 5.1 on top. The EMUI 5.0 is now lighter and faster as compared to previous versions. EMUI has grown over the time and it has one of the best user interface available in the smartphone market. We liked the fact that the company has the option to choose between standard layout and an App drawer. Navigating between the apps and screens in a delight and it is quite smooth as well. One can also change the navigation keys according to their wish. The UI comes loaded with some India-centric feature including a Hindu Calendar, which showcases all the panchangs and dashas. 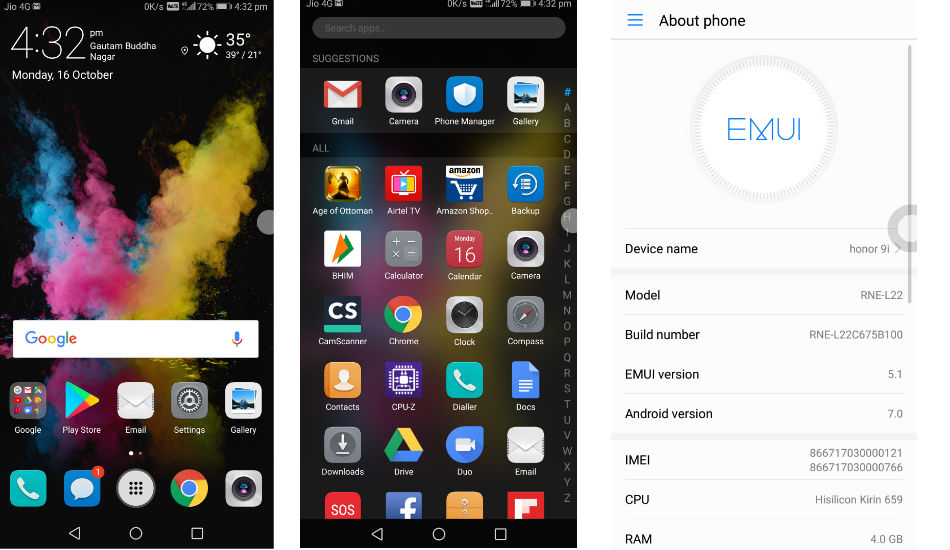 There are also some smart assistance features including floating dock, motion control, one-handed UI, voice control and more. The floating dock is particularly useful for such a large-screen device and it comes with different shortcuts like all navigation controls, lock screen, and cleaner. Then there is App Twin through, which one can setup two different WhatsApp, Facebook and Messenger accounts. One can also change Themes and there is a Phone manager, which is one-stop for cleanup, virus scan, app lock and more. Overall, the EMUI 5.1 works fine with this one.

To conclude, the Honor 9i can be considered as one of the best smartphone available at this price point. The phone offers some sleek design and the display works decently. The camera performance is up to mark and so is the overall performance of the device. Overall, it is surely a value for money and gives a stiff competition to the likes of Motorola Moto G5S Plus, Vivo V7+, and Xiaomi Mi A1.