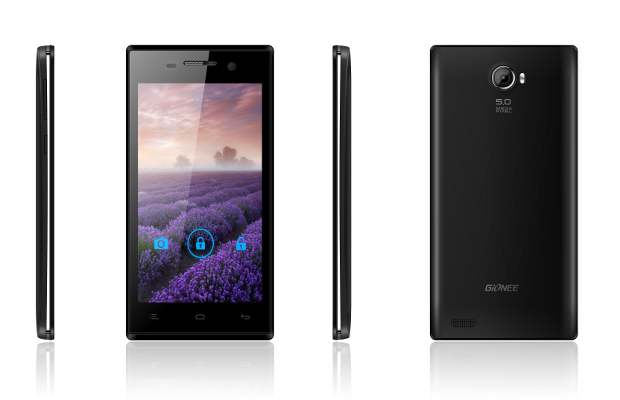 Here is yet another quad core smartphone that is priced at Rs 9,999 and comes with decent features

Chinese vendors obviously have entered the arena as well. One such player is the Gionee which has recently announced its Ctrl V4 smartphone for just Rs 9999. So is it a cheap Android smartphone or has it anything good about it? Let’s finds out.

The Gionee Ctrl V4 is a good looking device that looks more than a regular low cost Android smartphone. The device has a sleek design with glass covering 95 percent of real estate on the front while the back is in black colour with matte finish in order to keep things clean and simple.

The Gionee Ctrl V4 comes in white as well as black colours. The front of the device has a flush finish and the lack of hardware buttons on the front of the Gionee Ctrl V4 gives it a clean look. The device is slim with 9.2 mm thickness and is over all light weight with approximately 150g total weight that includes an 1800 mAh battery pack as well to power this device. 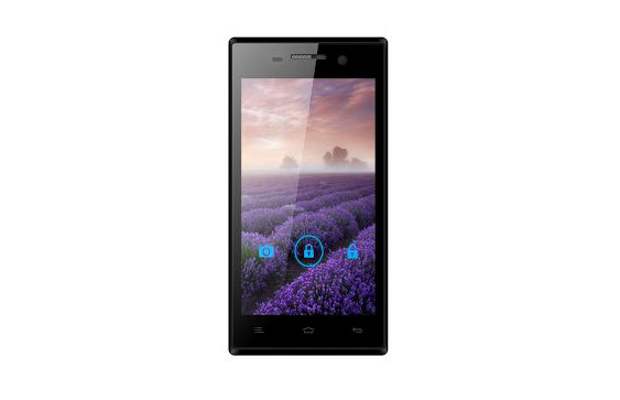 The sidewise placement of the power/standby key really makes it easy to use. The left hand side houses the volume rocker and the Power key as well. Although the right handed placement would have been nice the left side placement combined with a sleek profile works equally well. The top of the device is a bit crammed though as it features the USB/Charge port as well as the audio connector. The bottom of the device has been left clean, although the placement of the USB port there would have been useful.

Overall the build quality of the device if good, it feels sturdy and it can handle accidental falls too. The display is protected by a scratch resistant glass based surface but a scratch guard would be advisable considering it’s a bigger screen and it also promises longevity of the device. For additional protection the company has included a complementary soft case and two scratch guards inside the box.

The 4.5 inch LCD display of Gionee Ctrl V4 has 480 x 854 pixel resolution. The display works great and has great contrast at lower and medium brightness levels. At higher brightness levels, the colour saturation increases and goes out of balance. With maximum brightness, you can use it in outdoors as well. 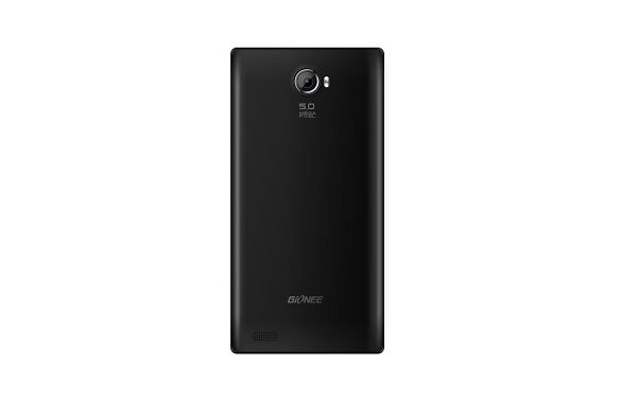 The capacitive touch is great and even the slightest of the gestures translate in to perfect action. The Gionee Ctrl V4’s display supports 5 point capacitive input system allowing users to use apps that require more inputs like First Person Shooter games easily. All in all the touch is great on the device and totally complements the usage.

The colour reproduction and the black levels are good and the picture quality offered by the display is sharp and vibrant provided the brightness is kept in the good threshold. The automatic light sensor works well and controls the display’s brightness offering comfortable viewing all along.

The Gionee Ctrl V4 utilises Mediatek’s 1.2 GHz quad core processor based on ARM A7 architecture and Power VR SGX graphics engine. The processor is the fourth generation chip from Mediatek and is known for its battery saving and 3G connectivity superiority. 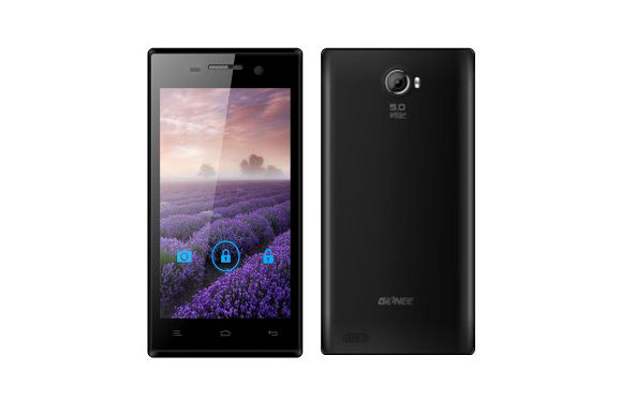 Android’s Jelly Bean 4.2 powered Gionee Ctrl V4 comes with a custom user interface as found in Gionee Elife E3. However, the UI has been tweaked to suit the Ctrl V4’s 512 MB RAM. 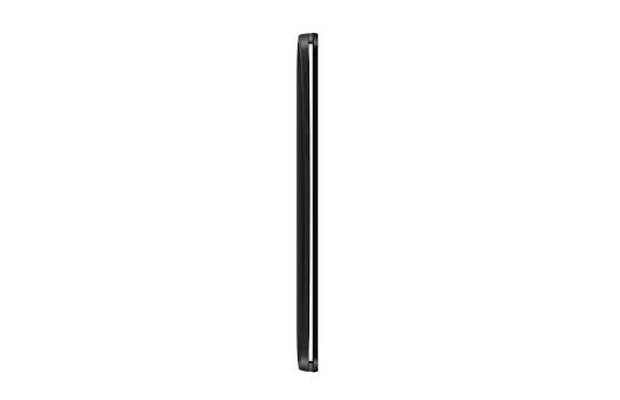 The Gionee Ctrl V4 has a 5 megapixel camera in place of an 8 megapixel unit found in most of the handsets today launched for around Rs 10,000. But even though the resolution is lower, the camera is good and offers great chance for users to go creative too. The camera features an autofocus lens as opposed to a full focus lens offered by most budget device and it certainly adds to the image quality. Along with that the device can record high quality videos as well. The front features a 0.3 megapixel camera good enough for video calling and that’s about it. 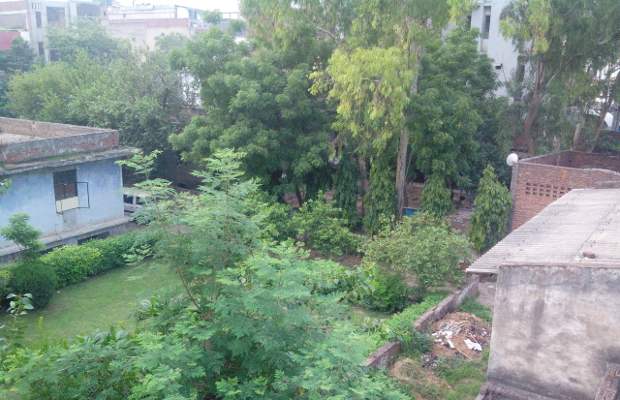 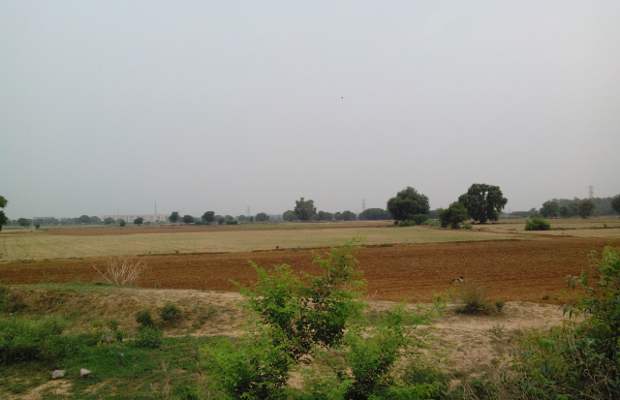 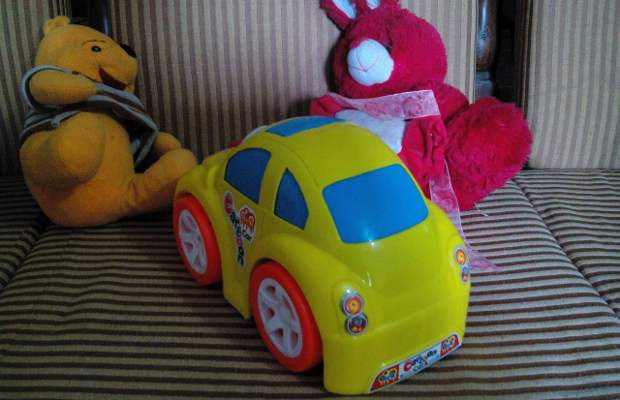 The image quality of the camera is good for the outdoor while indoor mode suffers due to lack of lighting but sufficient light is provided by the LED flash wherever it is needed but is only effective for close objects. The colours are captured nicely with details; the 5 megapixel resolution gives good utility for the pictures as well. 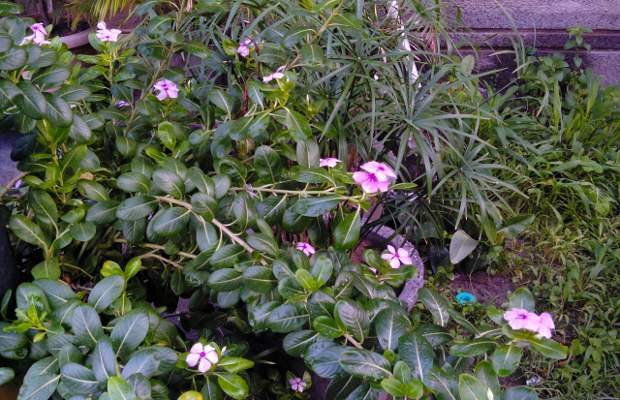 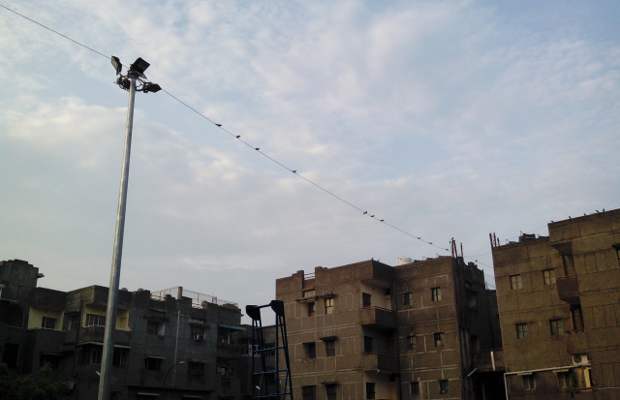 On multimedia front the Gionee Ctrl V4 features support for all generic Android formats as far as audio and video payback goes plus like any other Android device, there’s a plethora of application available on the Google Play store to extend multimedia capabilities. 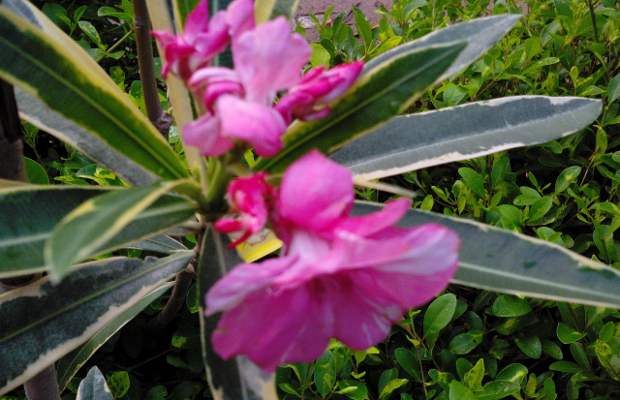 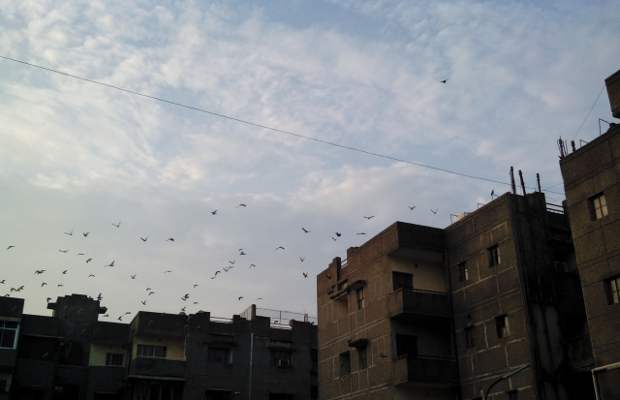 The loudspeaker of the phone is a good one and performs well on most sound levels. The inclusion of the Yamaha sound processor on the device is a great and offers brilliant sound quality which clearly helps the Gionee Ctrl V4 to differentiate form the other low cost device available in the market.

Considering its price, the Gionee Ctrl V4 offers great all round performance for a budget range android smartphone. As mentioned earlier, too many applications open at a same time slows the device a bit but it’s okay for a budget device. During the course of the review the device underwent a lot of application testing and stressing but the device never hung or froze. 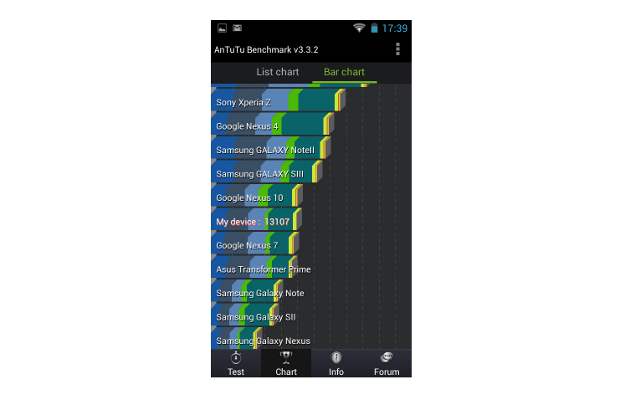 In synthetic benchmarking, the Gionee Ctrl V4 surprised us a bit by offering scores better than the Google Nexus 7 tablet. Although it does not mean that the device is superior, it indicates that it can offer performance if the need be. In Nenamark 2 graphic testing, it scored 48.2 which indicates that it can be a good device for low to mid-level gaming, even 3D ones to an extent. 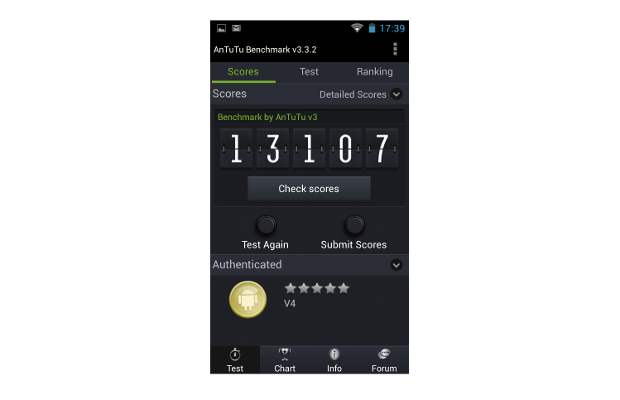 Its 4.5 inch display is a major plus point of this device even the touch sensitivity of the device is very accurate and all the gestures are very accurately registered and translated by the device. The onscreen keypad is nicely designed and spaced out as well, although the sleek profile might make fat fingers a bit uncomfortable. 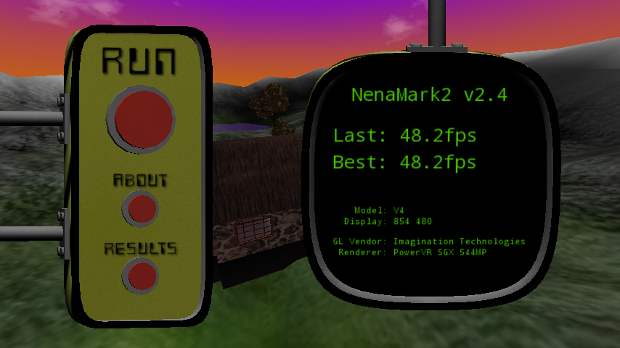 The call performance of this device is also another major plus point for the device. The calls are received and made without any issue. The earpiece and loudspeaker volume is abundant and the microphone also makes sure the receiver gets to hear every world loud and clear. 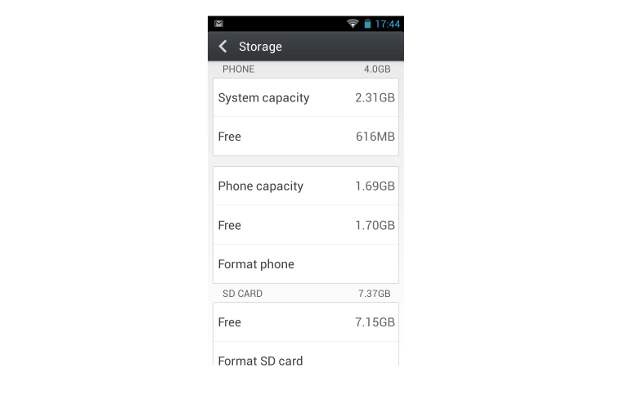 Ctrl V4 has dual SIM of which the primary SIM is meant for 3G connectivity while the later has 2G connectivity only. Utilizing and calling using two SIM’s is not at all an issue and works smoothly.

The Gionee Ctrl V4 comes with an 1800 mAh battery pack that offers good battery backup. While using cellular data and calling the device easily lasts between 1-1.5 days and in the drain test the device managed to play videos for good 5 hours approximately. The Gionee Ctrl V4 takes around 1.5 to 2 hours to get fully charged from scratch. 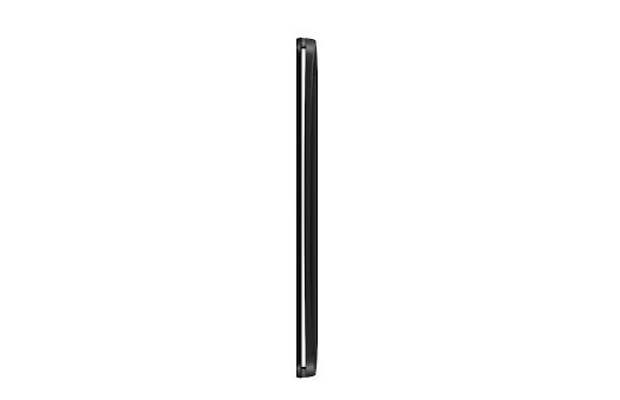 All in all the Gionee Ctrl V4 performs well, looks good and comes in as a budget device as well. The device competes with devices like the Xolo Q700 and has its own share of plusses and minuses. Firstly the device is lightweight than Q700 but at the same time gets a smaller battery, but battery backup is more or less the same. The Gionee Ctrl V4 comes with more storage memory than the Q700 but the Q700 features 1GB RAM.

So ultimately the price of the device is good, the performance is just right and it features a sleek profile and lightweight body that is equally good looking.