It provides an easy way to control or toggle the volume and notification settings of Android device.

Android by far has won over a million hearts. It has got all the elements that make it a super mobile operating system plus it is absolutely free of cost thereby leading to cheaper and a wider range of devices. Plus the open source nature of the operating system allows others even outside the core development team to work upon the Android operating system and make it a better one.

Talking about better things, volume and ringer management on Android is by far the most simple and easier to use – just play with the volume rocker and tweak the volume.

The Volume Rocker bring all the volume and profile related controls from within the device to a single neat looking widget that can be accessed for tweaking the devices’ volume and notification on the fly.

Even though the Android volume and notification control interface is simple and useful but it lacks the much needed preset controls that offer a one touch peace of mind. So at present, if you reduce the voice of the ringer which controls the overall volume level, everything either becomes silent or too loud.

The Volume Rocker provides the older, much appreciated profile based control for the Android devices in which the whole volume settings gamut is involved. Users get an option of five different preset volume settings that have varied volume levels custom made to suit most occasions. So users can very simply select the meetings preset when entering a meeting and it automatically controls the volume levels.

But what differentiates the software is the ability to tweak the setting in between the presets as well. So I can very well choose to silence my ringtone but not my scheduler or reminder alarm which alerts me at the right time. So the individual volume level tweak helps users control the annoying bits while sparing the critical ones which were earlier affected overall.

The application, as mentioned earlier, also is simple and very easy to use plus it is available absolutely free of cost. The application is supported by advertisements which are annoying sometimes but the utility offered is bigger than the annoyance.

The utility is available for all Android 1.6 and above devices. The application can be downloaded from the Android Market or alternatively user can also follow this link to download it also. 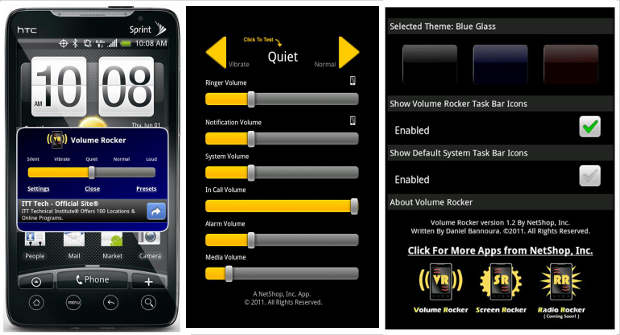