Manu Kumar Jain has revealed this information on his official twitter handle. In addition to this, he has also revealed that Redmi 3s has, in fact, become the highest selling phone ever available in India via the online medium. His tweet reads His tweet reads “#Redmi3S: 4M+ units sold in 9 months Highest selling phone ever in online India I hope our next device is as successful @XiaomiIndia”. 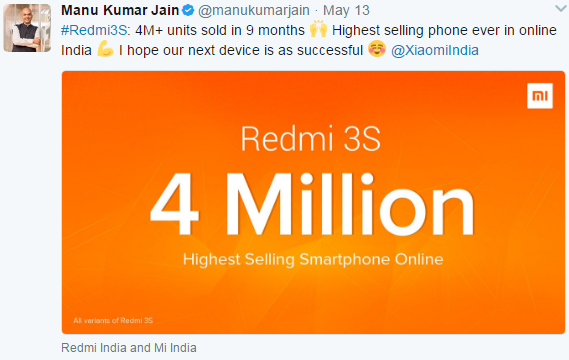 Crafted with a premium metal body, Redmi 3S has a 5-inch HD display. Though it weighs just 144 grams, Redmi 3S comes with a huge 4100 mAh battery which claims to offer two days of battery backed up with moderate usage. Redmi 3S is powered by the octa-core Qualcomm Snapdragon 430 processor, 2 GB RAM and Adreno 505 GPU.

In addition to all the features of Redmi 3S, Redmi 3S Prime comes with a fingerprint sensor with ultra-fast phone unlocking and enhanced security and privacy, as well as 3GB RAM and 32GB storage.