Xiaomi Mi Mix 2 to be unveiled on September 11

The smartphone is likely to sport a 12-megapixel dual camera setup on the rear and a 5-megapixel front-facing camera.

Xiaomi has today officially announced on Chinese micro-blogging website, Weibo that Xiaomi Mi Mix 2 will be unveiled on September 11 in China. The event will be held at the Beijing University of Technology Gymnasium at 2 PM local time.

The company has released a poster teaser on Weibo which reveals that the Mi Mix 2 will be arriving with full screen 2.0 design which indicates that the smartphone might offer a higher screen-to-body ratio of 95 percent, up from 91 percent than the predecessor Mi Mix which was launched in October last year. The poster reveals the phone without bezels on the sides. At the bottom of the poster, the launch date is written along with the name of the smartphone- Mi Mix 2. 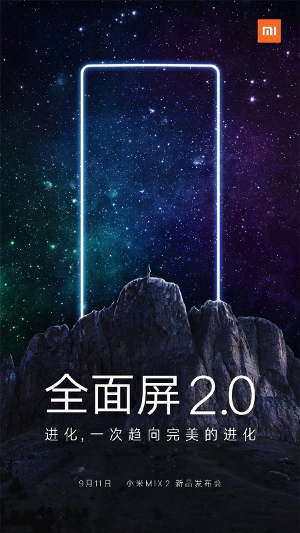 The Xiaomi Mi Mix was made out of metal and ceramic but the Mi Mix 2 is expected to be available in a metallic body instead of a ceramic chassis. The predecessor model came without a regular earpiece for which the Xiaomi used the Cantilever piezoelectric ceramic technology instead. The Mi Mix 2 is expected to feature a better new generation technology for the ear piece sound output. For this, the company will collaborate with AAC technologies and the technology will be known as AAC actuator and it will be used for the earpiece on the Mi Mix 2. This technology will achieve screen sound when the frequency is low to have a better experience. It is also alleged to work better with the 3GPP standard. Mi Mix 2 will be designed by the same French designer Philippe Starck who designed its predecessor Mi MIX.

The interesting thing is that today Manu Kumar Jain, Vice President at Xiaomi and Managing Director at Xiaomi India today posted an image of the smartphone via his official twitter handle indicating its entry in India. His tweet reads “Mi Mix 2 Exicted”. But that seems highly doubtful since the original Mi Mix never made it to India. Keeping this in mind, the company is not likely to announce the phone in India.