Vivo V9 vs Moto X4: Battle of the mid-rangers 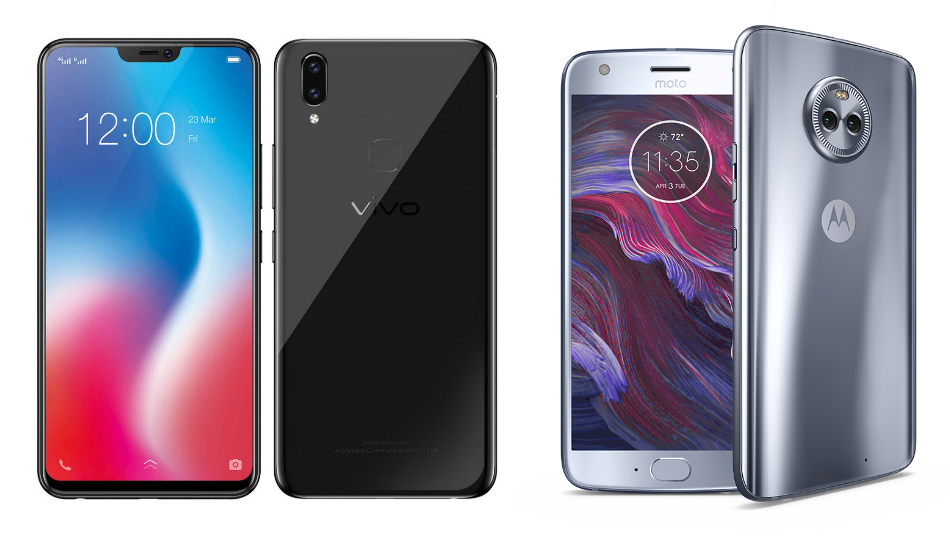 Both the recently launched Vivo V9 and Moto X4 feature 4GB of RAM and 64GB of onboard storage with a similar price tag.

Vivo recently launched its newest flagship device as the Vivo V9 in India which went on pre-orders on Amazon and Flipkart earlier today for an asking price of Rs 22,990. The device features mid-range specifications with 4GB of RAM and 64GB onboard storage just like that of the Moto X4 which falls under the same price bracket. We take a look at the features and configurations of both these smartphones to bring out a contrast between them so potential buyers can decide what they might want for themselves.

The Vivo V9 sports a 6.3-inch FHD+ AMOLED display with a resolution of 1080×2280 pixels and an aspect ratio of 19:9. The Moto X4, on the other hand, features a smaller 5.2-inch standard FHD LTPS IPS display that surely is friendlier for one-hand usage.

The Vivo V9 features a fingerprint scanner at the back while the Moto X4 still features one at the front equipped with several built-in gestures that are accessible easily.

But even with that, the Vivo V9 snatches the crown away as being the only Android phone in the market to feature an iPhone X like notch. The Motorola device in this aspect looks relatively outdated with wide chins on both the top and bottom sides of the device. Also to note is the lighter form factor of the Vivo V9 which only weighs a mere 150g.

The Vivo V9 is powered by a Qualcomm Snapdragon 626 processor which is comparatively slower than the Moto X4’s Snapdragon 630 chipset. Even when it comes to the graphics unit, the Moto X4 is a step ahead with its Adreno 508 GPU which is a better performer than the standard Adreno 506 graphics. Both devices come in 4GB RAM and 64GB onboard storage configuration.

The connectivity in both phones include the regular 4GLTE, Wi-Fi 802.11 a/b/g/n/ac, dual-band, WiFi Direct, Bluetooth v4.2 and GPS, but the Moto X4 flaunts NFC which would allow users to make use of contactless payment solutions. Not just that, the Moto X4 is charged through a Type C reversible connector which will obviously be faster and easier to use than the V9’s micro-USB connector.

On the imaging front, the Vivo V9 boasts of a dual (16 MP + 5 MP) f/2.0 sensor with Phase detection autofocus and dual LED flash and while this specification is more than sufficient for day-to-day photography, the Moto X4 stands on a whole another level. The Motorola device packs in a dual camera setup: 12 MP (f/2.0, 1.4 µm, PDAF, dual pixel) + 8 MP (f/2.2, 1.12 µm, no AF) with wide angle sensors, PDAF, and dual LED dual-tone flash.

While shooting videos, the Moto X4 again does a monstrous feat at recording 2160p videos at 30fps and 1080p videos at 60 frames at second while the Vivo device isn’t capable of showing videos at 60fps.

If selfies are your priority, this is where the Vivo V9 beats the Motorola phone with the help of its 24-megapixel shooter. The Moto X4, however, is equipped with a decent 16 MP, f/2.0 snapper with 1.0 µm pixel size.

If a firmware is anything to go by, its supposed to run the least amount of bloatware. Even though, the Vivo V9 runs the latest Android 8.1 Oreo interface, the fact that Vivo’s Funtouch OS 4.0 overlaps the firmware brings down the performance and fluidity of the smartphone.

The Moto X4, on the other hand, is an Android One device which will always stand in line to get the latest interface straight from Google. It currently runs on a near-to-stock Android 8.0 Oreo interface which is clean and devoid of any skins on top that would hinder the phone’s performance.

The Vivo V9 is backed up by a Li-Ion 3,260mAh battery which doesn’t differ much from the X4’s 3,000mAh battery. Both devices are expected to run for the same duration on a regular daily usage unless the Funtouch OS in the V9 drains more battery.

The Vivo V9 is a decent mid-range powerhouse with gorgeous aesthetic features which makes it a one of a kind Android device. The Moto X4, if not for its looks, it an all-rounder in terms of performance and camera; and if stock ROMs are what soothes you, it’s the right mid-range device overall.

The 4GB RAM/ 64GB storage variants of both Moto X4 and Vivo V9 are priced at Rs 22,990. But Motorola recently also released an upgraded variant of the X4 with 6GB RAM for an asking price of Rs 24,999 which could be a major point while choosing the right smartphone for you.