OnePlus Nord 2 has blasted yet again in a user's right pocket in India. The blast has caused severe injuries to the user's right thigh 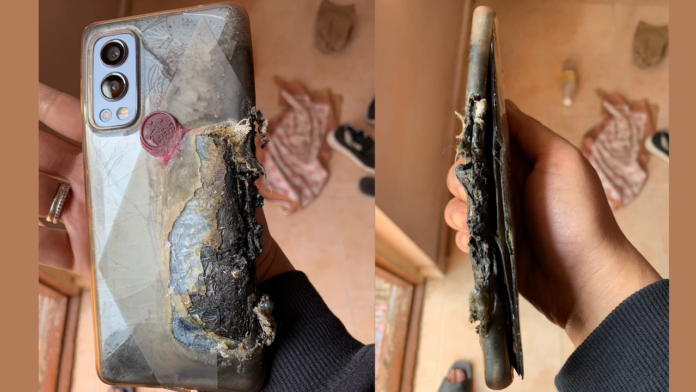 Off late, OnePlus Nord 2 has been in the news for all the wrong reasons. Some time back a couple of Nord 2 blasted and now the third incident has been reported that has severely injured the user as well.

The incident was reported by Suhit Sharma on Twitter. The blast took place in Dhule, India when the phone was in the right pocket of the user where it suddenly blasted out of nowhere. Suhit on Twitter said, “Never expected this from you”, “see what your product have done. Please be prepared for the consequences. Stop playing with peoples life. Because of you that boy is suffering contact asap”.

Suhit also shared images of the user’s burnt leg, along with the damaged phone’s rear. The phone has been burnt from the bottom left along with the TPU case it was sitting in. The right thigh of the user has been severely burnt with the body skin being peeled off.

Soon after the incident was reported, OnePlus responded with a statement saying, “We take such incidents seriously. Our team has reached out to the user and we are in process of collecting the details to investigate this further”. The company is yet to reveal the exact reason behind the explosion.

The first time the Nord 2 exploded was back in August. At that time, the OnePlus Nord 2 blasted inside a woman’s sling bag while she was cycling. The woman bought the new Nord 2 just a few days ago. The victim is said to have met with an accident and is in trauma following the incident, the post highlights. User Ankur Sharma from Bengaluru also posted images of the damaged unit.