Nokia is currently offering 23 3G enabled handsets in the country and more are expected very soon. Here's a list of some of the best 3G smartphones from the market leader.

Nokia has constantly been losing market share to other, newer entrants in the Indian handset industry. According to the latest IDC report, Nokia’s market share plunged to 36.3 per cent in June from 54 per cent at the end of 2009 and from over 70 per cent in 2008. However, the company’s market share has fallen because the size of the market has increased and new mobile users (mostly in tier two cities and rural areas) are being catered to by manufacturers other than Nokia.
Now, with 3G in the offing in India, Nokia too has developed 3G enabled phones, including a low cost 3G device, Nokia 2730, to address its price sensitive audience.
At present, Nokia is offering 23 3G-enabled handsets in the country, and more are expected to arrive very soon. Here is a list of some of the best, available and awaited, 3G handsets from Nokia:
1. Nokia C6 – Priced at Rs 13,000 this is by far the most loaded phone in Nokia’s C series. The touchscreen smartphone has a slider Qwerty keyboard and a 5.0 mega pixel camera with LED flash. It includes WiFi, GPS and a 3.5 mm jack, and offers a plethora of Ovi services, including Nokia Ovi Store, Music, Chat and Mail.
2. Nokia C5 – Nokia C5 is available for approximately Rs 8,000. The device supports Ovi Maps 3.0 and Nokia Messaging. It comes with a 3.2 megapixel camera with flash, a music player and a built in FM radio with RDS.
3. Nokia E72 – A successor to Nokia E71, this is another bestseller from the company’s E series and is priced at about Rs 16,000. E72 supports WiFi and comes with a 5.0 megapixel camera with flash. It also offers navigation and video calling.
4. Nokia E71 – E71 costs around Rs 13,000. The phone has a 3.2 megapixel camera and is WiFi enabled. It also supports Bluetooth 2.0 with A2DP, and has GPS receiver with AGPS.
5. Nokia E63 – Priced at about Rs 9,000 Nokia’s E63 has a 2.0 megapixel camera with flash, WiFi support, Bluetooth with A2DP, as well as Nokia Maps and Messaging.

6. Nokia E5 – At about Rs 11,000 Nokia E5 offers Ovi Maps, Nokia Messaging and WiFi connectivity. E5 has a GPS receiver with AGPS support and a 5 megapixel camera with LED flash.
7. Nokia N900 – This touchscreen device costs approximately Rs 24,000 and comes with Linux-based Maemo software. It has a built in 5.0 megapixel camera with Carl Zeiss optics. N900 includes WiFi connectivity and comes with an internal memory of up to 32 GB.
8. Nokia N8 –At about Rs 23,000 N8 is slightly cheaper than the N900. The device boasts a 12 megapixel camera with Xenon flash and an OLED screen. N8 comes with 16 GB of on board memory and expandable memory up to another 32 GB. It can also be used for video calling.
9. Nokia X5-01 – This is a compact slider phone and costs about Rs 9,000. X5-01 has a square design and a Qwerty keyboard. It supports WiFi connectivity, has a 5.0 megapixel camera with LED flash and supports Bluetooth with A2DP.
10.Nokia 5800 Express Music – For about Rs 12,000 Nokia 5800 is a 3.2 inch touchscreen phone. It has a built in WiFi and GPS. The device has powerful speakers and is targeted at music lovers. Nokia 5800 also has a 3.2 megapixel camera with autofocus and a double LED flash.
11. Coming Soon: Nokia E7 – This business smartphone priced at about Rs 30,000 has a 4 inch ClearBlack AMOLED touchscreen and a sliding Qwerty keypad. It offers Nokia Maps with free GPS navigation, has an 8 megapixel camera, and supports HD video. 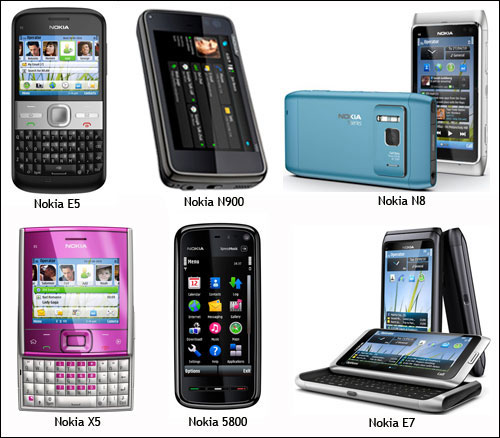