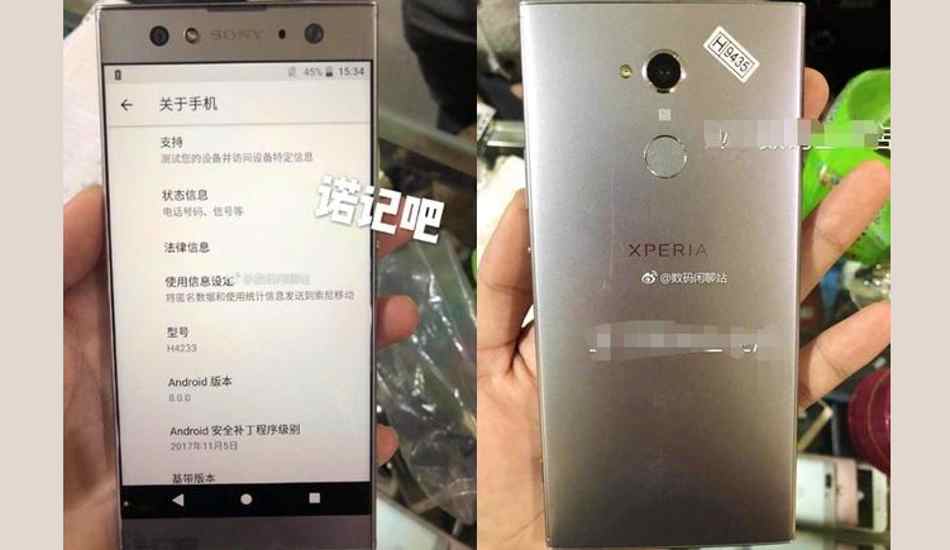 The device will feature a rear-mounted fingerprint sensor below the rear camera sensor and LED flash.

Sony is expected to launch its new smartphones at the upcoming Mobile World Congress event to be held in Barcelona next year. The Japanese handset maker is working on H4133, H4233 and H3213 and H8216/ H8266 smartphones. The Sony H4233 will be named as Sony Xperia XA2 Ultra and it will be a successor of the Xperia XA1 Ultra smartphone that was launched this year in India. Now the first live images of the device have surfaced online which reveals the key design details.

As per the images, the Xperia XA1 Ultra has thick bezels design similar to the original XA1 Ultra. The live images also highlight that the XA2 Ultra will come with dual cameras for selfies, unlike the XA1 ultra. It also shows that the device will feature a rear-mounted fingerprint sensor below the rear camera sensor and LED flash.

One image shows the “About Phone” section of the device which also confirms the model number as H4233. It also shows that the Xperia XA1 Ultra comes with Android Oreo 8.0 Oreo andand has November’s security patch installed.

Sony Xperia XA2 Ultra was spotted on GFXBench benchmarking website in September this year as per which Sony H4233 has a 6-inch full HD display with 1280×1080 pixels resolution and 5 finger gesture support. It is powered by 2.2GHz octa-core Qualcomm Snapdragon 630 processor coupled with Adreno 508 and 4GB RAM. It offers 64GB of internal storage out of which 43GB will be reserved for the users. In the listing, it is not mentioned whether the storage can be further expanded or not. Besides, it has the latest Android 8.0.0 Oreo operating system.

Moreover, Sony H4233 has a 21-megapixel autofocus camera and a LED flash on its rear panel while a 16-megapixel camera is in its front. Both the cameras are said to support 4K video recording The rear camera has features like autofocus, face detection, flash, HDR photo and touch focus. The GFX listing shows that the device has connectivity features like Bluetooth, GPS, NFC and WiFi. As per the listing, the device has an accelerometer, light sensor, Pedometer and proximity sensor as well.