A new mid-range phone from Sony has been spotted on GFXBench, which reveals that it will come loaded with dual front cameras.

It seems Sony is finally adopting the dual cameras for its next smartphone. A new mid-range phone from Sony has been spotted on GFXBench, which reveals that it will come loaded with dual front cameras. 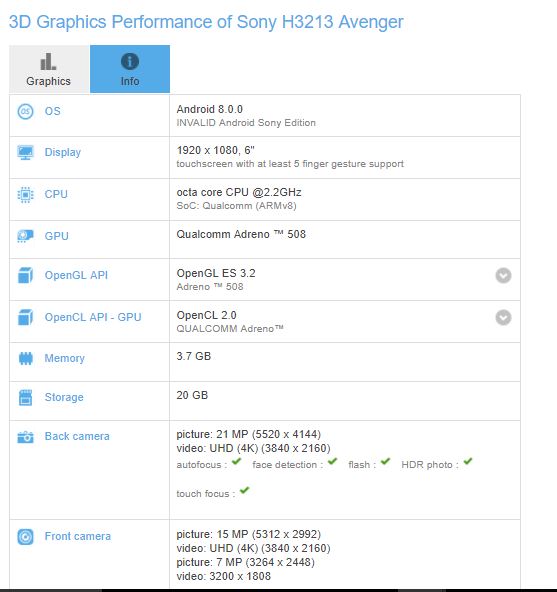 The listing reveals that the upcoming smartphone will sport a 6-inch Full HD display with a screen resolution of 1920 x 1080 pixels. The phone will be powered by an octa-core Qualcomm Snapdragon 630 processor along with Adreno 508 GPU. The device will be backed by a 4GB of RAM and 32GB of internal storage. The Sony H3213 Avenger will run on Android 8.0 Oreo and it will support features like accelerometer, Bluetooth, GPS, compass, NFC, proximity sensor, single SIM, light sensor, and WiFi.

On the camera front, both the devices feature 13-megapixel rear camera with autofocus, Exmor Sony sensor, 8x digital zoom and LED flash. For the front, there is an 8-megapixel shooter for selfies and video calling.

The smartphones are Android 8.0 Oreo ready, meaning that the company will soon update it to the latest Android version. Both of them run on Android Nougat. The Xperia R1 Plus and Xperia R1 feature a 2620mAh battery. On the connectivity front, both of them supports, 4G VoLTE, GPS, Bluetooth 4.2, USB Type-C, WiFi and dual-SIM support. Both of them measures 146 x 73.2 x 8.89 mm and weighs 154 grams.