Other features of it include a 5 megapixel rear camera and a VGA front facing camera for video calls. For connectivity, Samsung Omnia W has Bluetooth v 2.1, USB 2.0, and Wi-Fi 802.11 b/g/n. Features like Accelerometer, Ambient Light, Proximity, Magnetometer, Gyroscope. The smartphone has HSPA, EDGE, GPRS capability for faster web browsing as well. The Li-on 1,500 mAh battery in the smartphone ensures a decent talktime. 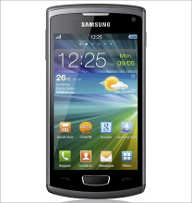 For connectivity, it has Bluetooth v3.0, USB 2.0, WiFi Direct, WiFi 802.11 b/g/n. Besides, it has a 5 megapixel back camera with LED flash and a VGA front facing camera. Samsung Wave 3 has a 4GB internal memory which can be expanded upto 32 GB through a micro SD card. For entertainment it has also stero FM radio and has 3.5 mm jack for universal connection.

This is an Android 2.3 Gingerbread mobile phone with a 832 MHz processor and for a price that is mouth watering at just Rs 7830. While the display in smaller compared to other budget smartphone with a 3 inch TFT capacitive touchscreen, the OS and the processor are far superior than any other phone priced in this range.

This 3G phone has WiFi and Bluetooth capability as well. There is a 2 megapixel front facing camera as well. Other features include A-GPS, 1200 mAh battery, 3.5 mm jack, 32 GB external memory, USB 2.0, and FM radio.