The latest specs sheet leak gives some insight of the upcoming Galaxy S8+ revealing some key spec of the device.

Samsung’s upcoming flagship, the Galaxy S8 and S8 Plus are hovering over the internet rumour market for quite some time now. The smartphones have been subjected to various leaks and rumours andthe latest in the basket gives some insight of the upcoming Galaxy S8+ revealing some key spec of the device.

The alleged full specs sheet has been shared by a renowned tipster Evan Blass which reveals that the Plus variant will indeed boast a 6.2-inch Quad HD+ Super AMOLED Display. The leak also reveals that the device will sport an iris scanner, although there is no mention of a fingerprint sensor, but multiple reports suggest that it will come with rear-mounted fingerprint sensor.

The smartphone will come with IP68 certification which means it will be water and dust resistance. Also, it will come with wireless charging support but you might have to shed some extra cash to get a charging pad. 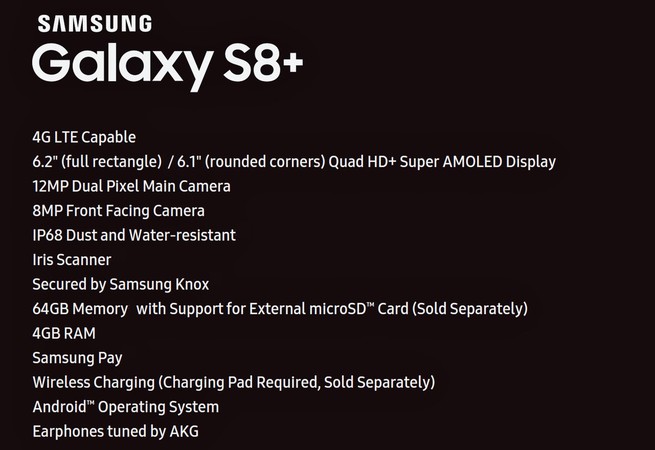 On the camera front, the device will sport a 12-megapixel rear camera with dual pixel technology, while for the front there will be an 8-megapixel shooter for selfie and video calling. However, the leak doesn’t reveal the processor but we already know that it will come with a Qualcomm Snapdragon 835 processor and it might probably come with company’s in-house Exynos 9-series chipset.

Further, the spec sheet reveals that the device will come with a 4GB RAM and 64GB of internal storage which can be further expanded via MicroSD card. Other features include an Android operating system which surely would be Android Nougat, earphones tuned by AKG, Samsung Pay and the device will be secured by Samsung Knox.

The leak is in line with previous rumours that suggested somewhat similar specifications about the upcoming device. However, it is still not confirmed by the company so we suggest you take this report with a grain of salt.