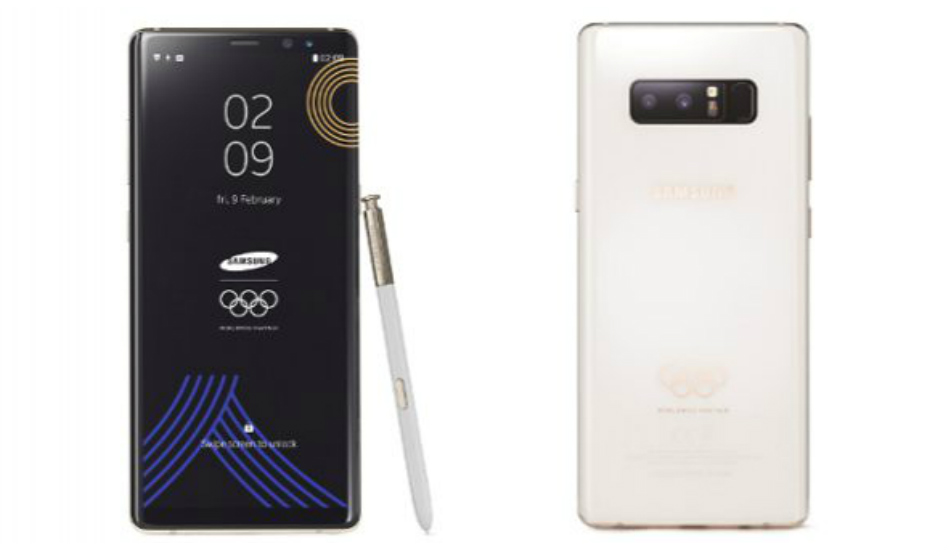 The limited edition comes loaded with a white back panel and at the bottom, one can see Olympic rings.

Samsung has announced a special edition of its latest flagship device, the Galaxy Note 8. Dubbed as PyeongChang 2018 Olympic Games Limited Edition, Samsung will provide the devices to athletes and Olympic family.

The limited edition comes loaded with a white back panel and at the bottom, one can see Olympic rings. Samsung will deliver over 4,000 devices to all Olympians as well as the PyeongChang 2018 Olympic family, including IOC and POCOG staff.

Rest of the specifications remains the same. To recall, the major highlight of the smartphone is the dual rear cameras. This is the first Samsung device to come equipped with a dual-camera setup. The phone sports a combination of 12-megapixel wide-angle lens and 12-megapixel telephoto lens, with both sporting optical image stabilization (OIS). The wide-angle lens comes with aperture f/1.7, 1.4-micron pixel size, 77-degree field of view.

The Samsung Galaxy Note 8 features a 6.3-inch Quad HD+ Infinity Super AMOLED display with a screen resolution of 2960 x 1440 pixels. The device is powered by a 2.3GHz octa-core Exynos 8895 processor along with 6GB of RAM and 64GB of internal storage, which can be further expanded up to 256GB via micro SD. The Galaxy Note 8 runs on Android 7.1.1 Nougat and it is backed by a 3300mAh battery with fast charging support on both wired and wireless. On the connectivity front, it supports 4G VoLTE, WiFi 802.11ac, VHT80 MU-MIMO, Bluetooth 5.0, GPS, USB Type-C, NFC, MST and hybrid dual-SIM.

For security, the company has added iris scanner, facial recognition and fingerprint sensor, which is situated on the back panel. The device also comes loaded with Knox protection and it is equipped with company’s in-house virtual Assistant Bixby. The device measures 162.5 x 74.8 x 8.6mm and weighs 195g.