Further, the smartphone has been spotted on AnTuTu and GFXBench listings, which reveals some key specifications.

Samsung is all set to launch the latest flagship device, the Galaxy Note 8, on August 23. Now, just ahead of its official launch, Samsung has released the first teaser of the upcoming device, which reveals “bigger display”. Further, the smartphone has been spotted on AnTuTu and GFXBench listings, which reveals some key specifications.

Starting with the teaser video, it highlights some key features of the upcoming phablet. To start with, the teaser reveals a bigger display of the Galaxy Note 8 and it will come with stylus support as well. The video is accompanied by a caption, which reads, “Starting August 23, 2017, do bigger things. #DoWhatYouCant.”

Meanwhile, the Note 8 was spotted on GFXBench and AnTuTu benchmarking websites, which reveals some key specifications and features of the upcoming device. Starting with AnTuTu listing, the smartphone bears a model number SM-N9500 and it is powered by the latest Qualcomm Snapdragon 835 processor along with 6GB of RAM and 64GB of internal storage. Interestingly, the listing reveals a display resolution of 1080 x 2220 pixels, which is basically the default option that comes with Samsung flagship models. The listing further reveals that the smartphone scored over 179,000 points. 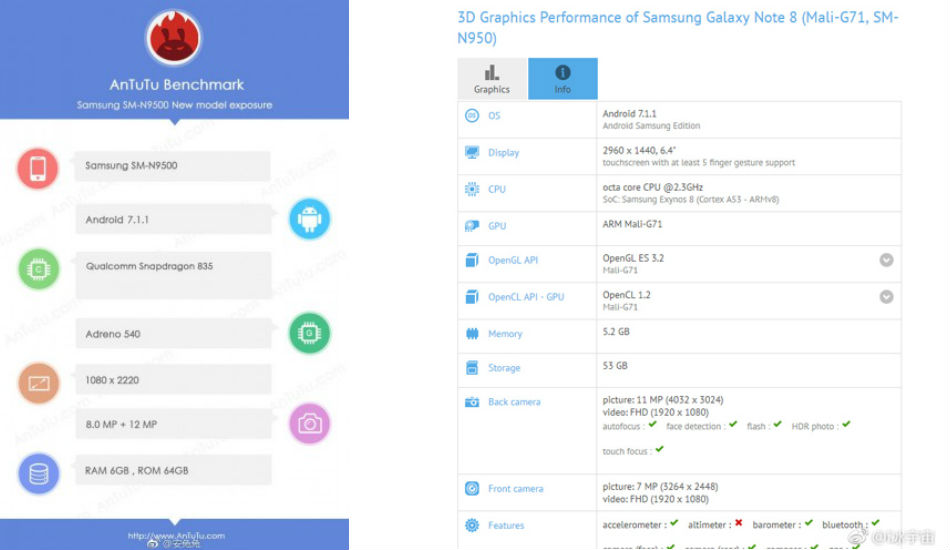 Coming to the GFXBench listing, one can notice some differences. The variant spotted on the benchmarking site comes with company’s in-house Exynos 8895 processor along with Mali-G71 GPU. The display of the smartphone in 6.4-inch, as per the listing and it comes with a screen resolution of 1440 x 2960 pixels, which higher than the one spotted on AnTuTu. Other than this, the listing reveals the same 6GB RAM and 64GB storage combo, which means that it will be the first smartphone from the Note series to sport such high RAM configurations.

Recollecting some previously leaked specs, the smartphone will boast a dual-camera setup with both featuring 12-megapixel sensors. The primary camera will be a wide-angle one with aperture f/1.7 and dual-pixel autofocus, while the other one will be a telephoto lens which will give a 2x optical zoom and has an aperture of f/2.4. For the front, there will be an 8-megapixel shooter with a f/1.7 autofocus sensor.

On the battery front, the device will be backed by a 3300mAh battery along with fast-charging support via USB Type-C port or wirelessly. The report further mentions that the Galaxy Note 8 will the first ship in Midnight Black and Maple Gold colour variants, followed by Orchid Grey and a new Deep Sea Blue colours. As for the price is concerned, the phablet is reported to be brand’s most expensive smartphone ever. Multiple reports suggest that the smartphone could be priced at $1000 in the home country i.e. South Korea, which roughly translates to Rs 64,695. In other markets like the US and Europe, the Galaxy Note 8 will be priced at $1,100 (approx. Rs 71,165).