Bigger, better, lighter and a whole lot moreâ€¦ just like its price tag.

Following the international announcement closely, Samsung has announced its much-awaited flagship Samsung Galaxy Note 3 in India. While the device has been priced towards the expensive side of the price curve, especially considering the Indian market, the Galaxy Note 3 finds itself competing with devices like the HTC Butterfly S and the soon to be launched Apple iPhone 5S flaunting 64 bit architecture for a mobile phone with faster computing.

After the entire buzz the Galaxy Note 3 has created worldwide it was great to finally experience the smartphone during a press event that took place in Delhi. Although the price of the device is way off expectations it comes with a greater set of features offering superb functionality to impress users.

The design of the device is similar to the Samsung Galaxy S4, which was launched earlier this year in India. The device is very slim and light, making it easy to use. It comes in three colors: white, pink and black, and with a range of smart covers with faux leather and several colorful options. 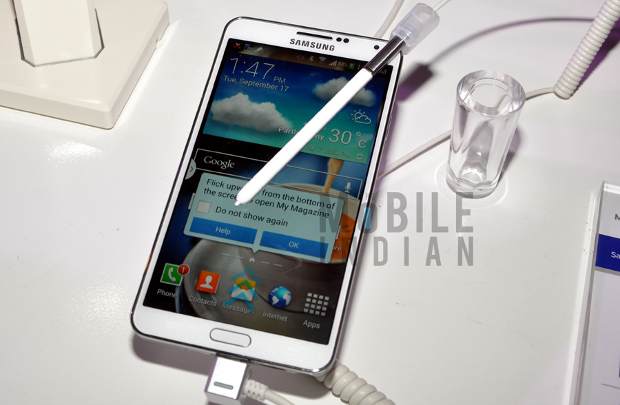 The device features a polycarbonate body that makes it light, durable and immune to dents and bruises during falls, which can be frequent with devices this big. It features metallic trimming on the edges all around the device that give it a unique accent as well. The device gets a big 5.7 inch display but actually feels smaller than the older Note II smartphones. Samsung has managed this by using ultra slim bezel along the sides and reducing the space under and above the display, resulting in a bigger display while reducing the size of the device and making it smaller than its predecessor, which is slimmer as well. 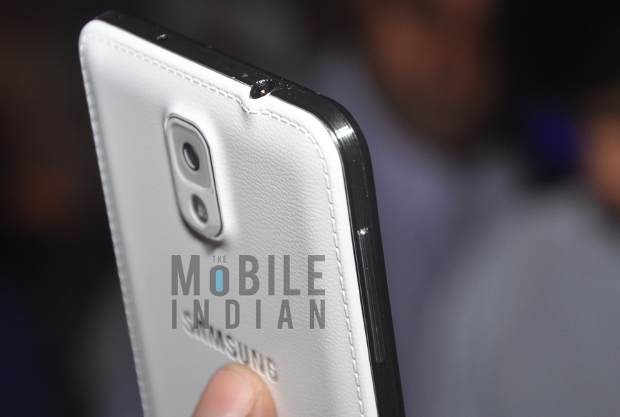 Galaxy Note III is just 8.3 mm thick and it is still slimmer than the 9.4 mm thick Galaxy Note II. In terms of weight, the Note 3 measures 168 grams compared to the older Note II, which weighs 180 grams, while featuring an even bigger battery than the Note II. 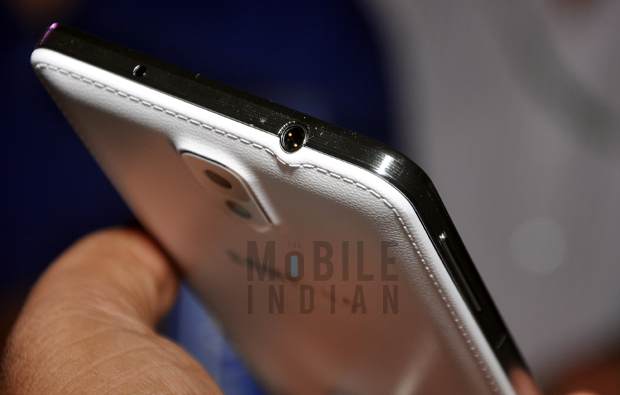 Samsung Galaxy Note 3 is the second Android smartphone in India to feature an eight core Samsung Exynos 5 Octa core mobile processor clocked at 1.9 GHz and the new PowerVR SGX544MP3 graphics chip. The Exynos 5 Octa is similar to the one that powers the Samsung Galaxy S4 device, but with higher clockspeed offering faster computing with four cores of a low performance ARM Cortex A7 architecture clocked at 1.3 GHz and four cores of high performance ARM Cortex A15 architecture clocked at 1.9 GHz. To know more about ARM architectures read here (https://www.themobileindian.com/news/11825_ARM-Cortex:-The-force-that-drives-mobile-devices). 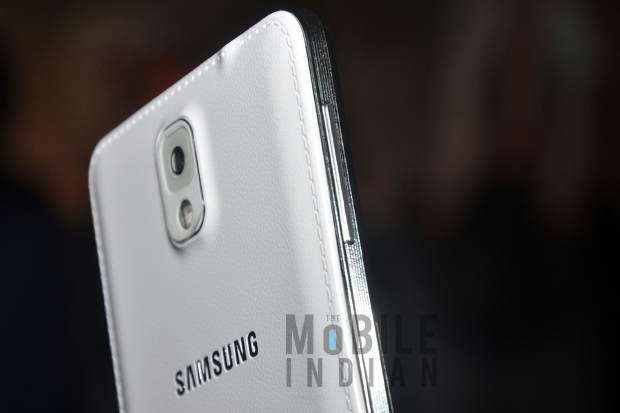 The Samsung Galaxy Note 3 gets 3 GB RAM and comes in one 32 GB on-board storage version only for India. But that’s not all as it supports 64 GB of memory expansion via micro SD cards as well.

The Samsung Galaxy Note 3 runs Android 4.3 Jelly Bean with a layer of the latest Nature UX as part of TouchWiz UI. Like Samsung Galaxy S4 it has smart pause that pauses the video being watched the moment the user moves his/her attention away from the device and air gestures, which means users just need to hover their hand over the device to move between pages or images. Along with that the improved S-Pen comes with newer features and functionalities with additional utility features as well, which we will be talking about in a more detailed review coming soon. 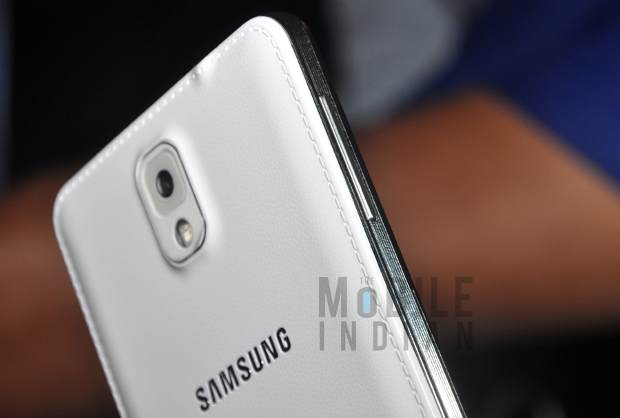 At the back Samsung has used a 13 megapixel camera with LED flash, similar to its flagship Samsung Galaxy S4. The camera features BSI sensor and possesses zero shutter lag. The camera is capable of recording full high definition video at 30 frames per second and features smart image stabilization as well, which is somewhat like optical image stabilization, but in order to save space simple optics had to be used for it. There is also a front facing camera capable of clicking high quality self-portraits and video. Samsung has included the dual shot feature that allows the phone to record video and click images, as well as click two images at the same time using both cameras.

For connectivity, apart from 3G network and high speed WiFi support Samsung has also added Bluetooth 4.0 LE and infrared LED for remote control. This can be used to control televisions right from the mobile phone without having to search for a remote every time. 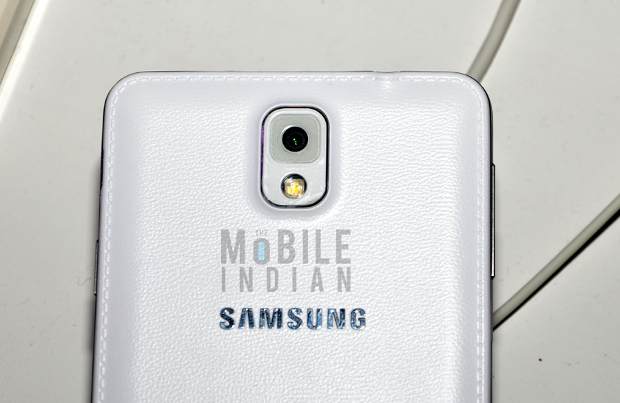 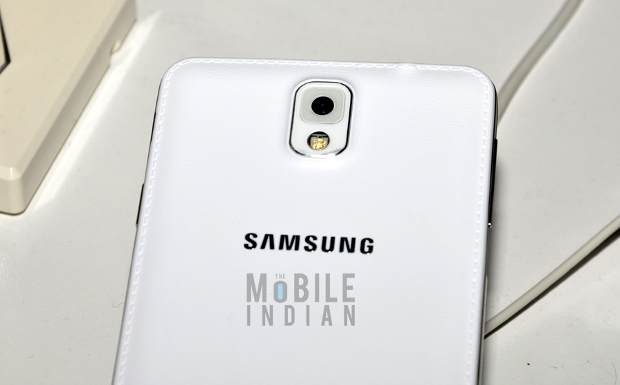 The device is a great experience but its price has been kept on the more expensive side. In India the Samsung Galaxy Note III will cost Rs 49,900 for the 32 GB variant. But at this price it comes fully loaded with features that could put other flagships to shame. 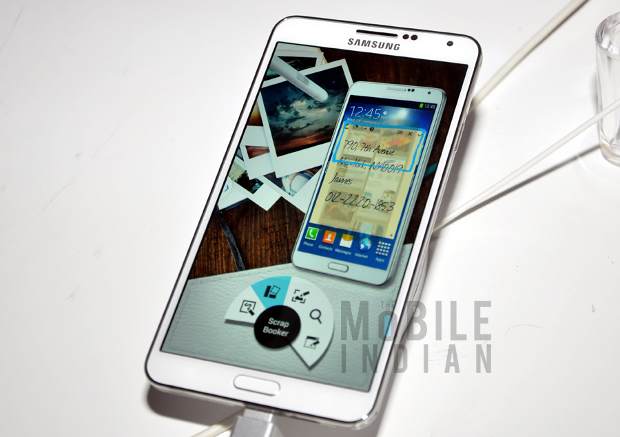 We have more in depth information about the performance and features of the device in our upcoming full review.