Samsung Galaxy M01s with model number SM-M017F/DS is now listed on the Samsung India support website, hinting at an imminent launch in the country.

Seems Samsung is all set to launch a new phone in the M-series in India. Dubbed as Samsung Galaxy M01s, the support page of the phone is live on Samsung India website.

Samsung Galaxy M01s with model number SM-M017F/DS is now listed on the Samsung India support website, hinting at an imminent launch in the country. Also, the DS in the model number hints towards the support for dual-SIM.

The support page, however, does not actually reveal much details for the upcoming Samsung smartphone but it does suggest that the smartphone will soon be launched in India. Additionally, the support page also mentions 3GB of RAM. 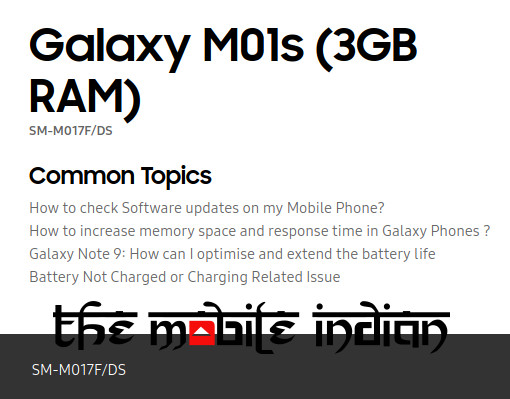 As per an earlier report, the Samsung Galaxy M01s will come with 32GB of internal storage. Samsung will also reportedly launch the Galaxy M01s in two colour variants – Blue and Gray.

Samsung recently launched the Galaxy M01 in India for Rs 8,999. The phone comes with a 5.71-inch HD+ Infinity-V display with a screen resolution of 1560 x 720 pixels. It is powered by a 1.95GH Qualcomm Snapdragon 439 octa-core processor, paired with 3GB of RAM and 32GB of onboard storage.