Both the smartphones were launched in India with 16GB internal storage in September last year.

The Samsung Galaxy J7 Prime and the Galaxy J5 Prime 32GB variants have been launched officially by the company in India. The new Samsung Galaxy J7 Prime and the J5 Prime 32GB are priced at Rs 16,900 and Rs 14,900 respectively. Both the variants are available in major retailer stores across the country and also on Samsung’s official e-store online. To recall, both the smartphones were launched in India with 16GB internal storage in September last year.

Samsung has announced the launch via its official Twitter handle. The company’s tweet reads “Get more space than before! GalaxyJ7 J5Prime now come in a 32GB variant for more room for your favourites. Buy now!” 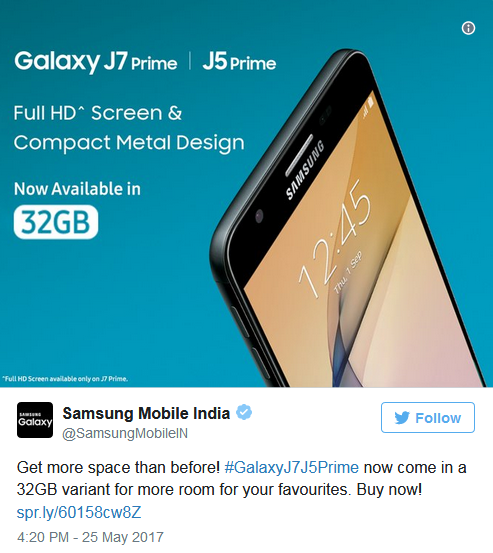 The Samsung Galaxy J7 Prime and J5 Prime 32GB were earlier reported to be available offline by Manish Khatri of Mahesh Telecom, a Mumbai-based mobile phone retailer at the same price.

As far as specifications are concerned, the Samsung Galaxy J7 Prime has a metal body and a 5.5-inch 2.5D glass display that comes with 1920×1080 pixels resolution and Gorilla Glass 4. It is powered by a 1.6 GHz octa-core processor, which is paired with 3GB RAM and 32GB internal storage. An expandable storage slot is there for a micro SD card of up-to 256 GB capacity. The smartphone runs on Android 6.0 Marshmallow operating system and also offers a fingerprint scanner, which is integrated on the home button.

On the other hand, the Samsung Galaxy J5 Prime comes with a full metal body and a 5-inch HD (720p) display, It is powered by a Exynos quad-core processor, which is paired with 2GB RAM. The Galaxy J5 Prime comes with 32GB of internal memory, which can be further expandable up to 256GB via a micro SD card. The smartphone runs on Android 6.0 Marshmallow operating system and is backed by a 2,400 mAh battery.

On the camera front, Galaxy J5 Prime flaunts a 13-megapixel rear camera with f/1.9 aperture and an LED flash, and a 5-megapixel front-facing camera with f/2.2 aperture for selfies and video chats. The smartphone also has a fingerprint sensor that is integrated into its home button. Besides, the smartphone offers dual-SIM slots, 4G with VoLTE support, WiFi, Bluetooth, GPS, and a micro USB port.