If you are ready to spend Rs 20,000 to buy a smartphone, you should read this. 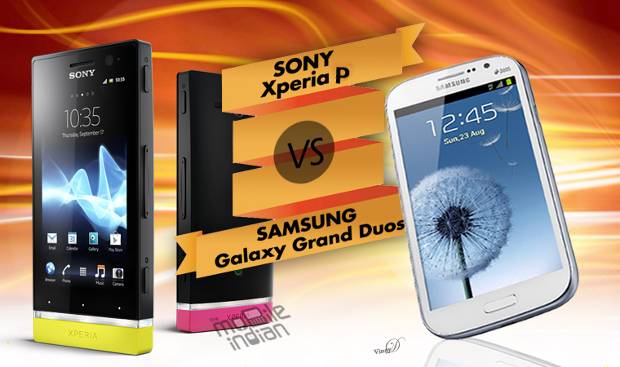 Samsung Galaxy Grand Duos is a new handset while Sony Xperia P has been around for quite sometime. So before you make up your mind to pick up the latest handset, read this comparison of the two phones.

However, bigger displays are not always necessarily better. For instance, Samsung Galaxy Grand Duos has a 5 inch display with 480 x 800 pixel resolution, which does not look good on paper since even smartphones priced at Rs 10,000 or less come with this display resolution.

On the other hand, Sony Xperia P has a smaller 4 inch display but has 960 x 540 pixel resolution. So the pixel density of Sony Xperia P is much more than that of Galaxy Grand Duos; this means that pictures will look sharper and better on the Sony handset.

According to Sony, the Xperia P has WhiteMagic technology that makes its display twice as bright and up to twice as power efficient than normal LCD screens. The display of Sony Xperia P is also scratch resistant while nothing of the sort is known about the Samsung Galaxy Grand Duos.

However, we had reviewed the Sony Xperia P earlier, and we found it swift. “There is no lag or slowness whether it is running heavy graphics game or movies. Its TFT LCD display comes handy while playing games or movies. Applications close and open very fast, making it a breezy affair to switch between applications,” I had said then.

Both handsets come with an 8 megapixel rear camera, but in Sony Xperia P there is a 0.3 megapixel front camera and the Grand Duos has a decent 2 megapixel camera in the front. The Galaxy Grand Duos can capture videos at 30 frames per second at 1920 x 1080 pixel resolution, i.e full high definition videos. Both handsets can capture full high definition videos and have many camera features.

The Xperia P comes with WiFi, a micro USB port, WiFi, GPS with A-GPS support, Bluetooth, a 3.5 mm jack, DLNA, NFC and an HDMI port. The Samsung Galaxy Grand has all the above mentioned connectivity features except an HDMI port, NFC and DLNA features.

Since SAR value value is a noted factor these days, we thought it apt to mention the SAR figures of both these handsets. The Sony Xperia P has a SAR (Specific Absorption Ratio) of 0.78 w/kg while Samsung Galaxy Grand Duos has only 0.31 w/kg SAR, which means that the you will be exposed to less radiation while using the Grand Duos than if you use the Xperia P. Though the ill effects of mobile radiation are yet to be established you can be on the defensive if you wish.

The comparison says it all; with a bigger screen, bigger battery, huge memory slot, better front camera, latest operating system, and a slightly better processor, the Samsung Galaxy Grand Duos wins the battle against Sony Xperia P without any doubt, and in style.

The Sony Xperia P, however, is not a bad smartphone at all. We reviewed it and found it to be good. Had Sony released the Android Jelly Bean for it, the Xperia P could have competed well with some of its other handsets but we have not yet concluded the fight of these two giants as we will soon bring a complete review of the Samsung Galaxy Grand Duos, soon after which we will close the chapter of this fight once and for all. So keep checking The Mobile Indian.