Images of the upcoming smart watch - Samsung Galaxy Gear's Manager app got leaked online to give a sneak peek about what's in store.

Samsung is set to announce its new smart watch like device, purportedly called as Galaxy Gear, at the Mobile Unpacked 2013 on September 4 in Berlin, Germany. The Samsung Galaxy Gear was confirmed by Samsung Executive and the smart watch will not have a flexible display. Now the first images of so-called Galaxy Gear Manager app for Android were shared by the EVleaks via Twitter account.

Samsung Galaxy Gear is a smart watch that can be paired with an Android device to be used for checking notifications and important updates. The leaked images of the Galaxy Gear Manager app show that the Galaxy Gear tags model number as SM-V700. 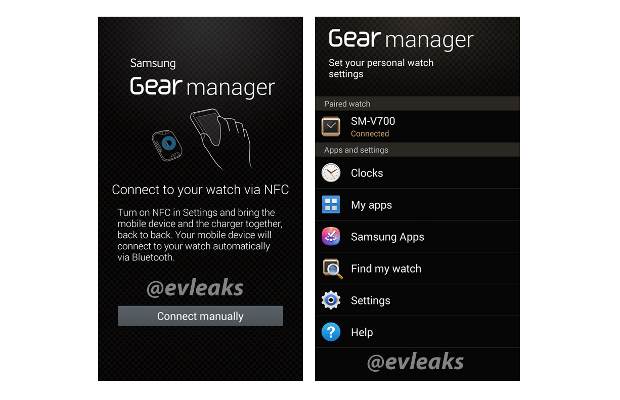 Once the Galaxy Gear is paired with the device, the Manager app will let the user customise the information that would be pushed and made available on it. Apart from the Android apps, Samsung will ensure that the “Samsung Apps” from the Samsung App Store would also be compatible with the smart watch.

There is no hint on the availability and pricing of the Galaxy Gear. However, we are ready to be surprised.