Surprisingly, all the specifications by Geekbench listing are the same as previously launched Galaxy A50. So, we should expect only the minor updations here and there in the upcoming version of Galaxy A50.

Looks like Samsung is working on another A-series smartphone, as a new phone with model number SM-A505F has been spotted on Geekbench website, revealing few of its specifications. If by go by the model number (SM-A505F), it could be another version of earlier launched Samsung Galaxy A50 and might be introduced as Samsung Galaxy A50s. 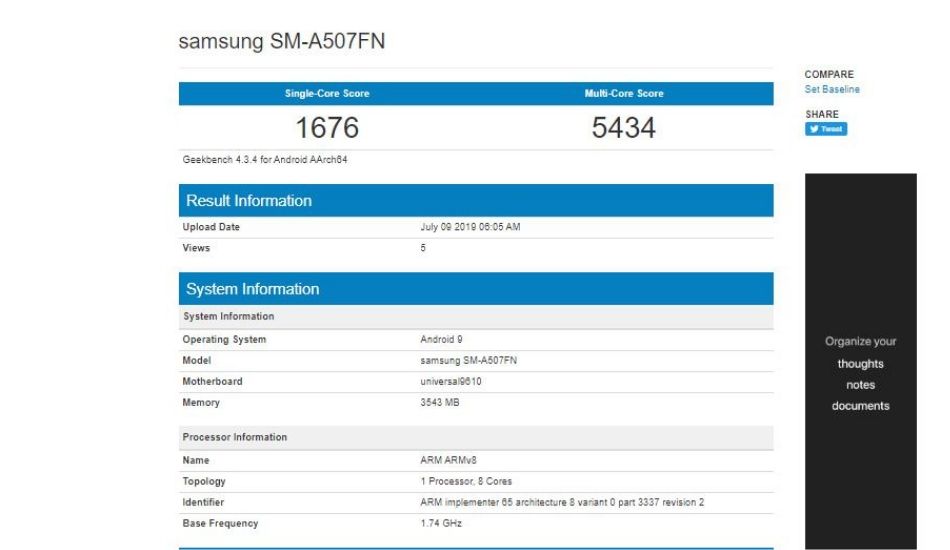 Surprisingly, all above-revealed specifications by Geekbench listing are identical to the Galaxy A50. So, we should expect only the incremental updates in the upcoming version Galaxy A50.

Just to refresh, Samsung Galaxy A50 has a 6.4-inch (2340 x 1080 pixels) Full HD+ Infinity-U Super AMOLED display and it is powered by an octa-core Exynos 9610 10nm processor with Mali-G72 GPU. the phone is available in two storage variants including 4GB RAM with 64GB storage and 6GB RAM with 64 GB storage. The memory can be further expanded up to 512GB via micro SD card, runs on Android 9 Pie and is backed up by 4000mAh battery with fast charging.