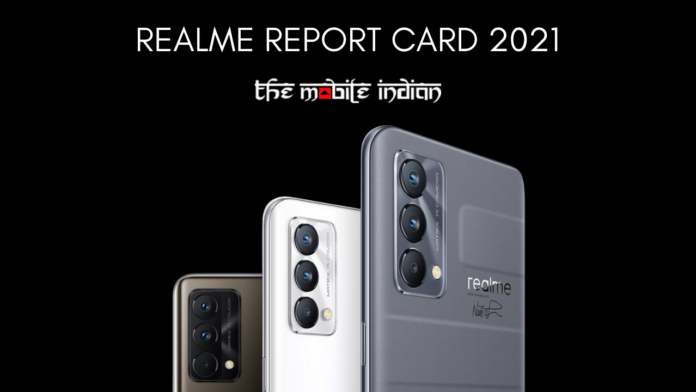 Among the Chinese Brands, Realme has launched the most number of smartphones in 2021 in India. But with so many models with multiple variants, how did Realme handle everything? Did it adopt the right way or did it miss something? Let’s find out in our Report Card series for 2021 where we find out how Realme did throughout the year and what’s the best smartphone it launched:

Realme’s growth for the first two years after it debuted in India had been great and this year, despite the pandemic, it seemed like Realme held its ground well while maintaining its launch pattern and growth.

Moreover, Realme was expanding into every price and product segment and was growing beyond just launching smartphones where the brand made its presence felt and focused on AIoT and Audio products as well and also launched a sub-brand called Dizo.

As for the misses, despite launching a number of smartphones in every price segment, we feel the brand somewhere made the scenario confusing for the end consumer as to which smartphone is better than the other and what does it specialise in. Be it the naming scheme of the smartphone or the price to performance ratio, we feel that Realme did cannibalized some of its own products.

Realme did flood the market with smartphones but lacked X factor to grab attention.

Out of the 25 models launched this year, here are the top 3 devices launched by Realme that in our opinion, stood out and were the best from the brand:

Launched back in September with a starting price of Rs 17,999, the Realme 8s was the first 5G phone from the brand launched in the respective segment and was overall a good smartphone while not having any major cons about it. It had a 90Hz refresh rate display with a MediaTek Dimensity 810 SoC.

Realme X7 Pro was one of the first devices to launch in India with the MediaTek Dimensity 1000+ chip and was a segment-defining smartphone. It had great cameras along with a decent display that made the smartphone stood out of the crowd and hold the position of number two.

The crown for the first position goes to the GT Master Edition that came with Snapdragon 778G SoC and had a starting price of Rs 25,999. It was a bang for the buck smartphone with a unique suitcase-like design and stood out from the other Realme smartphones that follow a traditional design language, quite literally. We don’t seem to find a single con about the smartphone and can say that it deserves the first position.

That was it for our Report Card of 2021 for Realme. It will have to be seen whether Realme follows the same strategy next year which it did this year or does it completely change, especially when the Realme GT 2 Pro, the company’s most premium flagship smartphone is all set to launch and compete with the likes of Galaxy S22 series and OnePlus 10 series.