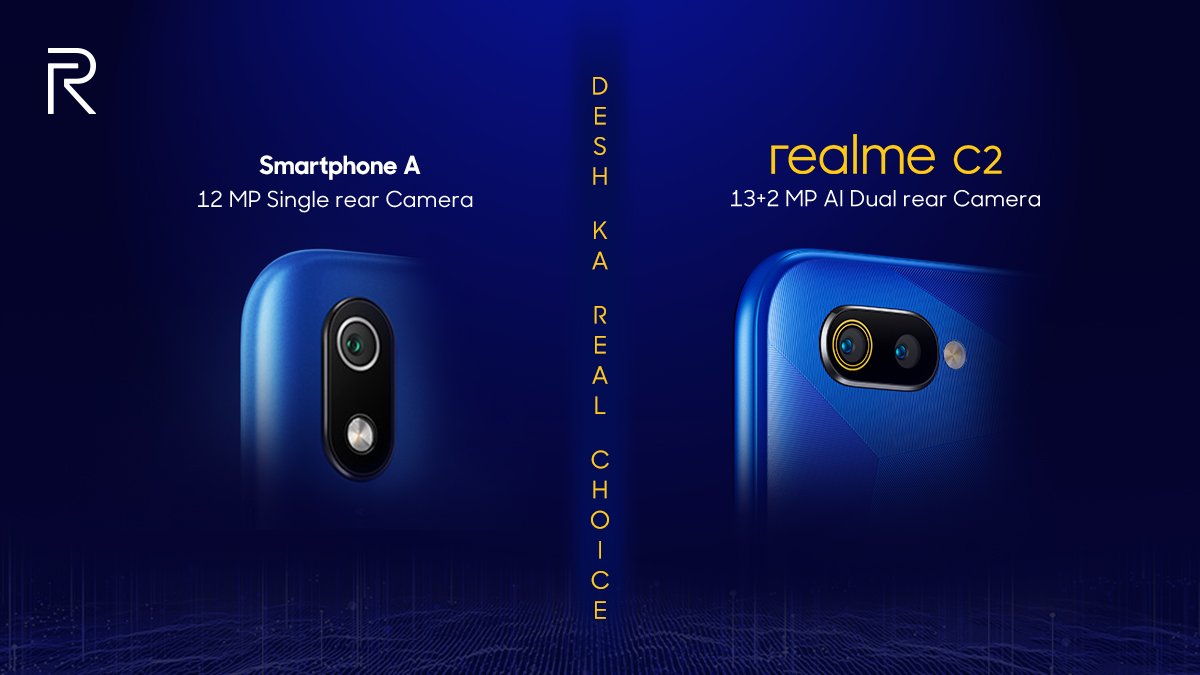 Realme CEO took a jab on the Redmi 7A by referring its Realme C2 smartphone as ‘Desh ka Real Choice’.

Xiaomi just yesterday introduced its latest budget-centric smartphone, the Redmi 7A, which it terms as ‘Smart Desh ka Smartphone’. However, soon after the launch, Realme CEO took a jab on the Redmi 7A by referring its Realme C2 smartphone as ‘Desh ka Real Choice’.

Realme CEO Madhav Sheth, in a series of tweets, compared the Realme C2 with the Redmi 7A. He first compared the full specs comparison of both the smartphones and he further added that Xiaomi is using ‘two years old display’, while Realme is giving its users the dewdrop display. The Redmi 7A comes loaded with a standard 18:9 display, while the Realme C2 is equipped with a 19.5:9 aspect ratio.

Furthermore, he further said, “What should a real value king have? The smart shall not choose a “2 Years Old” single camera.” Madhav is basically comparing the cameras of both smartphones. The Realme C2 is equipped with a dual-camera setup with a combination of 13MP + 2MP rear camera, while the Redmi 7A features a 12-megapixel single-camera setup.

What should a real value king have? The smart shall not choose a “2 Years Old” single camera. #DeshKaRealChoice pic.twitter.com/UvNNjcZIcW

This is not the first time both companies had a word of wars. During the launch of Realme 3 Pro, both the brands took a jab on each other as they were projecting their smartphones to be superior as compared to the other. Manu Jain said that the Snapdragon 675, which is present in Redmi Note 7 Pro, is better than the Realme 3 Pro. While Madhav Sheth took a jab saying that the rival smartphone does not support Fortnite.

To give you a brief, Realme C2 comes with a starting price of Rs 5,999. The smartphone features a 6.1-inch HD+ dewdrop notch display with a screen resolution of 1520 x 720 pixels and Corning Gorilla Glass 3 protection. Under the hood, the smartphone is powered by a 2.0GHz octa-core MediaTek Helio P22 processor. It is backed by a dual-camera setup with a combination of 13-megapixel primary lens along with a 2-megapixel shooter.