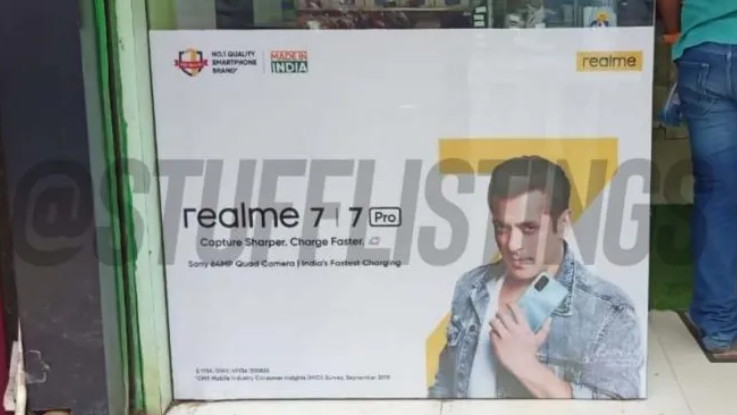 A leaked poster of the upcoming smartphone has emerged online revealing some key details.

Realme recently revealed that it will soon launch Realme 7 series in India. Now, a leaked poster of the upcoming smartphone has emerged online revealing some key details.

The poster reveals that the brand will launch Realme 7 and Realme 7 Pro smartphones in the country. The poster further hints that the upcoming smartphone will be loaded with 64-megapixel quad-rear camera setup. Furthermore, the Realme 7 Pro smartphone will feature “India’s fastest charging”. Additionally, the image also confirms that Bollywood actor Salman Khan will be the brand ambassador for the Realme 7 series. The poster was posted by known tipster Mukul Sharma.

Previously, Realme CEO Madhav Sheth hinted that the company is working to bring the new Realme 7 series to India.

Madhav Sheth took Twitter to tease the launch of the upcoming smartphones. He said, “I can see that you guys were missing me from the past couple of launch events. Well, I was busy making 2 new smartphones for you, and I have to make them Super Good! #BuildingTheFaster7” The hashtag reveals that the upcoming series will be named as Realme 7 series.

Furthermore, he said that he is working on two smartphones, which could be none other than Realme 7 and Realme 7 Pro. Meanwhile, a tipster named as Himanshu has revealed some details about the upcoming Realme 7 series. He claims that the new series will be launched in early September.