Oppo F7 vs Vivo V9: The Twins battle to pay homage to the Phone X 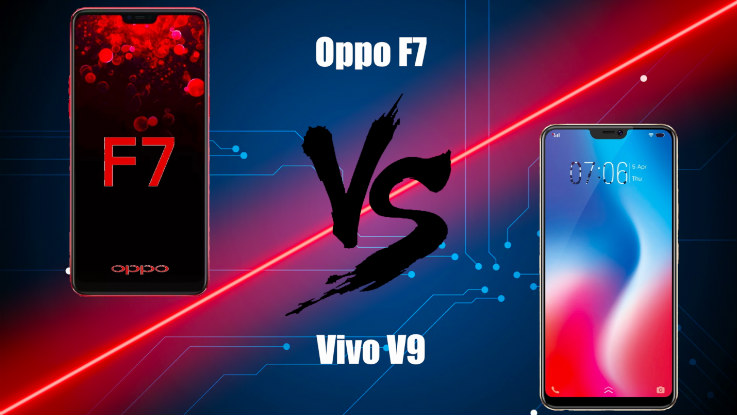 The Oppo F7 and Vivo V9, are early adopters of the new display trend with a notch. But, which one is better?

After much hype and fandom, Oppo has finally launched its latest selfie-centric smartphone, the Oppo F7. The smartphone comes with a price tag of Rs 21,990 for the 64GB variant, while the 128GB option is priced at Rs 26,990.

With this, Oppo has duly joined the herd when it comes to giving a bezel-less display. Yes, we are talking about the Apple iPhone X-like notch the phone bears at the top. And it’s not the only one. Its rival twin Vivo recently brought its latest Vivo V9 with the same design, almost similar display and selfie camera at a price of Rs 22,990. So, the question here is: which one has done a better job with the ‘inspiration’? Let’s find out.

To start with the design first, in an unfortunate reminder of the early days of Chinese handsets that would copy the latest features in next to no time, both, the Oppo F7 and Vivo V9, are early adopters of the new display trend with a notch. Both of them sport a notch on the top that houses afront-facing camera and both of them look eerily similar to each other .

You get the same bezel-less display up front and same glossy finish on the back. The only way one can differentiate between both the devices is the back panel. The Vivo V9 comes with a dual-camera setup, while the Oppo F7 bears a single camera. The phone specs are almost similar as well. The Oppo F7 is just 7.8mm thin, while the Vivo model is 7.89mm. The latter weighs 150 grams, while the former weighs 158 grams. Like, we said it is not easy to differentiate two phones with naked eyes. Both the smartphones are a ‘homage’ to the Apple iPhone X and so, hence the winner is clear here!

Coming to display department, the Oppo F7 bears a 6.23-inch Full HD+ display with a screen resolution of 2280 x 1080 pixels along with aspect ratio 19:9, and 89.9 percent screen-to-body ratio.The Vivo V9 sports a 6.3-inch Full HD+ display with same screen resolution as mentioned above along with 90 percent screen-to-body ratio. The screen in Vivo V9 is 0.07 more than the display found in Oppo F7. The display is virtually the same and once again it is not easy to differentiate two phones with naked eyes.

This is where you get a breather and can actually compare the two devices. The Oppo F7 is powered by an octa-core MediaTek Helio P60 processor clocked at 2.0 GHz along with Mali-G72 MP3 GPU. The Vivo V9 is powered by an octa-core Qualcomm Snapdragon 626 processor clocked at 2.2GHz along with Adreno 506 GPU. Both the smartphones are backed by a 4GB of RAM and 64GB of internal storage. The processor used in Vivo V9 can also be found in smartphones like Xiaomi Redmi Note 5 Pro, which is priced Rs 13,999 for the 64GB RAM option.

Coming to the software, both the smartphones run on Android 8.1 Oreo. The Oppo F7 comes with Color OS 5.0, while the one present in Vivo V9 is FunTouch OS 4.0. Oppo claims that AI integration in the Oppo F7 makes it faster than its predecessor and the brand has added new AI-centric features as well.

The Vivo V9 also comes with AI features and the brand has added AI Smart Engine, that bosts the performance of the device by taking care of storage management and monitoring app usage. That said, the FunTouch OS 4.0 look eerily similar to Apple’s iOS platform, while the one present in Oppo is also inspired by the Cupertino-based giant’s user interface. It all boils down to consumer preference. Those who like Vivo’s user interface will like this FunTouch OS, while the ones who have used Oppo devices in the past, will obviously be comfortable with the ColorOS 5.0.

On the camera front, the Oppo F7 features a 25-megapixel selfie camera with real-time preview along with AI Beauty Technology 2.0, AR stickers, bokeh effect and more. For the rear, there will be a 16-megapixel shooter along with LED flash.

The Vivo V9 features dual rear cameras with a combination of 16-megapixel and 5-megapixel sensors along with LED flash. For the front, there will be a 24-megapixel shooter with a wide-angle lens.Both the smartphones come loaded with AI face beauty and AR Stickers. The Vivo V9 has an advantage of dual-camera setup at the back, which is missing on Oppo F7. Further, the selfie camera is almost similar in megapixel count. So, with dual-camera setup, Vivo V9 wins this round.

On the battery front, the Oppo F7 is backed by a 3400mAh battery with fast charging. The Vivo V9 is juiced up by a 3260mAh battery. The difference is minute, but Oppo F7 surely has a better battery backup as compared to the Vivo V9. On the connectivity front, both the phones feature 4G VoLTE, Wi-Fi 802.11 a/b/g/n/ac, dual-band, WiFi Direct, Bluetooth v4.2 and GPS.

To conclude, the Oppo F7 and Vivo V9 are pretty much the same on the outside and almost similar on the inside. Both of them are twins in almost every department. The Oppo F7 has an advantage of the processor, while the Vivo V9 has an edge in the camera department with a dual-camera setup. So, it is safe to say the battle between two will make finding a winner very tough for buyers. Since both sell on the selfie pitch, the better camera might just give the Vivo V9 that decisive edge.