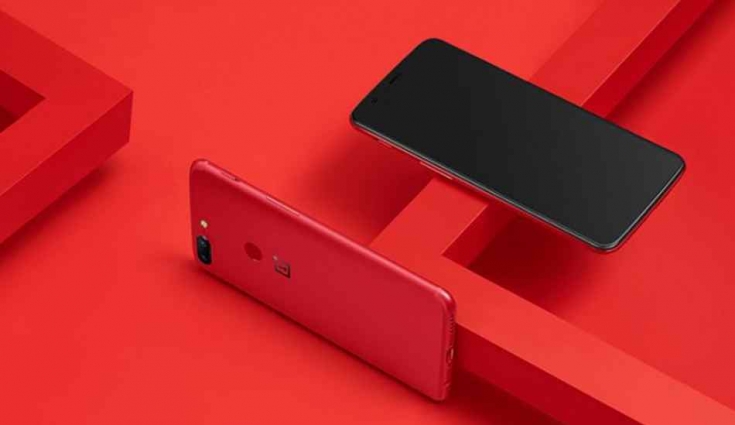 The variant is currently available exclusively in the Chinese market.

Recently we reported that OnePlus 5T Lava Red variant is expected to launch on January 26 in India. However, as per a new report, the company could launch the device earlier than expected.

According to the report on Techook, the OnePlus 5T Lava Red could launch on 23rd January instead of January 26. However, we advise you to take this with a pinch of salt as the launch date is just a speculation and nothing official has been announced by OnePlus yet regarding the same.

OnePlus unveiled a limited edition Lava Red colour variant of it’s latest flagship device, the OnePlus 5T, in China in November last year. The variant is available for 8GB RAM variant and it comes with a price tag of Yuan 3499 (approx. Rs 35,000).

The 162 grams weighing phone is just 7.3 mm thin and comes in 6 GB and 8 GB RAM variants. Made of Anodized Aluminium, the OnePlus 5T comes with Android 7.1.1 Nougat based OxygenOS. Underneath the beautiful body lies the powerful Qualcomm Snapdragon 835 processor and Adreno 540 GPU.

It has 3300 mAh battery and comes with the Dash Charger. As expected, the phone has the audio jack. Besides, it has USB Type C port, dual nano-SIM slot, fingerprint sensor, Accelerometer, G-sensor, Electronic Compass, Gyroscope, Proximity, Ambient Light Sensor, RGB and Sensor Hub. There are on-screen navigational support, power button, volume rocker and Alert Slider in the OnePlus 5T.

There are bottom facing speakers in the phone apart from three microphones for noise cancellation. With Dirac HD Sound technology it promises to be a great entertainer. Of course, it has WiFi (a/b/g/n/ac), Bluetooth 5.0, GPS (with GLONASS and BeiDou and Galileo), NFC and 4G connectivities.

It comes with two rear cameras with portrait mode, video stabilisation and low light photography ability. The main 16 MP camera has 1.12µm pixel size and aperture of f/1.7 while the secondary 20 MP camera has a pixel size of 1.0 µm and aperture of f/1.7. There are two LED flashlights in the rear panel as well. A 16 MP front camera is there in the 5T that can record full HD videos too. The phone comes in 64 and 128 GB storage variants.