HTC has announced its new Sensation XL smartphone with Android Gingerbread and Beats Audio smartphone at the Beats Event in London.

However, countless applications for Android platform are built to support the WVGA as the best makes the WVGA native resolution an obvious choice for Sensation XL.

Under the 9.9mm thick chassis, the smartphone runs a single-core 1.5 GHz Qualcomm Snapdragon MSM8255 processor coupled with Adreno 205 graphics chip and 768 MB RAM. This hardware is decent enough to run the Android 2.3.x Gingerbread update with layer of new HTC Sense 3.5 smoothly on it.

By default the smartphone has 16 GB onboard storage out of which only 12.64 GB is actually available to the user. For those who wish to add more storage can make us of the micro SD card slot that can hold up to 32 GB memory card. Interesting part of this handset is that it supports the m4a and m4v file formats which are typically used for the Apple iOS devices for high quality Audio and Video. 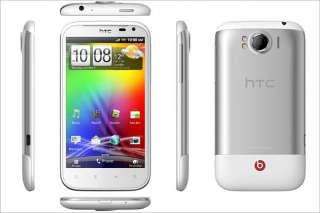 The unique aspect of the Sensation XL smartphone is that it comes pre-loaded with the Beats Audio music profiles to complement the bundled urBeats headsets. The urBeats headphones come with line-in remote and microphone. The Beats profiles are loaded as soon as they are plugged in to the smartphone through the 3.5mm audio port.

HTC did not specify the price of this handset but promised that the same would be available in UK soon from Three and O2 network operators. Also, no specific date of release in the USA or other regions was shared at the launch of HTC Sensation XL.