Lenovo L38083 has surfaced on GeekBench website which reveals that the Lenovo L38083 will be powered by MediaTek’s MT6762V processor.

Seems like Lenovo is working on yet another budget smartphone as a new mysterious device from the brand has emerged online. Lenovo’s new smartphone with the name Lenovo Lenovo L38083 has been spotted on a popular benchmarking website. The listing has revealed quite a few specs of the Lenovo phone.

Lenovo L38083 has surfaced on GeekBench website which reveals that the Lenovo L38083 will be powered by MediaTek’s MT6762V processor which is also known as the Helio P22. The 12nm octa-core processor is clocked at 2.0GHz and comes with a PowerVR GPU. 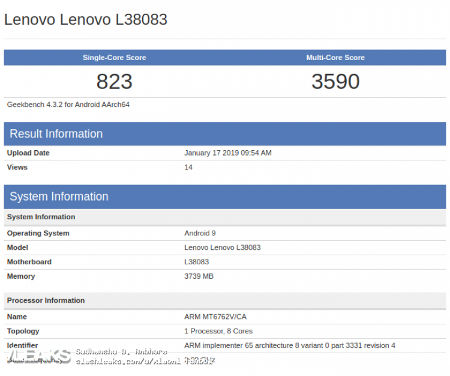 The listing further reveals that the smartphone will come with 4GB of RAM and it runs Android 9 Pie out of the box. In the listing, the phone has scored 823 in the single-core test and 3590 in the multi-core test. From the specs, we expect Lenovo phone to be a mid-range smartphone.

It is currently not known what will be the final name of Lenovo L38083, however, as per reports, the device might be the successor of the Lenovo K5 (2018), likely to be called as K6.

There is no information about the pricing and availability of the device as yet, however, since the phone has now been spotted GeekBench, we expect the phone to surface in more leaks as well in coming days. So we request you to stay updated on our website for the same.