The smartphone is expected to be another variant of Moto M2 smartphone.

A new Motorola smartphone with model number XT1902-2 has got WiFi certification from the WiFi Alliance (WFA). Recently, Lenovo XT1902-3 with Android Nougat and Helio X20 SoC was spotted on a GeekBench benchmarking website which as per multiple reports, might be Moto M2. Since the new spotted device has almost the same model number as of Lenovo XT1902-3, it is expected to be another variant of Moto M2 smartphone.

As per the listing, Moto XT1902-2 will support single-band Wi-Fi a/b/g/n (2.4GHz) and Wi-Fi Direct connectivity features. Sadly, the listing does not show any specifications except that the device will be powered by Android 7.1.1 Nougat operating system and has a MT6757CH a.k.a Helio P20 processor. The listing has the certification ID WFA72379 and the date of certification being 13th June 2017. 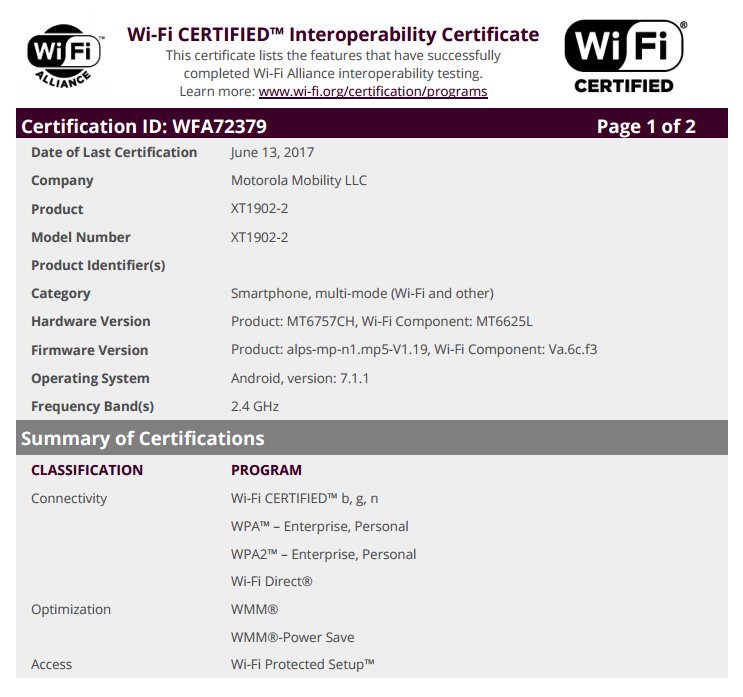 As per the earlier leaked GeekBench listing, the Lenovo XT1902-3 got 1163 points in single-core test and in multi-core test it received 4836 points. The listing shows that the Lenovo XT1902-3 has 4GB RAM and MediaTek Helio X20 1.85 GHz deca-core processor. The handset is based on the Android 7.1.1 Nougat operating system.

However, there are no any official words regarding the launch date and the actual name of this upcoming smartphone at the moment. But now since the smartphone has started surfacing online, we expect more specifications details to surface soon. So, Stay Tuned to The Mobile Indian for more updates on this.

Moto M2 will be the successor of Moto M smartphone which was launched with Helio X15 chipset in India last year. To recall, Moto M comes with a 5.5-inch Full HD (1920 x 1080 pixels) Super AMOLED display. For the memory, the device comes in two variants – 3GB RAM with 32GB of internal storage and 4GB RAM with 64GB of internal storage which will be further expandable up to 128GB via microSD. The Moto M features a fingerprint scanner at the back. Running on Android 6.0.1 Marshmallow, Moto M is powered by an Octa-Core 2.2 GHz MediaTek Helio P15 CPU coupled with Mali-T860 MP2 GPU.