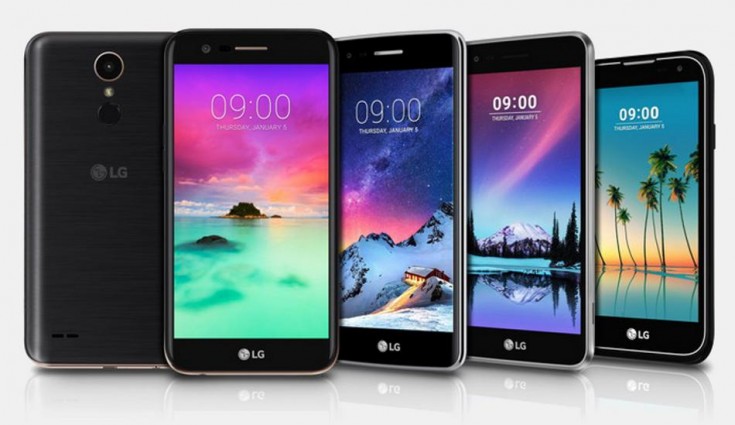 LG is all set to launch 2017 K-series smartphones in India this week. Company is already sent out the media invites for an event which is scheduled to take place on February 22. The smartphones will be unveiled by the Union IT Minister, Ravi Shankar Prasad in the presence of Kim Ki Wan, MD, LG India.

Here are the specifications of all four K-series smartphones:

The LG K3 comes with a 4.5-inch FWVGA display with resolution of 854 x 480 pixels and is powered by a 1.1 GHz quad-core Qualcomm Snapdragon 210 processor along with Adreno 304 GPU. It offers a 5-megapixel rear camera with LED flash and 2-megapixel front facing cameras and runs on 2,100mAh battery backup. The smartphone has 1GB of RAM, 8GB of internal storage, which option to expand storage upto 32GB via microSD card. The smartphone comes with Android 6.0.1 Marshmallow and support connectivity options like 4G LTE, Wi-Fi (802.11 b, g, n), Bluetooth 4.1 and USB 2.0 Type B. The device measures at 133.9 x 69.75 x 9.44 mm and weighs 132 grams. It will be available in black colour option.

Moving on to the LG K4 (2017), the device is the successor of the original of K4 and sports a 5.0-inch FWVGA In-cell Touch display. As for the specs, it comes with Qualcomm Snapdragon 210 processor, 5-megapixel rear and front camera with rear LED flash and runs on Android 6.0.1 Marshmallow. The phone offers 1GB of RAM, 8GB of internal memory, which is further expandable upto 32GB with microSD card. The device is powered by a 2,500mAh battery and support connectivity options like 4G LTE, Wi-Fi (802.11 b, g, n), Bluetooth 4.1 and USB 2.0 Type B. Skipping the gold this time, the smartphone will be available in titan and black colour variants.

The LG K8 comes with a 5-inch HD display with a screen resolution of 1280×720 pixels. The smartphone is powered by a 1.4GHz quad-core Qualcomm Snapdragon 425 processor with Adreno 308 GPU and comes with 13-megapixel rear and 5-megapixel front camera. The device runs on Android 7.0 Nougat and is juiced by a 2,500mAh removable battery. The smartphone has 1.5GB of RAM and 16GB of internal storage, which can be further expandable up to 32GB with microSD card. On the connectivity front, the device supports 4G LTE, Wi-Fi (802.11 b, g, n), Bluetooth 4.2, USB 2.0 Type B and NFC. The handset measures 144.8 x 72.1 x 8.09mm and weights 142 grams. Lastly, the smartphone will be available in silver, titan, dark blue and gold colour variants.

The K10 boasts a 5.3-inch HD In-cell Touch display with 2.5D Arc Glass design. The main highlight of the smartphone is the 5-megapixel front camera which comes with 120-degree wide-angle lens coupled with a metallic U-frame which gives the device a sturdy and slim look. As for the specs, the device is powered by a 1.5 GHz Octa-Core MediaTek MT6750 processor with with Mali T860 GPU, 13-megapixel rear camera with LED flash, fingerprint sensor and 2,800mAh removable battery. The smartphone comes with 2GB RAM, 16GB/32GB of internal storage, with option to expand up to 2TB with microSD card. The device will be running on the latest Android 7.0 Nougat and comes with connectivity options like 4G LTE, Wi-Fi (802.11 b, g, n), Bluetooth 4.2, USB 2.0 Type B and NFC. The smartphone will be available in black, titan and gold colour variants.